Welcome to the LitCharts study guide on Lois Lowry's Number the Stars. Created by the original team behind SparkNotes, LitCharts are the world's best literature guides.

A concise biography of Lois Lowry plus historical and literary context for Number the Stars.

A quick-reference summary: Number the Stars on a single page.

In-depth summary and analysis of every chapter of Number the Stars. Visual theme-tracking, too.

Explanations, analysis, and visualizations of Number the Stars's themes.

Description, analysis, and timelines for Number the Stars's characters.

Explanations of Number the Stars's symbols, and tracking of where they appear.

An interactive data visualization of Number the Stars's plot and themes.

Lois Lowry was born in Honolulu, Hawaii, the daughter of an Army dentist whose career necessitated the Lowry family’s moving from place to place throughout the young Lois’s childhood. Lois and her family lived in Japan, Brooklyn, and Pennsylvania. After two years of college at Brown University in Rhode Island, Lowry married a U.S. Naval officer in 1956. Again, Lowry found herself relocating frequently due to her husband’s career, and eventually she and her family settled down in Maine, where Lowry completed a degree in English Literature and nursed her passions for photography and writing. Today, Lowry’s novels for children are bestsellers all around the world—her book The Giver is one of the most lauded teen reads of all time, and Number the Stars has received the Newbery Medal and the National Jewish Book Award. Her “Anastasia” books, which follow middle schooler Anastasia Krupnik through a series of everyday trials and tribulations, have proven controversial but essential teen reading. Lowry currently lives and writes in Massachusetts.
Get the entire Number the Stars LitChart as a printable PDF.
"My students can't get enough of your charts and their results have gone through the roof." -Graham S.
Download 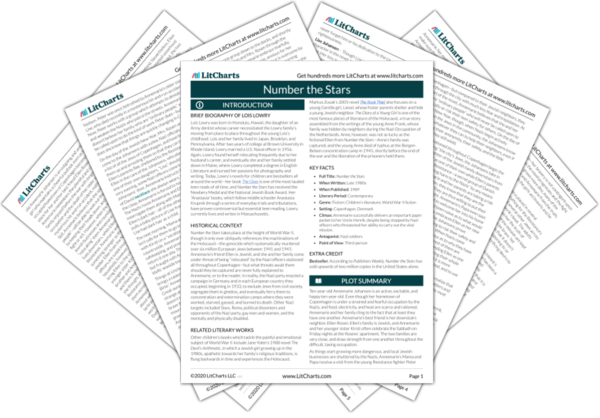 Historical Context of Number the Stars

Number the Stars takes place at the height of World War II, though it only ever obliquely references the machinations of the Holocaust—the genocide which systematically murdered over six million European Jews between 1941 and 1945. Annemarie’s friend Ellen is Jewish, and she and her family come under threat of being “relocated” by the Nazi officers stationed all throughout Copenhagen—but what threats await them should they be captured are never fully explained to Annemarie, or to the reader. In reality, the Nazi party enacted a campaign in Germany and in each European country they occupied, beginning in 1933, to exclude Jews from civil society, segregate them in ghettos, and eventually ferry them to concentration and extermination camps where they were worked, starved, gassed, and burned to death. Other Nazi targets included Slavs, Roma, political dissenters and opponents of the Nazi party, gay men and women, and the mentally and physically disabled.

Other Books Related to Number the Stars

Other children’s books which tackle the painful and emotional subject of World War II include Jane Yolen’s 1988 novel The Devil’s Arithmetic, in which a Jewish girl growing up in the 1980s, apathetic towards her family’s religious traditions, is flung backwards in time and experiences the Holocaust. Markus Zusak’s 2005 novel The Book Thief also focuses on a young Gentile girl, Liesel, whose foster parents shelter and hide a young Jewish neighbor. The Diary of a Young Girl is one of the most famous pieces of literature of the Holocaust, a true story assembled from the writings of the young Anne Frank, whose family was hidden by neighbors during the Nazi Occupation of the Netherlands. Anne, however, was not as lucky as the fictional Ellen from Number the Stars—Anne’s family was captured, and the young Anne died of typhus at the Bergen-Belsen concentration camp in 1945, shortly before the end of the war and the liberation of the prisoners held there.
Key Facts about Number the Stars

Extra Credit for Number the Stars

Bestseller. According to Publishers Weekly, Number the Stars has sold upwards of two million copies in the United States alone. 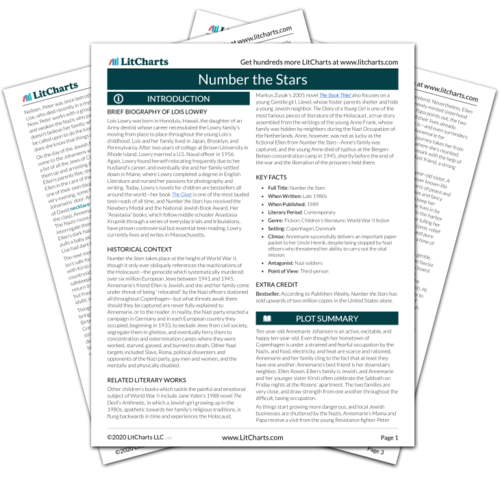 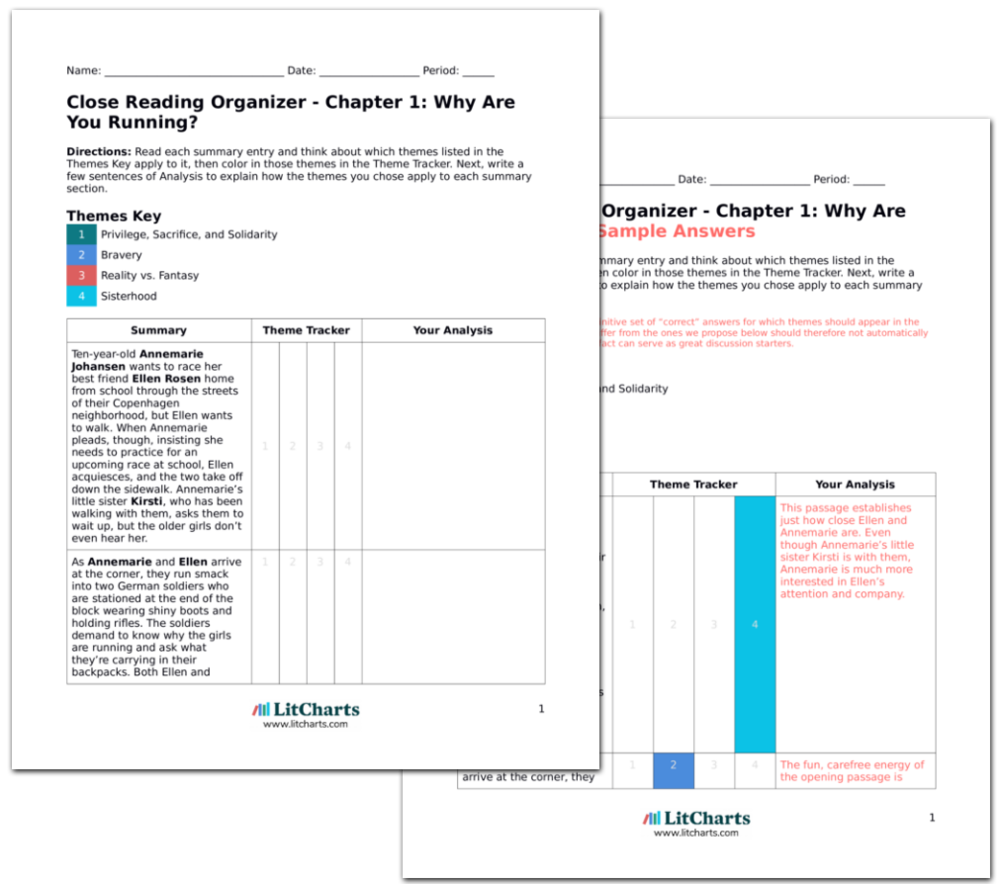