Download this LitChart! (PDF)
Teachers and parents! Struggling with distance learning? Our Teacher Edition on My Boy Jack can help.

Welcome to the LitCharts study guide on David Haig's My Boy Jack. Created by the original team behind SparkNotes, LitCharts are the world's best literature guides.

A concise biography of David Haig plus historical and literary context for My Boy Jack.

A quick-reference summary: My Boy Jack on a single page.

In-depth summary and analysis of every scene of My Boy Jack. Visual theme-tracking, too.

Explanations, analysis, and visualizations of My Boy Jack's themes.

Description, analysis, and timelines for My Boy Jack's characters.

Explanations of My Boy Jack's symbols, and tracking of where they appear.

An interactive data visualization of My Boy Jack's plot and themes.

David Haig was born in England in 1955. His mother was an opera singer, and his father was an army officer, later becoming the director of the Hayward Gallery—a well-known art gallery in London. As an actor, Haig has appeared in many plays, television shows, and movies, including numerous engagements with the Royal Shakespeare Company. His first play, My Boy Jack, premiered in 1997 and was later adapted as a movie for television starring Haig himself as Rudyard Kipling and Daniel Radcliffe as his son, Jack. Haig’s second play premiered in 2000, followed by his third, Pressure, in 2014. In 2013, he became a member of the Order of the British Empire, an honor that celebrates individuals who have made significant contributions to the arts (among other fields).
Get the entire My Boy Jack LitChart as a printable PDF.
"My students can't get enough of your charts and their results have gone through the roof." -Graham S.
Download 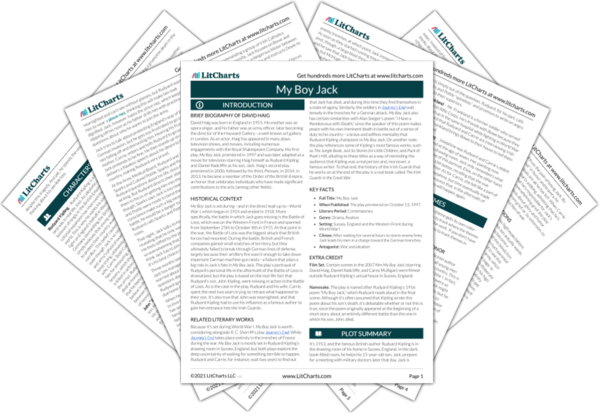 Historical Context of My Boy Jack

My Boy Jack is set during—and in the direct lead-up to—World War I, which began in 1914 and ended in 1918. More specifically, the battle in which Jack goes missing is the Battle of Loos, which was on the Western Front in France and spanned from September 25th to October 8th in 1915. At that point in the war, the Battle of Loos was the biggest attack that British forces had mounted. During the battle, British and French companies gained small snatches of territory, but they ultimately failed to break through German lines of defense, largely because their artillery fire wasn’t enough to take down important German machine-gun nests—a failure that plays a big role in Jack’s fate in My Boy Jack. The play’s portrayal of Rudyard’s personal life in the aftermath of the Battle of Loos is dramatized, but the play is based on the real-life fact that Rudyard’s son, John Kipling, went missing in action in the Battle of Loos. As is the case in the play, Rudyard and his wife, Carrie, spent the next two years trying to retrace what happened to their son. It’s also true that John was nearsighted, and that Rudyard Kipling had to use his influence as a famous author to gain him entrance into the Irish Guards.

Other Books Related to My Boy Jack

Because it’s set during World War I, My Boy Jack is worth considering alongside R. C. Sherriff’s play Journey’s End. While Journey’s End takes place entirely in the trenches of France during the war, My Boy Jack is mostly set in Rudyard Kipling’s drawing room in Sussex, England, but both plays explore the deep uncertainty of waiting for something terrible to happen. Rudyard and Carrie, for instance, wait two years to find out that Jack has died, and during this time they find themselves in a state of agony. Similarly, the soldiers in Journey’s End wait tensely in the trenches for a German attack. My Boy Jack also has certain similarities with Alan Seeger’s poem “I Have a Rendezvous with Death,” since the speaker of this poem makes peace with his own imminent death in battle out of a sense of duty to his country—a brave and selfless mentality that Rudyard Kipling champions in My Boy Jack. On another note, the play references some of Kipling’s most famous works, such as The Jungle Book, Just So Stories for Little Children, and Puck of Pook’s Hill, alluding to these titles as a way of reminding the audience that Kipling was a real person and, moreover, a famous writer. To that end, the history of the Irish Guards that he works on at the end of the play is a real book called The Irish Guards in the Great War.
Key Facts about My Boy Jack

Extra Credit for My Boy Jack

Namesake. The play is named after Rudyard Kipling’s 1916 poem “My Boy Jack,” which Rudyard reads aloud in the final scene. Although it’s often assumed that Kipling wrote this poem about his son’s death, it’s debatable whether or not this is true, since the poem originally appeared at the beginning of a short story about an entirely different battle than the one in which his son, John, died. 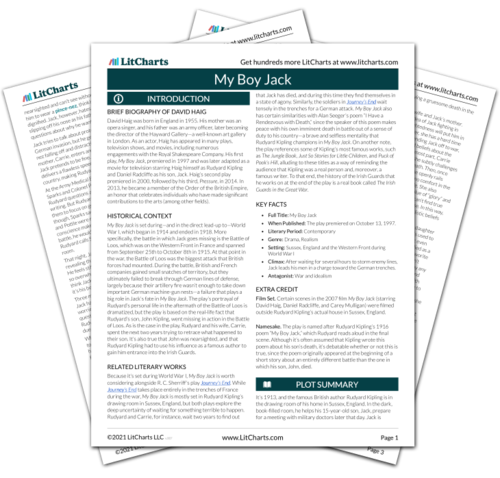 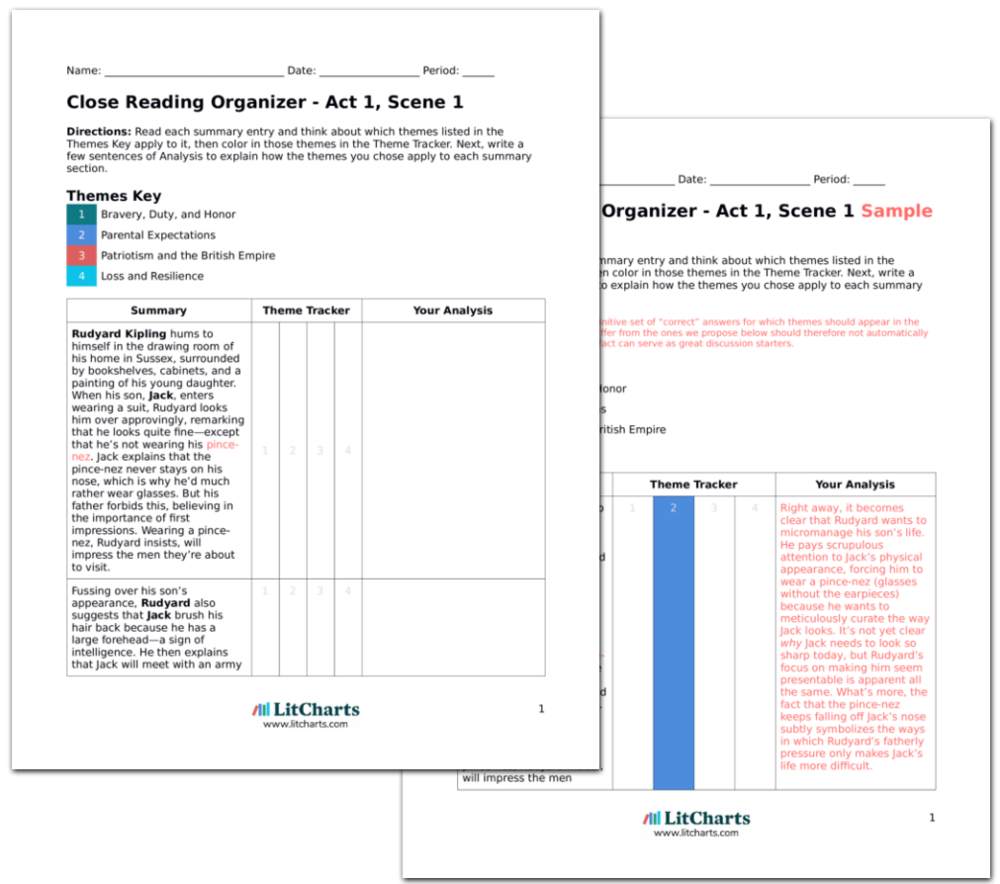