Welcome to the LitCharts study guide on Richard Wright's Native Son. Created by the original team behind SparkNotes, LitCharts are the world's best literature guides.

A concise biography of Richard Wright plus historical and literary context for Native Son.

A quick-reference summary: Native Son on a single page.

In-depth summary and analysis of every chapter of Native Son. Visual theme-tracking, too.

Explanations of Native Son's symbols, and tracking of where they appear.

An interactive data visualization of Native Son's plot and themes.

Richard Wright was born in rural Mississippi, lived for a time near Memphis, Tennessee, and Jackson, Mississippi, and was raised mostly by female relatives in his extended family. His father left the family when Wright was a child, and his mother worked a series of menial jobs before suffering strokes between 1918 and 1920, requiring medical care for the rest of her life. Having performed well academically until he was forced, in high school, to drop out and begin working, Wright relocated, in 1927, to Chicago—a city that would allow Wright to develop as a writer and thinker, and in which his novel Native Son was based. One of Wright’s jobs in Chicago was mail sorter at the Post Office. As a young man, Wright read widely in modern English and American literature, as well as translated literature from continental Europe. Wright joined, for a time, the Communist Party in Chicago, and after writing a first novel (Lawd Today, eventually published in 1963), he moved to New York City in 1937 and wrote, in 1938 and 1940, respectively, the short-story collection Uncle Tom’s Children and the novel Native Son, which launched his career. Wright’s Black Boy, a somewhat fictionalized tale of his young life, was released in 1945 and added to his fame. Wright moved to Paris in 1946, and lived there, primarily, until his death in 1960. Wright was an inspiration for other African-American writers, including Ralph Ellison (author of Invisible Man) and James Baldwin; the latter would go on to critique Wright’s work severely, but with the acknowledgment of its influence on his own.
Get the entire Native Son LitChart as a printable PDF.
"My students can't get enough of your charts and their results have gone through the roof." -Graham S.
Download 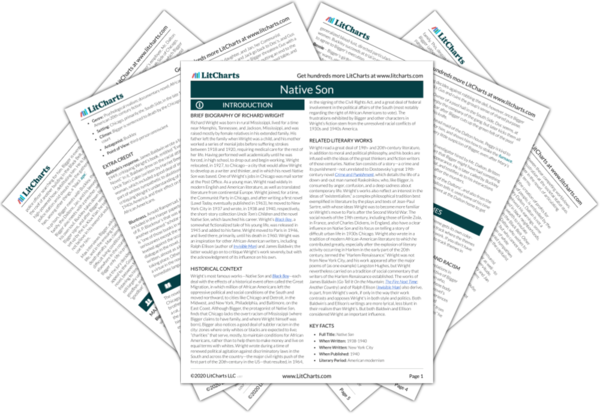 Wright’s most famous works—Native Son and Black Boy—each deal with the effects of a historical event often called the Great Migration, in which million of African Americans left the oppressive political and social conditions of the South and moved northward, to cities like Chicago and Detroit, in the Midwest, and New York, Philadelphia, and Baltimore, on the East Coast. Although Bigger, the protagonist of Native Son, finds that Chicago lacks the overt racism of Mississippi (where Bigger claims to have family, and where Wright himself was born), Bigger also notices a good deal of subtler racism in the city: zones where only whites or blacks are expected to live; “charities” that serve, mostly, to maintain conditions for African Americans, rather than to help them to make money and live on equal terms with whites. Wright wrote during a time of renewed political agitation against discriminatory laws in the South and across the country—the major civil rights push of the first part of the 20th-century in the US—that resulted, in 1964, in the signing of the Civil Rights Act, and a great deal of federal involvement in the political affairs of the South (most notably regarding the right of African Americans to vote). The frustrations exhibited by Bigger and other characters in Wright’s fiction stem from the unresolved racial conflicts of 1930s and 1940s America.

Other Books Related to Native Son

Wright read a great deal of 19th- and 20th-century literature, in addition to moral and political philosophy, and his books are infused with the ideas of the great thinkers and fiction writers of those centuries. Native Son consists of a story—a crime and its punishment—not unrelated to Dostoevsky’s great 19th-century novel Crime and Punishment, which details the life of a down-and-out man named Raskolnikov, who, like Bigger, is consumed by anger, confusion, and a deep sadness about contemporary life. Wright’s works also reflect an interest in the ideas of “existentialism,” a complex philosophical tradition best exemplified in literature by the plays and texts of Jean-Paul Sartre, with whose ideas Wright was to become more familiar on Wright’s move to Paris after the Second World War. The social novels of the 19th century, including those of Emile Zola, in France, and of Charles Dickens, in England, also have a clear influence on Native Son and its focus on telling a story of difficult urban life in 1930s Chicago. Wright also wrote in a tradition of modern African-American literature to which he contributed greatly, especially after the explosion of literary activity occurring in Harlem in the early part of the 20th century, termed the “Harlem Renaissance.” Wright was not from New York City, and his work appeared after the major poems of (as one example) Langston Hughes, but Wright nevertheless carried on a tradition of social commentary that writers of the Harlem Renaissance established. The works of James Baldwin (Go Tell It On the Mountain; The Fire Next Time; Another Country) and of Ralph Ellison (Invisible Man) also derive, in part, from Wright’s work, if only in the way their work contrasts and opposes Wright's in both style and politics. Both Baldwin’s and Ellison’s writings are more lyrical, less blunt in their realism than Wright’s. But both Baldwin and Ellison considered Wright an important influence.
Key Facts about Native Son

Baldwin’s response. James Baldwin wrote a famous essay, in 1949, critiquing Wright’s book, entitled “Everybody’s Protest Novel.” In it, Baldwin drew on the racial attitudes implicit in Uncle Tom’s Cabin (written by Harriet Beecher Stowe, a white woman, which included a good deal of implicit racism on the part of whites sympathetic to abolitionism) as a means of critiquing Wright’s understanding of political conditions in 1940s America, and their effect on the attitudes of young African Americans.

Bluntness. Arnold Rampersad, in his introduction to Native Son included in the Harper paperback edition, refers to a quotation of R. P. Blackmur’s that was applied, as Rampersad notes, by another unnamed “scholar-critic,” to Native Son: namely, that it is “one of those books in which everything is undertaken with seriousness except the writing.” This complaint is sometimes leveled against the occasional woodenness of description and dialogue in the novel, and a sense that the novel was speedily written, almost as a kind of reportage of the events as they are taking place. Other critics, however, argue that this bluntness is a virtue in the novel—an attempt to capture, in “real” and immediate language, the events of Bigger’s life as they unfold.