Download this LitChart! (PDF)
Teachers and parents! Struggling with distance learning? Our Teacher Edition on On Liberty can help.

John Stuart Mill explains that he wants to explore the question of how much power a society or government can rightly exert over individual lives. From time immemorial, human civilization has been characterized by the struggle between individual liberty and authority, culminating in the idea that liberty really means freedom and protection from tyranny or oppression. Historically, the result was that some groups (including Americans) established representative governments with elected leaders that hold temporary positions and can be removed from office if society wills it.

However, tyranny isn’t just political—it can be social as well. When a government represents the will of the people, it actually only represents the will of the majority, which is imposed on all members of society regardless of whether it reflects their individual wills or not. This is called the tyranny of the majority and it can be applied to social situations, too. When the majority of a society holds certain opinions about individual conduct and acceptable behavior, it has its own ways of punishing those who go against it. Because of this possibility, society must determine how much public opinion should influence individual liberty and then actively protect itself from the potentially overbearing power of public opinion. It is necessary to establish rules that prohibit actions that might encroach upon the liberty of other people; however, neither government nor society has the authority to determine what people can or cannot do if their actions only affect themselves.

The government is right to interfere in individual lives if doing so is in the best interest of society in general. This means that the government—or society—can interfere if the actions of an individual either harm or risk harming other people in some way. When it comes to individual conduct, however, people have absolute control over their decisions and actions (only so long as they don’t infringe on someone else’s rights, that is). Furthermore, this control only applies to reasonable adults, not minors. Mill writes that individual liberty means that all people have a right to form and share their personal opinions and thoughts, to choose their own paths in life, and to congregate with other people for any reason other than to do harm to someone else. Society, however, tries to control individual liberty and individuality by compelling people to conform to popular opinion, either through legislation or by propagating negative opinions about those who don’t conform. Mill acknowledges that the full question of liberty is broad, and so he will limit the topics he explores to individual liberty—individuality of thought or action, as well as the power society has (or should have) over individual lives.

Mill asserts that the time for debating the necessity of the freedom of the press is past (or at least he hopes it is) and instead turns his attention to how people form their own opinions—or don’t, if they feel they must adopt prevailing opinions. Mill writes that society tries to silence unpopular opinions to protect the status quo, but actually risks hurting itself in the process. When society silences an opinion, it robs itself of the opportunity to discuss a new idea that might actually be true and help society improve itself. On the other hand, if this opinion is not true, then silencing it prevents society from discussing why it’s a false opinion and how this discovery supports the truth of other opinions. More importantly, free discussion on diverse opinions is necessary to a society’s health because it helps prevent it from adhering to opinions and customs mechanically instead of truly understanding them. This includes being open to hearing criticism of accepted opinions, which helps people discover hidden truths that can improve their lives. Mill believes it is one of humanity’s chief virtues that people are capable of changing and adapting when a better mode of living is presented to them, but even this can only be achieved if people are free to discuss their mistakes, gain firsthand experience with them, and hear arguments in favor of diverging opinions. Additionally, frequent discussion and even argument over an opinion’s truth is vital to keeping the meaning of that opinion alive in people’s minds.

Even though having a diversity of opinions and the freedom to discuss them is so beneficial to society, people in the modern day are still penalized for harboring opinions that oppose the majority’s opinion. These penalties are not as harsh as they used to be—nobody is executed for having a divergent opinion—but Mill worries that they might get worse due to religion’s surging popularity in English society. When someone determines that an opinion is immoral, for example, the person who holds the opinion might face social stigma or even legal punishment for it. Unfortunately, this kind of punishment creates an environment that is not conducive to true mental freedom, as more and more people stifle their own thoughts out of fear that they might develop a heretical one. This fear in turn prevents individuals from sharing differing opinions that might contain a kernel of truth that, combined with accepted opinions, could benefit society in general. Ultimately, Mill rejects the idea that legal restraints should be placed on discussing opinions, although public opinion itself might condemn someone for being malicious in the way they share their opinions.

After establishing that the freedom to form, express, and discuss opinions is important to a society’s health, Mill turns his argument to the value of individuality. Mill believes that the real threat to individuality is that people are generally indifferent towards it—they simply don’t understand its value to personal and public happiness. At worst, people see individuality as a social evil that might upset the established order. At the same time, nobody believes that people should just blindly conform to the customs that dictate acceptable social behavior and growth. Mill believes that individuality is a key part of human nature while conformity goes against nature. When people blindly conform to custom, they stop thinking; when they stop thinking, people gradually lose the ability to think for themselves at all.

While past civilization struggled to get people to control their individuality enough to follow social rules, modern civilization faces the opposite problem—trying to get people to throw off the yoke of custom and embrace their individuality. It simply doesn’t occur to a lot of people to think for themselves or follow their natural impulses, and in these conditions much of what makes a person human—energy, originality, independent thought, and so on—risks dying out from neglect. More importantly, individuality is closely linked to originality, which is a necessary element of social progress and establishing new opinions and practices. Mill explains that nobody would argue this point in theory, but more often than not they do oppose it in practice because they struggle to understand it. Instead of originality, mediocrity has gained supremacy in modern society. However, this means that there is a greater need of originality than ever, and Mill encourages readers to embrace their eccentricity and originality rather than suppressing it to keep the peace in society.

Mill addresses the question of how much authority society should have over individual lives. He maintains that all people should be free to do whatever they want so long as their actions don’t hurt anyone else, but he also points out that choosing to engage in activities or actions that are obnoxious to others will result in natural consequences. For example, people will choose to avoid—and warn others to avoid—people whose conduct is generally offensive, even if it’s not illegal. In this way, society penalizes people for consciously making poor choices, but Mill also argues that society is right in punishing people for infringing on others’ rights through deception or taking advantage of them. Furthermore, even if a person doesn’t directly harm another, they can be penalized for how their actions indirectly harm other individuals or society in general, such as when a person gambles away their money instead of paying their debts or taking care of their family. In these cases, however, it’s important to differentiate between penalizing someone for the harm their actions cause others rather than for the action itself (after all, spending money is not in itself immoral; it only becomes so when it negatively affects someone else). In cases where an individual’s conduct hurts nobody but themselves—no matter how unpleasant it may be—society has absolutely no right to interfere with or penalize them.

Mill offers to illustrate various applications of the principles of liberty and individuality that he’s been exploring in order to help readers determine how they might actually be applied in real life. He states that his general doctrine can be summed up in two maxims: that individuals are only accountable to society for their actions that affect other people, and that the individual might be punished by society for harming others. However, society isn’t always justified in interfering on behalf of an injured party—for instance, people are frequently injured by losing a job promotion or a competition, but that doesn’t mean the person who won these things should be punished, unless they used malicious means to win.

Trade is a useful field to apply Mill’s concepts to—it is a social act and therefore falls under society’s jurisdiction, but it also involves the individual liberty of the buyer to a large extent. To explore the power society should have over trade, Mill zeroes in on the sale of poisons. A buyer might be buying a poison for a legitimate reason, but there is always the risk that they will commit a murder with it. Because poison has legal uses, the government should not outright prohibit its sale, but it would be justified in making it more difficult to obtain by requiring sellers to keep careful records of who buys it and when. This is no problem for people who are buying poison for legal reasons, but it might dissuade people who want to commit a murder with poison, because it leaves a paper trail that could be used to indict them for the crime. Similarly, giving advice is a social act, but one which society shouldn’t constrain because it still protected by individual liberty and promotes individual welfare—people should be free to share advice, discuss opinions, or help each other decide on courses of action. The only time giving advice might rightfully be subject to social interference is when the person giving advice is deriving some malicious or selfish benefit (possibly financial benefit) from doing so. Furthermore, one person should not be allowed to have too much freedom over another, as in the case of slavery or even marriage. In general, the greatest possible amount of liberty should be given to people to enjoy a diversity of opinions, discussion, opportunities, beliefs, and even educations, because these things promote progress even if they challenge the social unity that comes from forced conformity to public opinion. Mill believes that a society which forces conformity on all its citizens dwarfs itself and hinders its collective ability to achieve greatness, because a state’s worth and potential are directly proportional to the strength, individuality, originality, and intelligence of the individual people who make it up. 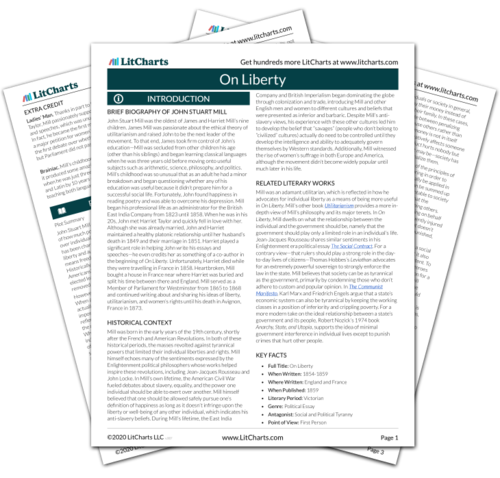 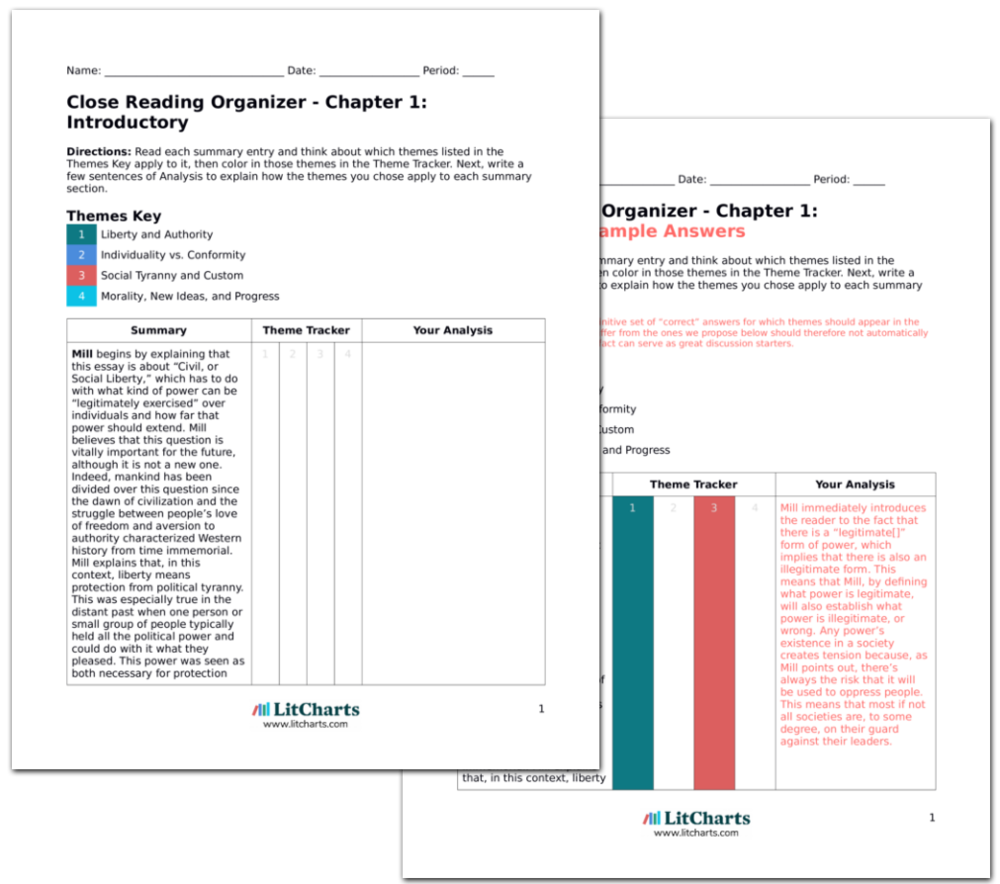