Download this LitChart! (PDF)
Teachers and parents! Struggling with distance learning? Our Teacher Edition on Quicksand can help.

Welcome to the LitCharts study guide on Nella Larsen's Quicksand. Created by the original team behind SparkNotes, LitCharts are the world's best literature guides.

A concise biography of Nella Larsen plus historical and literary context for Quicksand.

A quick-reference summary: Quicksand on a single page.

In-depth summary and analysis of every chapter of Quicksand. Visual theme-tracking, too.

Explanations of Quicksand's symbols, and tracking of where they appear.

An interactive data visualization of Quicksand's plot and themes.

Nella Larsen was born in a poor neighborhood of Chicago, to a mixed-race father from the Danish West Indies and a white mother from Denmark. Nella’s father deserted the family when Nella was very young, and is believed to have died soon after. Nella’s mother remarried Peter Larsen, another Danish immigrant, and attempted to move to a more prosperous neighborhood of Chicago, but the family was targeted because of Nella’s race and returned to the original neighborhood of her birth. Larsen’s childhood was split between Denmark and the U.S. In the U.S. she attended Fisk College, a historically black university, but did not graduate. Larsen then enrolled in nursing school in New York in 1914, and went on to work in Alabama, and then New York. She married a physician named Elmer Imes, and the pair moved to Harlem in the 1920s, where Larsen began to work as a librarian and pursue writing. She became entrenched in the literary scene in Harlem’s bourgeoning African American culture. Larsen published a number of short stories and two novels in the 1920s. The first of these, Quicksand (1928), was modeled closely on her own life experiences, and received high critical acclaim. In 1933, Larsen and Imes divorced, and Larsen returned to her nursing career before receding from Harlem’s literary circles and moving to the Lower East Side. She died at the age of 72 in her apartment in Brooklyn. Larsen’s mixed-race heritage and life experiences had a profound influence on her novels, which focus on mixed-race characters attempting to figure out their place in the world. Larsen is best known for her novels Quicksand and Passing, which are both semi-autobiographical, and feature raw, emotive explorations of complex race and gender issues. Larsen is touted as the premier novelist of the Harlem Renaissance literary movement, and both of her novels have been taken up in academic settings as canonical explorations of race and gender in early 20th-century American life.
Get the entire Quicksand LitChart as a printable PDF.
"My students can't get enough of your charts and their results have gone through the roof." -Graham S.
Download 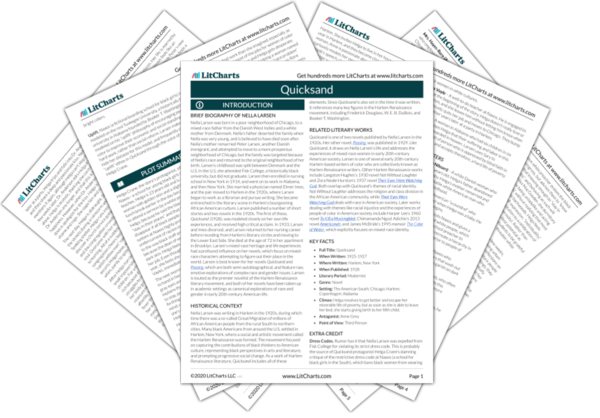 Nella Larsen was writing in Harlem in the 1920s, during which time there was a so-called Great Migration of millions of African American people from the rural South to northern cities. Many black Americans from around the U.S. settled in Harlem, New York, where a social and artistic movement called the Harlem Renaissance was formed. The movement focused on capturing the contributions of black thinkers to American culture, representing black perspectives in arts and literature, and prompting progressive social change. As a work of Harlem Renaissance literature, Quicksand includes all of these elements. Since Quicksand is also set in the time it was written, it references many key figures in the Harlem Renaissance movement, including Frederick Douglass, W. E. B. DuBois, and Booker T. Washington.

Other Books Related to Quicksand

Quicksand is one of two novels published by Nella Larsen in the 1920s. Her other novel, Passing, was published in 1929. Like Quicksand, it draws on Nella Larsen’s life and addresses the experiences of mixed-race women in early 20th-century American society. Larsen is one of several early 20th-century Harlem-based writers of color who are collectively known as Harlem Renaissance writers. Other Harlem Renaissance works include Langston Hughes’s 1930 novel Not Without Laughter and Zora Neale Hurston’s 1937 novel Their Eyes Were Watching God. Both overlap with Quicksand’s themes of racial identity. Not Without Laughter addresses the religion and class division in the African American community, while Their Eyes Were Watching God deals with race in American society. Later works dealing with themes like racial injustice and the experiences of people of color in American society include Harper Lee’s 1960 novel To Kill a Mockingbird, Chimamanda Ngozi Adichie’s 2013 novel Americanah, and James McBride’s 1995 memoir The Color of Water, which explicitly focuses on mixed-race identity.
Key Facts about Quicksand

Dress Codes. Rumor has it that Nella Larsen was expelled from Fisk College for violating its strict dress code. This is probably the source of Quicksand protagonist Helga Crane’s damning critique of the restrictive dress code at Naxos (a school for black girls in the South), which bans black women from wearing bright colors.

Uplift. Naxos (a fictional boarding school for black girls) is modeled on the real Tuskegee University, a historically black university in Alabama founded by Booker T. Washington and modeled on his “uplift” philosophy of encouraging people of color to improve their economic and social standing through hard work, rather than social reform. Larsen makes no effort to hide her distaste for this model, and frequently criticizes the “uplift” ethos in Quicksand through the voice of protagonist Helga Crane. 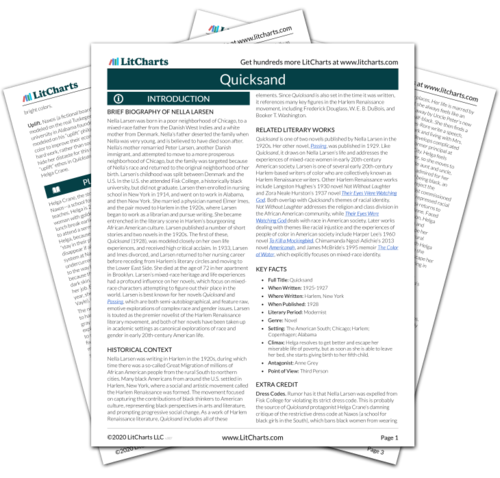 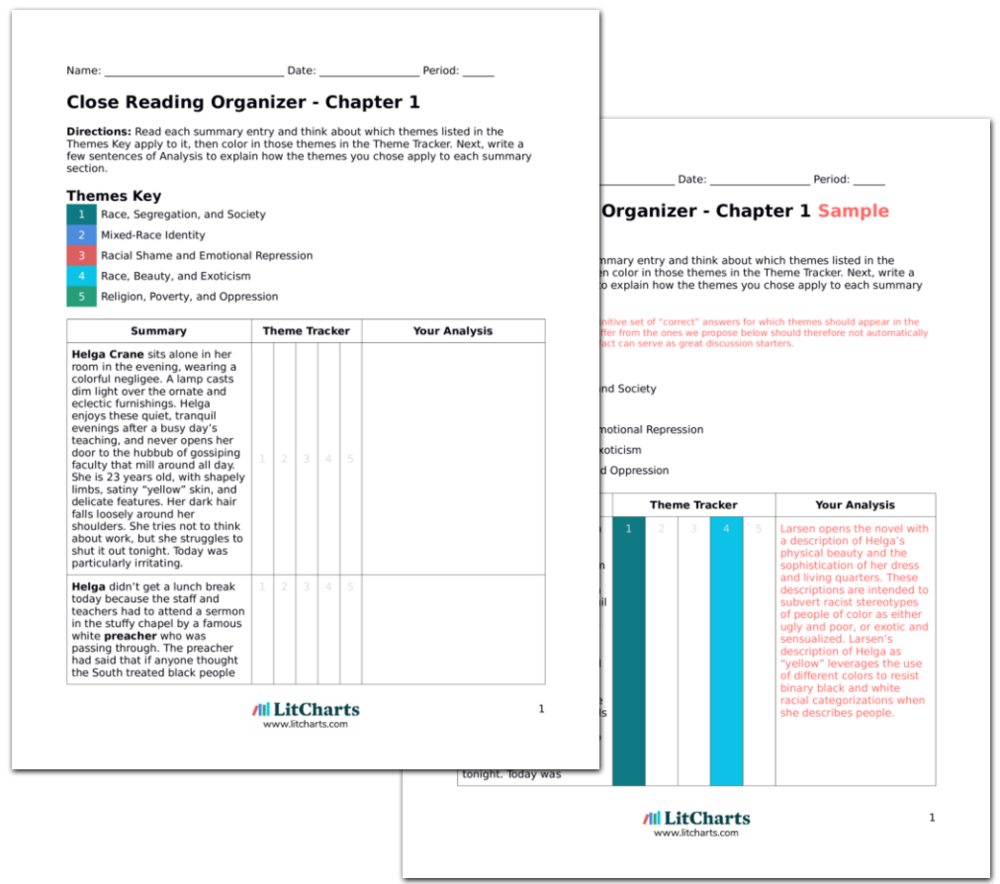