Download this LitChart! (PDF)
Teachers and parents! Struggling with distance learning? Our Teacher Edition on Rising Out of Hatred can help.

Welcome to the LitCharts study guide on Eli Saslow's Rising Out of Hatred. Created by the original team behind SparkNotes, LitCharts are the world's best literature guides.

Rising Out of Hatred: Introduction

A concise biography of Eli Saslow plus historical and literary context for Rising Out of Hatred.

Rising Out of Hatred: Plot Summary

A quick-reference summary: Rising Out of Hatred on a single page.

In-depth summary and analysis of every chapter of Rising Out of Hatred. Visual theme-tracking, too.

Rising Out of Hatred: Themes

Explanations, analysis, and visualizations of Rising Out of Hatred's themes.

Rising Out of Hatred: Quotes

Rising Out of Hatred's important quotes, sortable by theme, character, or chapter.

Rising Out of Hatred: Characters

Description, analysis, and timelines for Rising Out of Hatred's characters.

Description, analysis, and timelines for Rising Out of Hatred's terms.

Rising Out of Hatred: Symbols

Explanations of Rising Out of Hatred's symbols, and tracking of where they appear.

Rising Out of Hatred: Theme Wheel

An interactive data visualization of Rising Out of Hatred's plot and themes.

Eli Saslow grew up in a Jewish family in Denver, Colorado and attended Heritage High School in Littleton, Colorado. He then attended Syracuse University, graduating in 2004. He is currently a journalist who has written for The Washington Post and ESPN The Magazine. He won the 2014 Pulitzer Prize for Explanatory Reporting for his reporting on food stamps, which was collected into a book called American Hunger. Saslow was also a finalist for the Pulitzer in 2013, 2016, and 2017. Four of his stories have been published in the anthology Best American Sports Writing. He is the author of Ten Letters: The Stories Americans Tell Their President and Rising Out of Hatred: The Awakening of a Former White Nationalist. Saslow lives with his wife and three children in Portland, Oregon.
Get the entire Rising Out of Hatred LitChart as a printable PDF.
"My students can't get enough of your charts and their results have gone through the roof." -Graham S.
Download 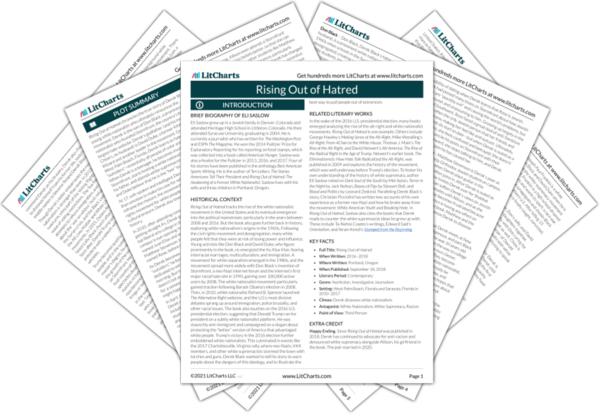 Historical Context of Rising Out of Hatred

Rising Out of Hatred tracks the rise of the white nationalist movement in the United States and its eventual emergence into the political mainstream, particularly in the years between 2008 and 2016. But the book also goes further back in history, exploring white nationalism’s origins in the 1960s. Following the civil rights movement and desegregation, many white people felt that they were at risk of losing power and influence. Young activists like Don Black and David Duke, who figure prominently in the book, re-energized the Ku Klux Klan, fearing interracial marriages, multiculturalism, and immigration. A movement for white separatism emerged in the 1980s, and the movement spread more widely with Don Black’s invention of Stormfront, a neo-Nazi internet forum and the internet’s first major racial hate site in 1990, gaining over 100,000 active users by 2008. The white nationalist movement particularly gained traction following Barack Obama’s election in 2008. Then, in 2010, white nationalist Richard B. Spencer launched The Alternative Right webzine, and the U.S.’s most divisive debates sprang up around immigration, police brutality, and other racial issues. The book also touches on the 2016 U.S. presidential election, suggesting that Donald Trump ran for president on a subtly white nationalist platform. He was staunchly anti-immigrant and campaigned on a slogan about protecting the “better” version of America that advantaged white people. Trump’s victory in the 2016 election further emboldened white nationalists. This culminated in events like the 2017 Charlottesville, Virginia rally, where neo-Nazis, KKK members, and other white supremacists stormed the town with torches and guns. Derek Black wanted to tell his story to warn people about the dangers of this ideology, and to illustrate the best way to pull people out of extremism.

Other Books Related to Rising Out of Hatred

In the wake of the 2016 U.S. presidential election, many books emerged analyzing the rise of the alt-right and white nationalist movements. Rising Out of Hatred is one example. Others include George Hawley’s Making Sense of the Alt-Right, Mike Wendling’s Alt-Right: From 4Chan to the White House, Thomas J. Main’s The Rise of the Alt-Right, and David Neiwert’s Alt-America: The Rise of the Radical Right in the Age of Trump. Neiwert’s earlier book, The Eliminationists: How Hate Talk Radicalized the Alt-Right, was published in 2009 and explores the history of the movement, which was well underway before Trump’s election. To foster his own understanding of the history of white supremacy, author Eli Saslow relied on Dark Soul of the South by Mel Ayton, Terror in the Night by Jack Nelson, Bayou of Pigs by Stewart Bell, and Blood and Politics by Leonard Zeskind. Paralleling Derek Black’s story, Christian Picciolini has written two accounts of his own experience as a former neo-Nazi and how he broke away from the movement: White American Youth and Breaking Hate. In Rising Out of Hatred, Saslow also cites the books that Derek reads to counter the white supremacist ideas he grew up with. These include Ta-Nehisi Coates’s writings, Edward Said’s Orientalism, and Ibram Kendi’s Stamped from the Beginning.
Key Facts about Rising Out of Hatred

Extra Credit for Rising Out of Hatred

Happy Ending. Since Rising Out of Hatred was published in 2018, Derek has continued to advocate for anti-racism and denounced white supremacy alongside Allison, his girlfriend in the book. The pair married in 2020. 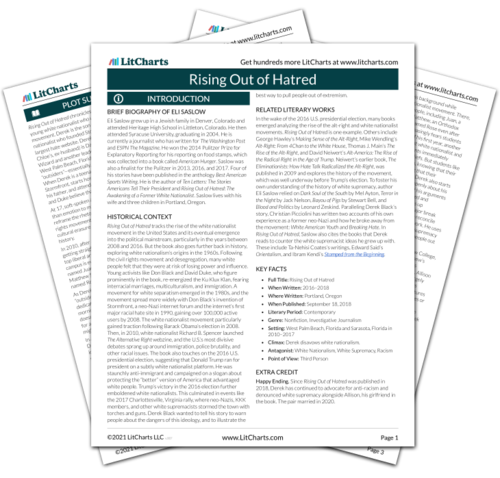 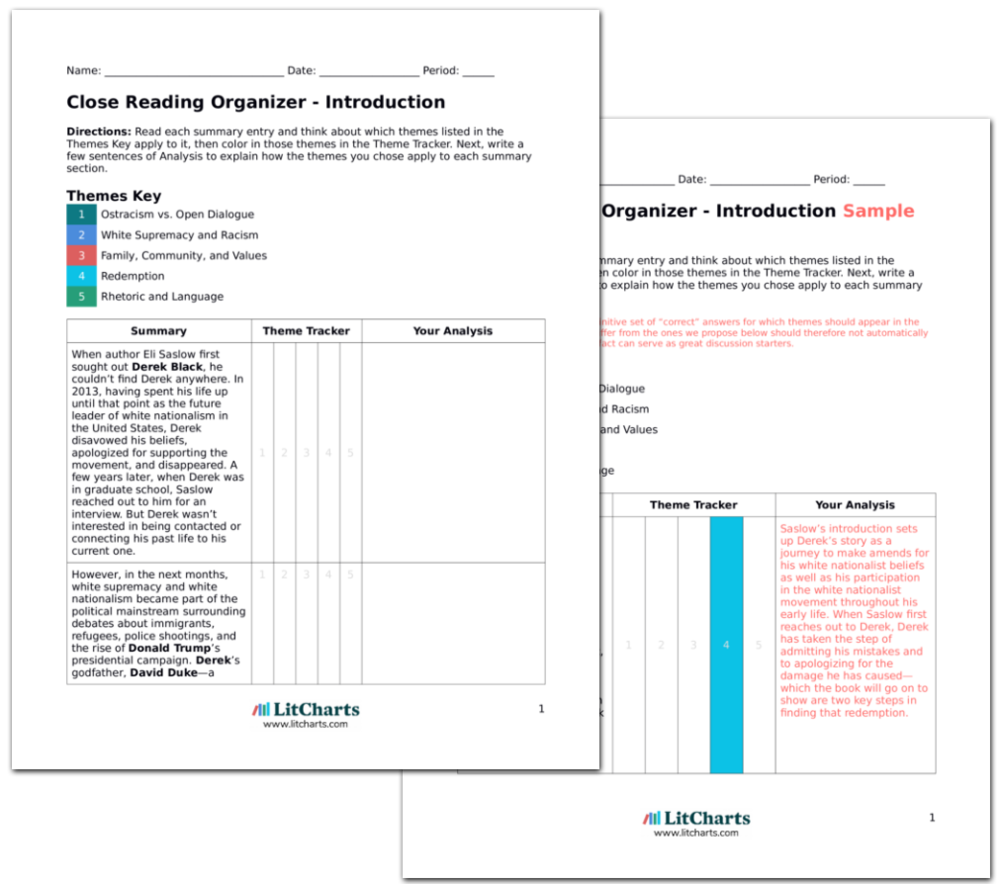