Download this LitChart! (PDF)
Teachers and parents! Struggling with distance learning? Our Teacher Edition on Room can help.

Welcome to the LitCharts study guide on Emma Donoghue's Room. Created by the original team behind SparkNotes, LitCharts are the world's best literature guides.

A concise biography of Emma Donoghue plus historical and literary context for Room.

A quick-reference summary: Room on a single page.

In-depth summary and analysis of every chapter of Room. Visual theme-tracking, too.

Explanations of Room's symbols, and tracking of where they appear.

An interactive data visualization of Room's plot and themes.

Born in 1969 in Ireland to esteemed literary critic Denis Donoghue and his wife Frances, Emma Donoghue grew up in Dublin and earned degrees in English literature from University College Dublin and the University of Cambridge. In 1998, Donoghue and her partner Christine Roulson relocated to Roulson’s home country of Canada, where they have lived ever since. Donoghue’s novels, including Stir Fry, Hood, Slammerkin, and 2010’s worldwide smash Room, are largely about the lives and concerns of women throughout history and often focus on lesbian themes. Room, her most successful work to date, was shortlisted for the 2010 Man Booker Prize and the Orange Prize for Fiction, and was later adapted into a 2015 film starring Brie Larson. The film version of Room garnered commercial and critical attention for Larson, and she won an Academy Award for the role. Donoghue wrote the screenplay, adapting it from her own novel, and was nominated for her work at the Academy Awards, the Golden Globes, and the BAFTAs. Donoghue is also the author of numerous short stories, plays, and critical essays, and she holds dual Irish and Canadian citizenship.
Get the entire Room LitChart as a printable PDF.
"My students can't get enough of your charts and their results have gone through the roof." -Graham S.
Download 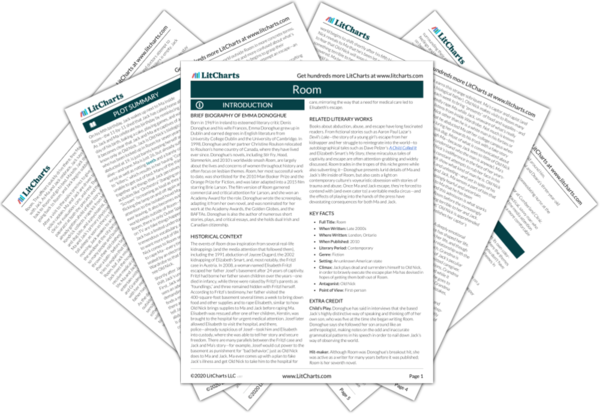 The events of Room draw inspiration from several real-life kidnappings (and the media attention that followed them), including the 1991 abduction of Jaycee Dugard, the 2002 kidnapping of Elizabeth Smart, and, most notably, the Fritzl case in Austria. In 2008, a woman named Elisabeth Fritzl escaped her father Josef’s basement after 24 years of captivity. Fritzl had borne her father seven children over the years—one died in infancy, while three were raised by Fritzl’s parents as “foundlings,” and three remained hidden with Fritzl herself. According to Fritzl’s testimony, her father visited the 400-square-foot basement several times a week to bring down food and other supplies and to rape Elisabeth, similar to how Old Nick brings supplies to Ma and Jack before raping Ma. Elisabeth was rescued after one of her children, Kerstin, was brought to the hospital for urgent medical attention. Josef later allowed Elisabeth to visit the hospital, and there, police—already suspicious of Josef—took him and Elisabeth into custody, where she was able to tell her story and secure freedom. There are many parallels between the Fritzl case and Jack and Ma’s story—for example, Josef would cut power to the basement as punishment for “bad behavior,” just as Old Nick does to Ma and Jack. Ma even comes up with a plan to fake Jack’s illness and get Old Nick to take him to the hospital for care, mirroring the way that a need for medical care led to Elisabeth’s escape.

Other Books Related to Room

Books about abduction, abuse, and escape have long fascinated readers. From fictional stories such as Aaron Paul Lazar’s Devil’s Lake—the story of a young girl’s escape from her kidnapper and her struggle to reintegrate into the world—to autobiographical tales such as Dave Pelzer’s A Child Called It and Elizabeth Smart’s My Story, these miraculous tales of captivity and escape are often attention-grabbing and widely discussed. Room trades in the tropes of this niche genre while also subverting it—Donoghue presents lurid details of Ma and Jack’s life inside of Room, but also casts a light on contemporary culture’s voyeuristic obsession with stories of trauma and abuse. Once Ma and Jack escape, they’re forced to contend with (and even cater to) a veritable media circus—and the effects of playing into the hands of the press have devastating consequences for both Ma and Jack.
Key Facts about Room

Child’s Play. Donoghue has said in interviews that she based Jack’s highly distinctive way of speaking and thinking off of her own son, who was five at the time she began writing Room. Donoghue says she followed her son around like an anthropologist, making notes on the odd and inaccurate grammatical patterns in his speech in order to nail down Jack’s way of observing the world.

Hit-maker. Although Room was Donoghue’s breakout hit, she was active as a writer for many years before it was published; Room is her seventh novel. 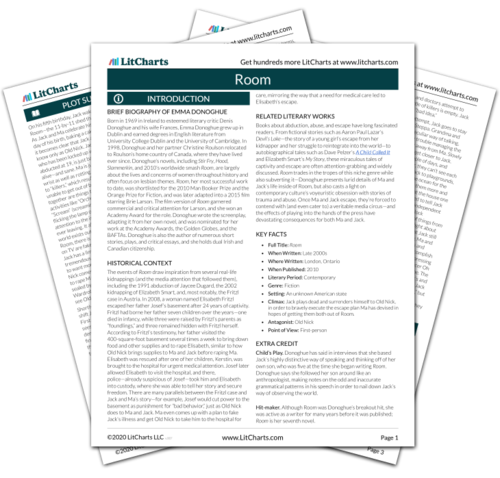 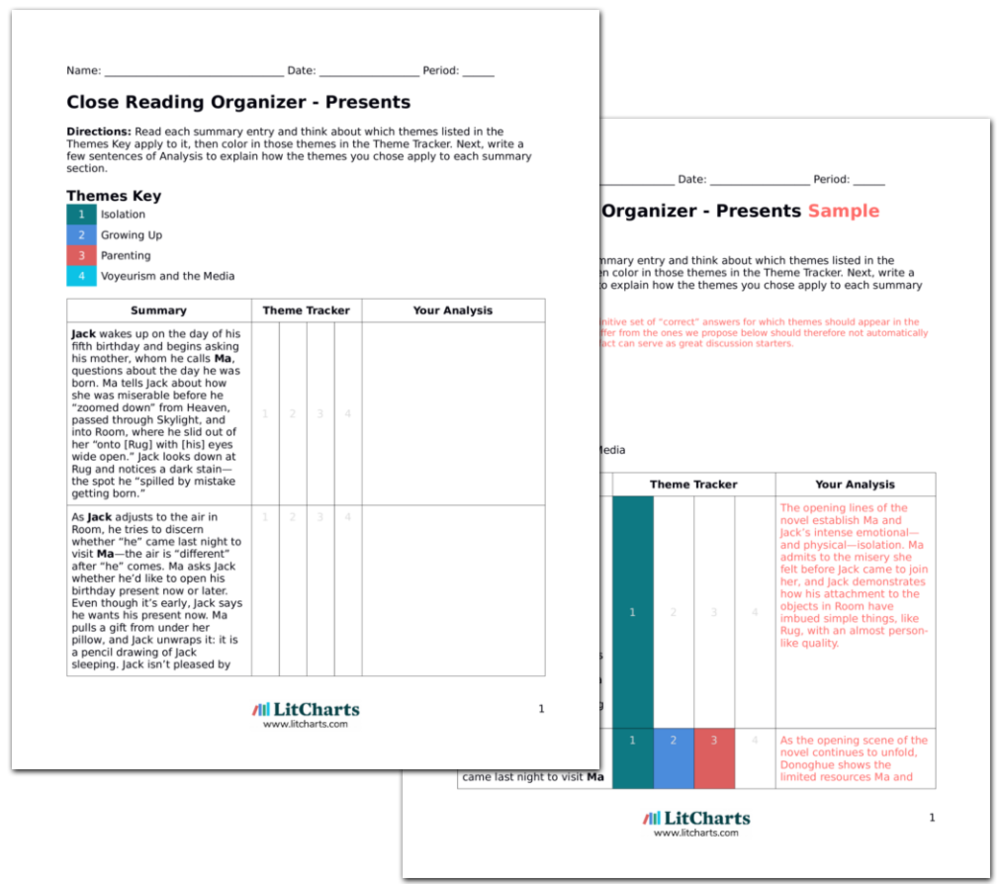