Ann Nash and Natalie Keene, the two little girls whose murders set the events of the novel in motion, are both found—months apart and in separate places—with all of their teeth pulled from their mouth. The violent and deliberate nature of the extractions, which would have required an enormous amount of force and dedication points (at least in the eyes of the investigators) to a large and disturbed suspect—a man, presumably, who wanted to defile and deform his victims in a grotesque way. Once the truth about the murders comes out, at the very end of the novel—after Adora has already been arrested for the crimes, when the truth about her Munchausen by Proxy murder of her daughter Marian is revealed and a pair of dainty pliers is found in her house—it comes to light that Adora’s thirteen-year-old daughter (and Camille’s own half-sister) Amma was actually the one responsible for the deaths of Natalie and Ann, as well as the violent tooth extractions. Amma, who has for a long while been obsessed with perfectly matching the details of her four-foot-tall dollhouse to the specifications of her mother’s own home, needed the girls’ teeth to detail the ivory floors of her mother’s bedroom. When Ann and Natalie, both of whom her mother had been tutoring and paying extra attention to, got on Amma’s nerves, she killed them and plucked their teeth from their dead mouths, all in service of her own project.

The teeth, then, symbolize an overturning of femininity and the stereotypes of girlhood and womanhood. Because of the physical strength and emotional detachment officials decide must have been necessary for the murderer to remove the teeth, they focus only on male suspects, even throwing Natalie’s innocent brother John Keene into the mix. The detectives and policemen fail to believe that a woman could have been responsible for these crimes—let alone an “innocent” thirteen-year-old girl. Amma has proven herself to Camille to be a complicated figure whose femininity and innocence is largely a construct well before the shocking twist is revealed—Amma takes hard drugs, has sex with boys (and forces her friends to do the same), and dresses up like a little “doll” for Adora while putting on saucy outfits to go out on the town at night. Amma is both vulnerable to Adora’s ministrations and is complicit in them—even when her mother feeds her poisons that she knows will make her sick, Amma welcomes the concoctions, knowing that the bond between her and Adora will grow stronger the more readily she submits to her mother’s care. The teeth that Amma pulls from the mouths of her murder victims and then uses to decorate the floor of her dollhouse—a decidedly feminine and little-girlish project—are the most tangible symbol both of Amma’s rage and of her destruction of the expectations people have of women and little girls more specifically.

The Sharp Objects quotes below all refer to the symbol of Teeth. For each quote, you can also see the other characters and themes related to it (each theme is indicated by its own dot and icon, like this one:

). Note: all page numbers and citation info for the quotes below refer to the Random House edition of Sharp Objects published in 2006.
Chapter 10 Quotes

"[Natalie] had serious problems. We looked for my earlobe, see if it could be stitched back on, but it was gone. I guess she swallowed it.” [Meredith] gave a laugh that sounded like the reverse of a gulp of air. ”I mostly just felt sorry for her.”

“Worse. There are people all over this town with her teeth marks in them. Your mother included.”

“What?” My hands began to sweat and the back of my neck went cold.

“Your mom was tutoring her and Ann didn’t understand. She completely lost it, pulled some of your momma’s hair out, and bit into her wrist. Hard. I think there had to be stitches.” Images of my mother’s thin arm caught between tiny teeth, Ann shaking her head like a dog, blood blossoming on my mother’s sleeve, on Ann’s lips. A scream, a release.

A little circle of jagged lines, and within, a ring of perfect skin.

“I was friends with them for a while,” she said finally, talking into her chest. “We had fun, running around in the woods. We were wild. We’d hurt things together. We killed a cat once. But then she”—as always Adora’s name went unsaid—“got all interested in them. I could never have anything to myself. They weren't my secrets anymore. They were always coming by the house. They started asking me questions about being sick. They were going to ruin everything. She didn't even realize it.” Amma rubbed her shorn hair harshly. “And why did Ann have to bite . . . her? I couldn’t stop thinking about it. Why Ann could bite her, and I couldn’t.”

She refused to say more, answered only in sighs and coughs. As for the teeth, she took the teeth only because she needed them. The dollhouse had to be perfect, just like everything else Amma loved.

I think there is more. Ann and Natalie died because Adora paid attention to them. Amma could only view it as a raw deal. Amma, who had allowed my mother to sicken her for so long.

Sometimes when you let people do things to you, you ’re really doing it to them. Amma controlled Adora by letting Adora sicken her. In return, she demanded uncontested love and loyalty. No other little girls allowed. For the same reasons she murdered Lily Burke. Because, Amina suspected, I liked her better.

You can come up with four thousand other guesses, of course, about why Amina did it. In the end, the fact remains: Amma enjoyed hurting. I like violence, she’d shrieked at me. I blame my mother. A child weaned on poison considers harm a comfort. 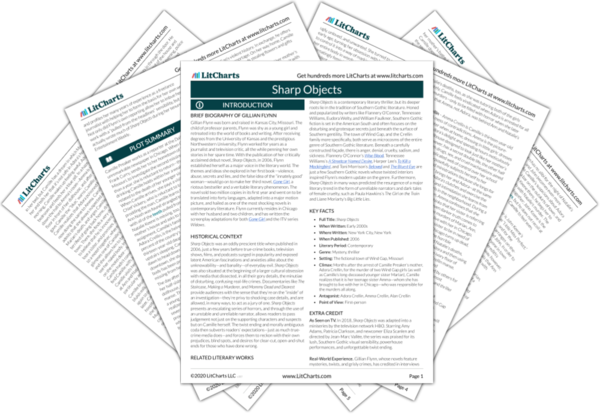 The timeline below shows where the symbol Teeth appears in Sharp Objects. The colored dots and icons indicate which themes are associated with that appearance.

...he believes that, the man reveals that the killer—whomever he was—pulled out all of Ann’s teeth. (full context)

...is the only “blessing” he and his family have. Ann was found strangled, with her teeth pulled, but without any other cuts, bruises, or scrapes. Bob says he’d rather Ann be... (full context)

...aimed at the sidewalk. It is Natalie Keene, and she is missing all of her teeth. (full context)

...the macabre intoning of “a tooth for a tooth” when Natalie had all of her teeth pried from her mouth. Outside the church, after the service, Camille sees the blonde girls... (full context)

...women in Wind Gap might be connected to the attacks. Richard sees the act of teeth-pulling as tantamount to rape—at least in the eyes of the murderer. When Camille asks if... (full context)

...Amma, having overheard, agrees that he should—before any more little girls show up without their teeth. Amma slips into the pool, and John walks away into the carriage house. When Amma... (full context)

...decides to pony up and tell the truth: she thinks she knows why the girls’ teeth were pulled. (full context)

...and Natalie were violent biters. She tells Richard that she believes this is why their teeth were taken. Richard asks Camille to tell him who the girls bit, but she insists... (full context)

...assuring her that she is a decent person. Camille feels the words “wrong, woman, [and] teeth” burning against her skin. Curry continues talking to her, telling her jokes and stories, and... (full context)

...on her. Camille falls asleep and dreams that Adora is on top of her, spitting teeth into her hands. (full context)

...he plans on obtaining a warrant to search Adora’s house—he believes she’ll have kept the teeth. Richard begs Camille to go home and have a “regular evening,” but Camille reveals that... (full context)

...DNA tests match the trace blood on the tool to both Ann and Natalie. The teeth, however, are not found anywhere in the house, and though Camille begs the police to... (full context)

...a Dumpster” three blocks from Camille’s apartment just a few hours later. Six of her teeth have been pulled. Hearing the news, Camille immediately calls the Wind Gap police department to... (full context)

...the dollhouse, Camille and Amma both scream: the ivory floor is made out of human teeth. (full context)

...on the hip as Amma strangled her. It took Amma an hour to pull the teeth, after which the girls dumped Ann’s body in the water, went back to Kelsey’s house,... (full context)

...feeding her in shifts. Again, when the time came, Amma strangled Natalie and pulled her teeth. At four in the morning, the girls drove Natalie’s body in their golf cart to... (full context)

...in killing Lily, Camille notes. Amma stunned Lily with a rock, strangled her, plucked her teeth, and cut her hair, then braided the strands into a rug for Camille’s room in... (full context) 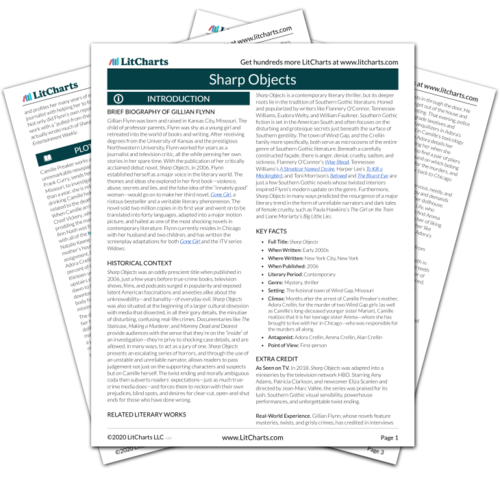 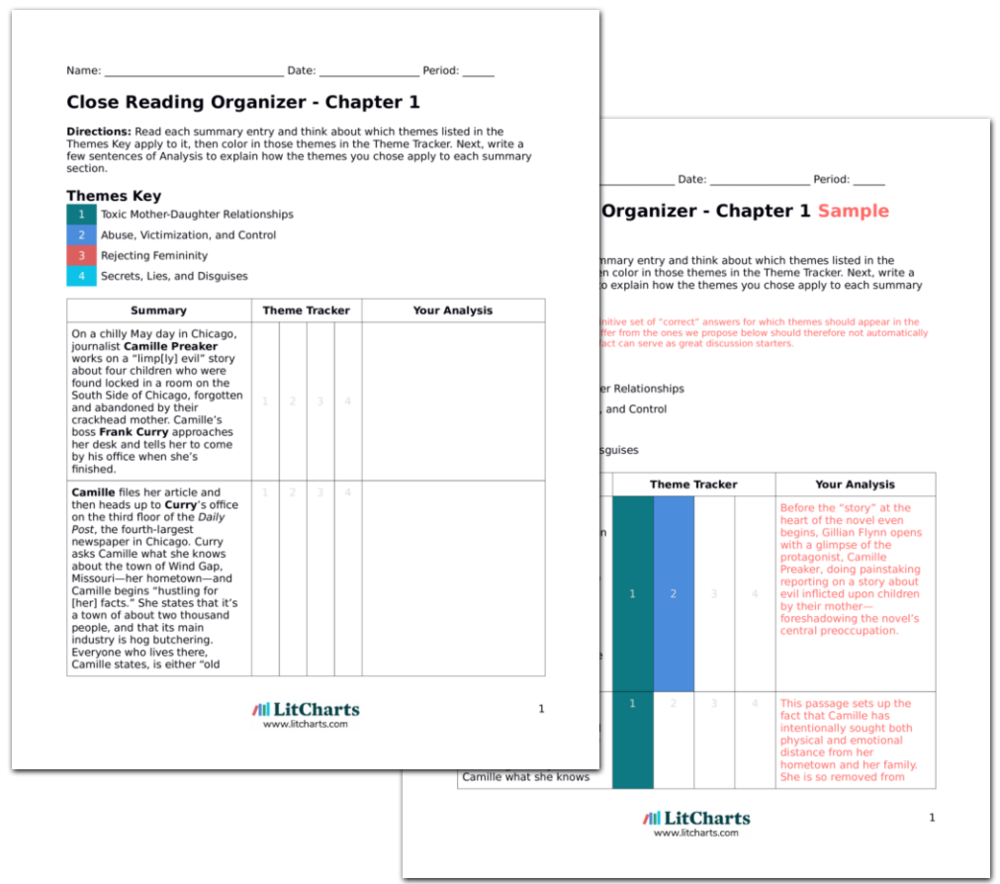