Download this LitChart! (PDF)
Teachers and parents! Struggling with distance learning? Our Teacher Edition on Such a Fun Age can help.

Welcome to the LitCharts study guide on Kiley Reid's Such a Fun Age. Created by the original team behind SparkNotes, LitCharts are the world's best literature guides.

Such a Fun Age: Introduction

A concise biography of Kiley Reid plus historical and literary context for Such a Fun Age.

Such a Fun Age: Plot Summary

A quick-reference summary: Such a Fun Age on a single page.

In-depth summary and analysis of every chapter of Such a Fun Age. Visual theme-tracking, too.

Such a Fun Age: Themes

Explanations, analysis, and visualizations of Such a Fun Age's themes.

Such a Fun Age: Quotes

Such a Fun Age's important quotes, sortable by theme, character, or chapter.

Such a Fun Age: Characters

Description, analysis, and timelines for Such a Fun Age's characters.

Such a Fun Age: Symbols

Explanations of Such a Fun Age's symbols, and tracking of where they appear.

Such a Fun Age: Theme Wheel

An interactive data visualization of Such a Fun Age's plot and themes.

Kiley Reid was born in Los Angeles, California, in 1987 and spent most of her childhood in Tucson, Arizona. She studied acting at Marymount Manhattan College. Reid worked numerous jobs to support herself through college, including nannying and babysitting for wealthy Manhattan families—experiences she undoubtedly drew from years later, when she began writing Such a Fun Age. Reid eventually earned a graduate degree from the Iowa Writers’ Workshop. Her short stories have been published in Ploughshares, December, and New South, among other literary journals. She began to write her first novel, Such a Fun Age, as she applied to graduate school. The novel was published in 2019 and received high praise from critics; in addition to being longlisted for the Booker Prize in 2020, it won the International Book of the year at the 2021 Australian Book Industry Awards. Reid is currently at work on a screenplay for the film adaptation of Such a Fun Age. She currently lives in Philadelphia with her husband.
Get the entire Such a Fun Age LitChart as a printable PDF.
"My students can't get enough of your charts and their results have gone through the roof." -Graham S.
Download 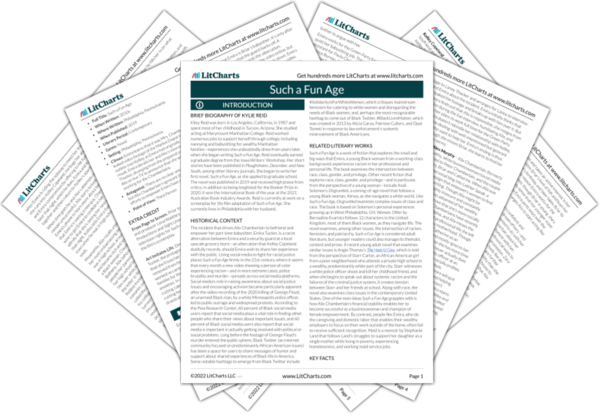 Historical Context of Such a Fun Age

The incident that drives Alix Chamberlain to befriend and empower her part-time babysitter, Emira Tucker, is a racist altercation between Emira and a security guard at a local upscale grocery store—an altercation that Kelley Copeland dutifully records, should Emira wish to share her experience with the public. Using social media to fight for racial justice places Such a Fun Age firmly in the 21st century, where it seems that every month a new video showing a person of color experiencing racism—and in more extreme cases, police brutality and murder—spreads across social media platforms. Social media’s role in raising awareness about social justice issues and encouraging activism became particularly apparent after the video recording of the 2020 killing of George Floyd, an unarmed Black man, by a white Minneapolis police officer, led to public outrage and widespread protests. According to the Pew Research Center, 60 percent of Black social media users report that social media plays a vital role in finding other people who share their views about important issues, and 60 percent of Black social media users also report that social media is important in actually getting involved with political or social problems. Long before the footage of George Floyd’s murder entered the public sphere, Black Twitter (an internet community focused on predominantly African American issues) has been a space for users to share messages of humor and support about shared experiences of Black life in America. Some notable hashtags to emerge from Black Twitter include #SolidarityIsForWhiteWomen, which critiques mainstream feminism for catering to white women and disregarding the needs of Black women; and, perhaps the most recognizable hashtag to come out of Black Twitter, #BlackLivesMatter, which was created in 2013 by Alicia Garza, Patrisse Cullors, and Opal Tometi in response to law enforcement’s systemic mistreatment of Black Americans.

Other Books Related to Such a Fun Age

Such a Fun Age is a work of fiction that explores the small and big ways that Emira, a young Black woman from a working-class background, experiences racism in her professional and personal life. The book examines the intersection between race, class, gender, and privilege. Other recent fiction that explores race, class, gender, and privilege—and in particular, from the perspective of a young woman—include Asali Solomon’s Disgruntled, a coming-of-age novel that follows a young Black woman, Kenya, as she navigates a white world. Like Such a Fun Age, Disgruntled examines complex issues of class and race. The book is based on Solomon’s personal experiences growing up in West Philadelphia. Girl, Woman, Other by Bernadine Evaristo follows 12 characters in the United Kingdom, most of them Black women, as they navigate life. The novel examines, among other issues, the intersection of racism, feminism, and patriarchy. Such a Fun Age is considered adult literature, but younger readers could also manage its thematic content and prose. A recent young adult novel that examines similar issues is Angie Thomas’s The Hate U Give, which is told from the perspective of Starr Carter, an African American girl from a poor neighborhood who attends a private high school in a wealthy, predominantly white part of the city. Starr witnesses a white police officer shoot and kill her childhood friend, and when she begins to speak out about systemic racism and the failures of the criminal justice system, it creates tension between Starr and her friends at school. Along with race, the novel also examines class issues in the contemporary United States. One of the main ideas Such a Fun Age grapples with is how Alix Chamberlain’s financial stability enables her to become successful as a businesswoman and champion of female empowerment. By contrast, people like Emira, who do the caregiving and domestic labor that enables their wealthy employers to focus on their work outside of the home, often fail to receive sufficient recognition. Maid is a memoir by Stephanie Land that follows Land’s struggles to support her daughter as a single mother while living in poverty, experiencing homelessness, and working maid service jobs.
Key Facts about Such a Fun Age

Extra Credit for Such a Fun Age

From Page to Screen. Prior to its publication in 2019, actress and producer Lena Waithe’s production company Hillman Grad Productions and Sight Unseen pictures acquired the film and television rights for Such a Fun Age. Reid is currently working on the film’s screenplay.

Art Imitates Life. One of the recurring anxieties of Emira Tucker, the protagonist of Such a Fun Age, is the looming reality that she’ll lose her health insurance once she turns 26 and is removed from her parents’ health insurance policy. Reid, who worked as caregiver for the children of wealthy Manhattan families for the better part of a decade, struggled with similar anxieties. In an interview, she recalls being hypervigilant about cutting cakes at children’s birthday parties, since accidentally cutting herself could set her back thousands of dollars and drastically undermine her financial security. 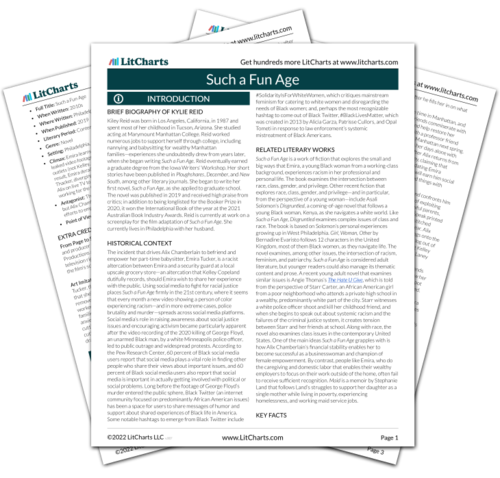 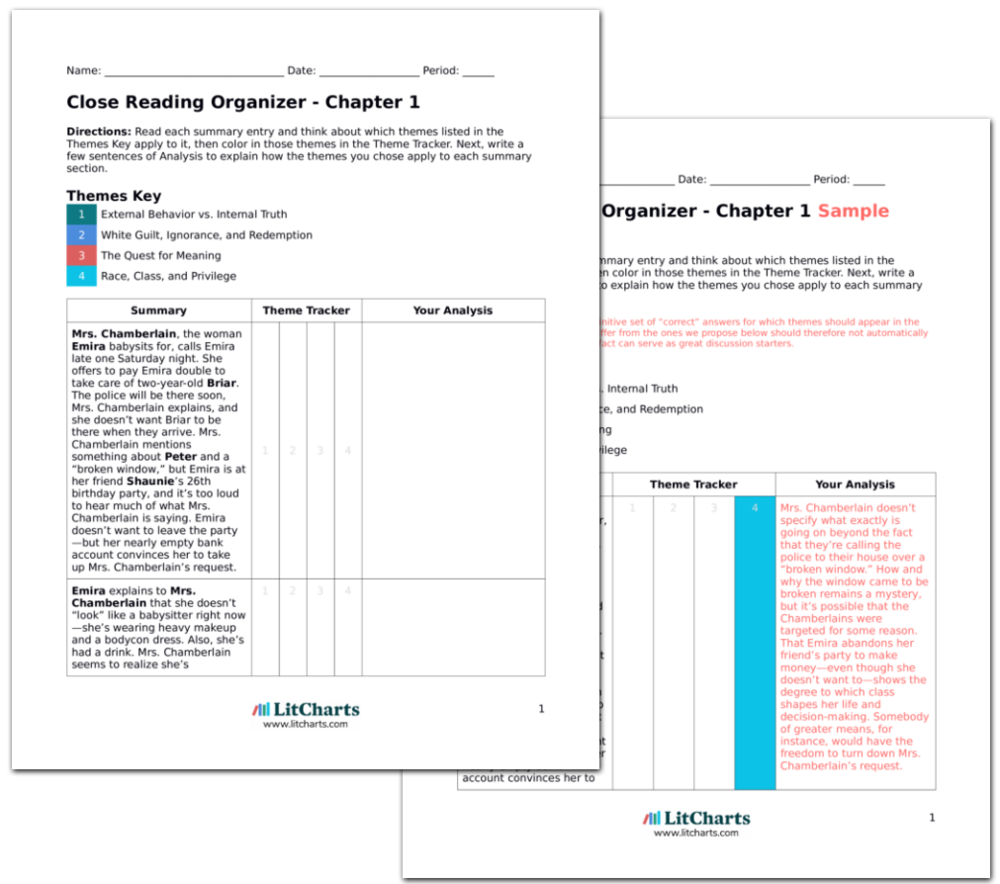