Get LitCharts A+
Bubba is a twenty-two-year-old young woman who lives next door to Emma. She's been joining in on the layoff season festivities since she was a small child and views Barney and Roo as uncles. When she was fifteen she, Nancy, and Olive forced Barney and Roo to accept that Bubba wasn't a child anymore, but though they started bringing her adult gifts like perfume, they never fully accepted that she's an adult. She views the layoff season as a magical time and desperately wants to recreate the magic for herself. Bubba sees her opportunity to do so when Barney introduces her to Johnnie Dowd, a young man he and Roo worked with up north. Johnnie asks Bubba for her real name (Kathie) and remarks that Barney, Roo, and Olive haven't accepted the fact that Bubba is an adult. Despite her admiration for Johnnie, Bubba is hurt and defensive when Johnnie refuses to see the magic of the layoff season that she's seen for the past sixteen years, and is very slow to warm to Pearl for the same reasons. However, she agrees with Barney when he suggests that she's outgrown the layoffs of the past, and it's implied that she goes out to create her own layoff season magic with Johnnie.

Bubba Ryan Quotes in Summer of the Seventeenth Doll

The Summer of the Seventeenth Doll quotes below are all either spoken by Bubba Ryan or refer to Bubba Ryan. For each quote, you can also see the other characters and themes related to it (each theme is indicated by its own dot and icon, like this one:

It's going to be just the same, isn't it? I mean, you'll still be going to Selby at Christmas time, and—and all the rest. You won't alter anything?

Unlock with LitCharts A+
Get the entire Summer of the Seventeenth Doll LitChart as a printable PDF.
"My students can't get enough of your charts and their results have gone through the roof." -Graham S.
Download 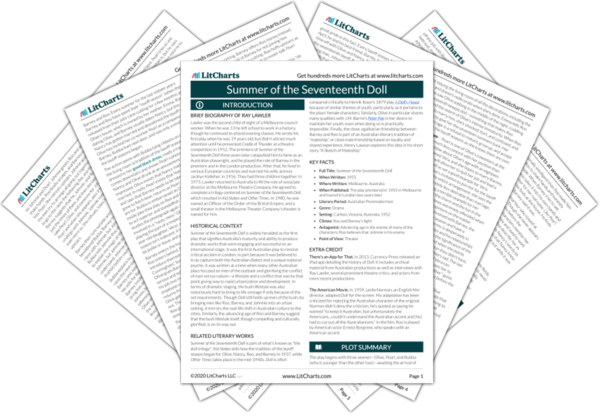 Bubba Ryan Character Timeline in Summer of the Seventeenth Doll

The timeline below shows where the character Bubba Ryan appears in Summer of the Seventeenth Doll. The colored dots and icons indicate which themes are associated with that appearance.

Bubba smiles nervously at Pearl and explains that Olive always gets nervous, and that she and... (full context)

...swishes into the room in a pretty green and white dress and asks Pearl and Bubba what they think. Eager for a new topic of conversation, Bubba hastily compliments Olive's look.... (full context)

Olive says fondly that Bubba is a good kid, and Pearl says that Bubba isn't as innocent as she seems.... (full context)

Bubba walks in with her arms full of cold beer bottles. Olive helps her set them... (full context)

Bubba seems ashamed, and asks Olive if she can do anything else. When Olive says everything's... (full context)

...introduces Pearl and Roo, and Pearl begins to relax a little. Barney grabs one of Bubba's walking sticks off the mantel and asks where she is before stepping onto the back... (full context)

...asks Roo to keep it quiet, and Roo asks if she's been taking from Olive. Bubba lets herself in, and Emma tells Roo to not ask questions. (full context)

Emma asks Bubba if she's come to help clean up, and Bubba answers that she's just dropping in... (full context)

Bubba insists that she's been out with a bunch of men since she ended things with... (full context)

Bubba appears on the back verandah in an evening dress and calls to Olive. She tells... (full context)

Johnnie impatiently calls for Barney, who comes back into the living room dragging a surprised Bubba with him. Johnnie tries to tell Barney that Pearl is upset, but Barney tells him... (full context)

Johnnie turns to Bubba and awkwardly tells her that if she doesn't want to go to the races, she... (full context)

Johnnie motions to the kewpie dolls and asks what they're for. Bubba explains that Roo gives one to Olive every year, and Johnnie snorts and makes disparaging... (full context)

...to Roo as though Johnnie won't understand it, or can't live up to the standard. Bubba sits and wonders if it's like the walking sticks. When Johnnie looks confused, she begins... (full context)

...plan for tomorrow. Barney is confused for a moment until he follows Johnnie's gaze to Bubba. Roo appears, half shaved, and cursorily says goodbye to Johnnie. At Johnnie's prodding, Roo asks... (full context)

Roo asks Bubba why she's here, and she explains that she met Johnnie. Olive enters, asks if Johnnie's... (full context)

...can argue, but not fight. Roo yells at her to get out, and Olive pulls Bubba away with her. Roo grabs Barney's collar and hauls him inside. Barney asks Roo to... (full context)

...resume his role as ganger. Roo begins lobbing accusations at Barney: of scheming and using Bubba as bait, of chasing after Johnnie, and of trying to get Johnnie to join them... (full context)

...the floor, where it shatters. Olive sinks to the floor and grabs the doll, while Bubba runs out the back door. (full context)

Roo tells Bubba that she's certainly entitled to talk to Johnnie, but deserves to know why she was... (full context)

As he sits, Roo asks Bubba what's so important about going to the races. Bubba says emotionally that Johnnie asked her,... (full context)

When Roo asks if that's true even after last night, Bubba insists that what happened won't happen to her. Softly, Roo says that Bubba has outgrown... (full context) 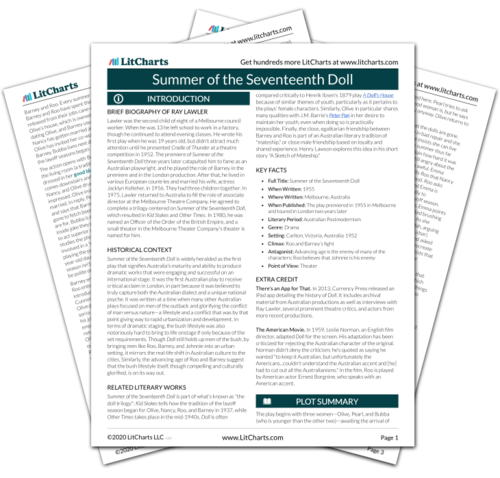 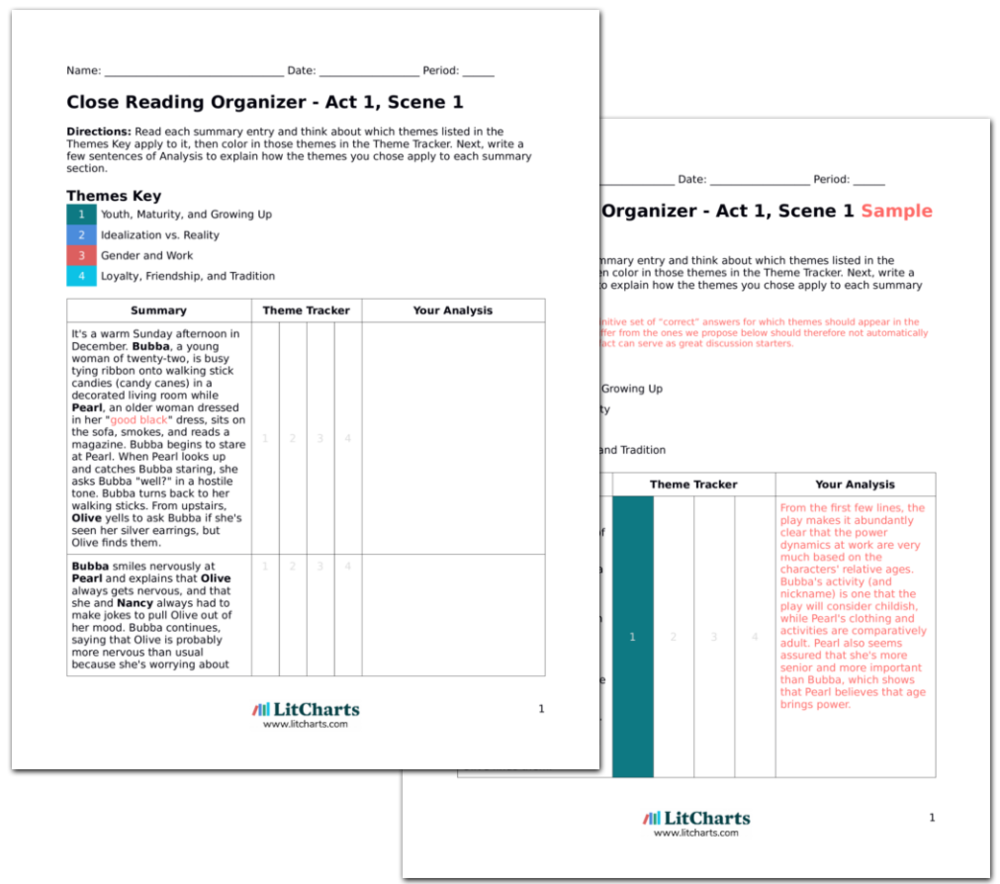