Download this LitChart! (PDF)
Teachers and parents! Struggling with distance learning? Our Teacher Edition on The American Dream can help.

Get LitCharts A+
LitCharts assigns a color and icon to each theme in The American Dream, which you can use to track the themes throughout the work.

Edward Albee’s short play The American Dream, part of the post-World War II “Theatre of the Absurd” movement, is a convoluted and occasionally dreamlike piece that satirically skewers the idea of “the American dream.” A deeply personal play which draws on Albee’s own dissatisfaction with his strained, painful childhood, The American Dream expresses Albee’s desire to expose American idealism as a fallacy. Through the play, Albee argues that “the American dream”—opportunity, equality, success through hard work, and clean-cut familial bliss—doesn’t exist, and never has.

The play’s very title announces its primary concern: the American dream. In the 1960s, when Albee was writing this play, the idea of the American dream signified something very different than it does today. America in the postwar landscape was synonymous with freedom and opportunity; resistance against fascism and oppression; and an upward trajectory in terms of industry and innovation. Cars and homes and educations were affordable; social values were wholesome and family-focused. Societal unrest and revolution, however, were on the horizon all across the globe—and artists like Albee were determined to hold the issues, inequities, and injustices simmering just below the surface up to the light. There are many ways in which Albee skewers the idea of the American dream throughout the play, from the nuclear family who appear happy at first glance but secretly loathe one another, to Mrs. Barker, a robotic, Stepford-wife-esque neighborhood friend. Mommy talks repeatedly and rapturously about the social and economic advancement she experienced when she married Daddy solely for his riches, and though Grandma chides her daughter for such shallowness, Mommy has no qualms about her desire to advance up the socioeconomic ladder without looking back. By skewering Mommy’s open selfishness—and by showing the tradeoff she made between literal financial poverty and moral bankruptcy—Albee suggests that those who pursue “the American dream” as hollowly and recklessly as Mommy does will never be satisfied. The “pursuit of happiness” is revealed to be a cruel, Sisyphean inversion of itself; happiness can never truly be reached in America, a society that only encourages its members to consume more and more.

Albee further indicts the American dream when he introduces the character of The Young Man in the play’s final third. The ruggedly handsome, “midwestern”-looking Young Man shows up at Mommy and Daddy’s apartment without knowing what he’s doing there—but when he starts talking to Grandma, who praises his good looks and dubs him “The American Dream,” the reason for his appearance becomes slightly more clear. The Young Man describes the painful life he’s had so far; separated from an identical twin brother at birth, The Young Man has felt pieces of his emotional self die off slowly over the years. He feels unable to love anyone or feel anything other than “cool disinterest.” The Young Man is, in his own estimation, incomplete, and he feels “nothing”—no emotions, good or bad. The Young Man’s story parallels the story of the “bumble” Mommy and Daddy brought home from an adoption agency run by Mrs. Barker many years ago. When they were dissatisfied with how the baby they’d adopted was growing up, they began mutilating and torturing it in an attempt to make it conform to their ideas of how a young man should be. The Young Man’s monologue to Grandma reveals that while Mommy and Daddy’s “bumble”—The Young Man’s twin brother—was suffering physically, The Young Man was experiencing a simultaneous emotional deterioration that he could not explain. Albee is using the disaffected, emotionally stunted Young Man to show that the American dream does not—and never has—existed. While impoverished and marginalized people have suffered in the shadows of America for years and years, those who seem to embody the American dream are impoverished in a different way. Aware that something is deeply wrong but unable to name what plagues them, they carry outwardly the hallmarks of success, health, and happiness, but when cornered are forced to admit to an underlying “agony” which renders them traumatized and disaffected.

Though “life, liberty, and the pursuit of happiness” are literally written into the core documents and doctrines of American society, these things are, in Albee’s estimation, a “dream” only in the sense that they are fleeting, unattainable, and fictitious. Albee shows, through this play, how even those who seem to embody the American dream are actually far from achieving it, for reasons that are not just personal but also structural and societal.

The Fallacy of The American Dream ThemeTracker 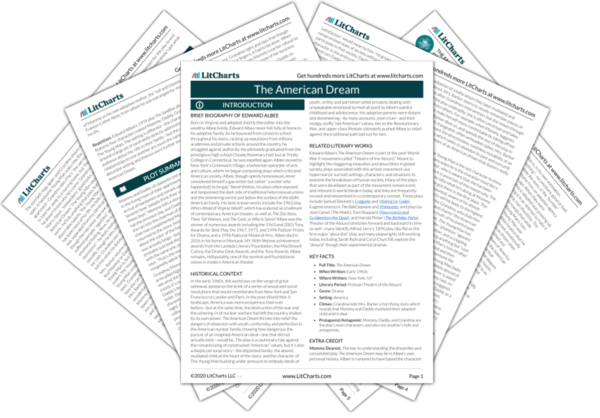 MOMMY: I don’t know what can be keeping them.

DADDY: That’s the way things are today, and there’s nothing you can do about it.

MOMMY: Of course not; it never fails. People think they can get away with anything these days…

YOUNG MAN: All the boxes are outside.

GRANDMA (a little sadly): I don’t know why I bother to take them with me. They don’t have much in them… some old letters, a couple of regrets… Pekinese… blind at that… the television… my Sunday teeth… eighty-six years of living… some sounds… a few images, a little garbled by now… and, well… (she shrugs) …you know… the things one accumulates. 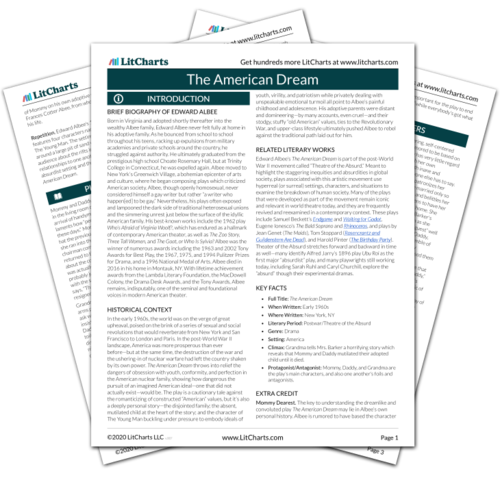 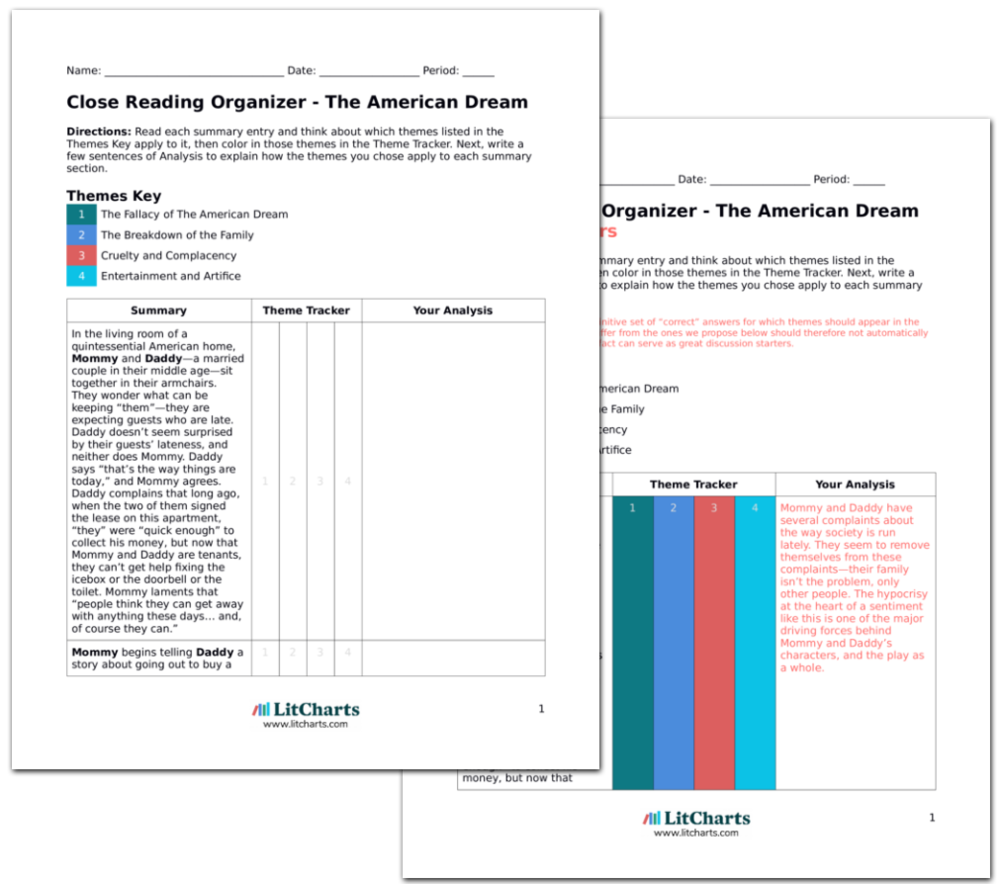