Download this LitChart! (PDF)
Teachers and parents! Struggling with distance learning? Our Teacher Edition on The Breadwinner can help.

Welcome to the LitCharts study guide on Deborah Ellis's The Breadwinner. Created by the original team behind SparkNotes, LitCharts are the world's best literature guides.

A concise biography of Deborah Ellis plus historical and literary context for The Breadwinner.

A quick-reference summary: The Breadwinner on a single page.

In-depth summary and analysis of every chapter of The Breadwinner. Visual theme-tracking, too.

Explanations, analysis, and visualizations of The Breadwinner's themes.

The Breadwinner's important quotes, sortable by theme, character, or chapter.

Description, analysis, and timelines for The Breadwinner's characters.

Explanations of The Breadwinner's symbols, and tracking of where they appear.

An interactive data visualization of The Breadwinner's plot and themes.

Born in Cochrane, Ontario, Deborah Ellis decided at age 11 that she wanted to write. She moved to Toronto at age 17 to work as an activist advocating for nonviolence. Ellis’s first novel, Looking for X, won the Governor General’s Literary Award for children’s literature in 2000. However, Ellis is best known for the Breadwinner series. In 1997, she traveled to Pakistan to interview Afghan women in refugee camps. Though she had a different book in mind when she went, an interview with a woman whose daughter dressed as a boy so she could feed the family caught her attention and resulted in The Breadwinner. Since then, Ellis has traveled to Africa, South America, and throughout the Middle East to interview women and children for her novels and nonfiction works. All the royalties she receives from her books go to organizations like Canadian Women for Women in Afghanistan and UNICEF.
Get the entire The Breadwinner LitChart as a printable PDF.
"My students can't get enough of your charts and their results have gone through the roof." -Graham S.
Download 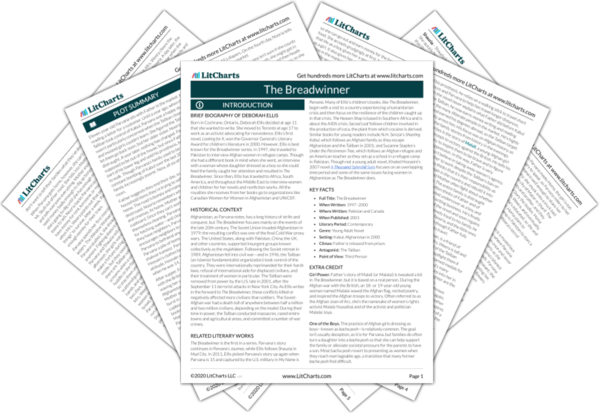 Historical Context of The Breadwinner

Afghanistan, as Parvana notes, has a long history of strife and conquest, but The Breadwinner focuses mainly on the events of the late 20th century. The Soviet Union invaded Afghanistan in 1979; the resulting conflict was one of the final Cold War proxy wars. The United States, along with Pakistan, China, the UK, and other countries, supported insurgent groups known collectively as the mujahideen. Following the Soviet retreat in 1989, Afghanistan fell into civil war—and in 1996, the Taliban (an Islamist fundamentalist organization) took control of the country. They were internationally reprimanded for their harsh laws, refusal of international aide for displaced civilians, and their treatment of women in particular. The Taliban were removed from power by the U.S. late in 2001, after the September 11 terrorist attacks in New York City. As Ellis writes in the forward to The Breadwinner, these conflicts killed or negatively affected more civilians than soldiers. The Soviet-Afghan war had a death toll of anywhere between half a million and two million civilians, depending on the model. During their time in power, the Taliban conducted massacres, razed entire towns and agricultural areas, and committed a number of war crimes.

Other Books Related to The Breadwinner

The Breadwinner is the first in a series. Parvana’s story continues in Parvana’s Journey, while Ellis follows Shauzia in Mud City. In 2011, Ellis picked Parvana’s story up again when Parvana is 15 and captured by the U.S. military in My Name is Parvana. Many of Ellis’s children’s books, like The Breadwinner, begin with a visit to a country experiencing a humanitarian crisis and then focus on the resilience of the children caught up in that crisis. The Heaven Shop is based in Southern Africa and is about the AIDS crisis; Sacred Leaf follows children involved in the production of coca, the plant from which cocaine is derived. Similar books for young readers include N.H. Senzai’s Shooting Kabul, which follows an Afghani family as they escape Afghanistan and the Taliban in 2001; and Suzanne Staples’s Under the Persimmon Tree, which follows an Afghan refugee and an American teacher as they set up a school in a refugee camp in Pakistan. Though not a young adult novel, Khaled Hosseini’s 2007 novel A Thousand Splendid Suns focuses on an overlapping time period and some of the same issues facing women in Afghanistan as The Breadwinner does.
Key Facts about The Breadwinner

Extra Credit for The Breadwinner

Girl Power. Father’s story of Malali (or Malalai) is tweaked a bit in The Breadwinner, but it is based on a real person. During the Afghan war with the British, an 18- or 19-year-old young woman named Malalai waved the Afghan flag, recited poetry, and inspired the Afghan troops to victory. Often referred to as the Afghan Joan of Arc, she’s the namesake of women’s rights activist Malala Yousafzai and of the activist and politician Malalai Joya.

One of the Boys. The practice of Afghan girls dressing as boys—known as bacha posh—is relatively common. The goal isn’t usually deception, as it is for Parvana, but families do often turn a daughter into a bacha posh so that she can help support the family or alleviate societal pressure for the parents to have a son. Most bacha posh revert to presenting as women when they reach marriageable age, a transition that many former bacha posh find difficult. 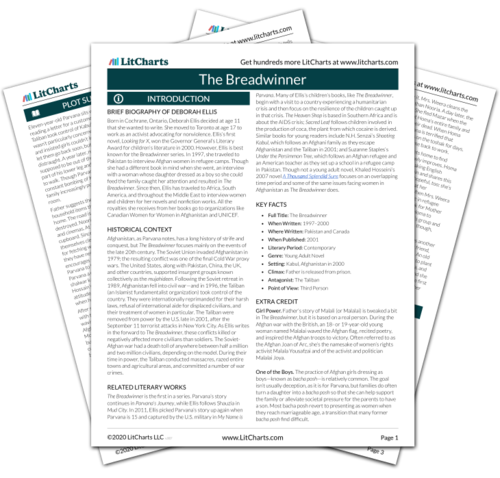 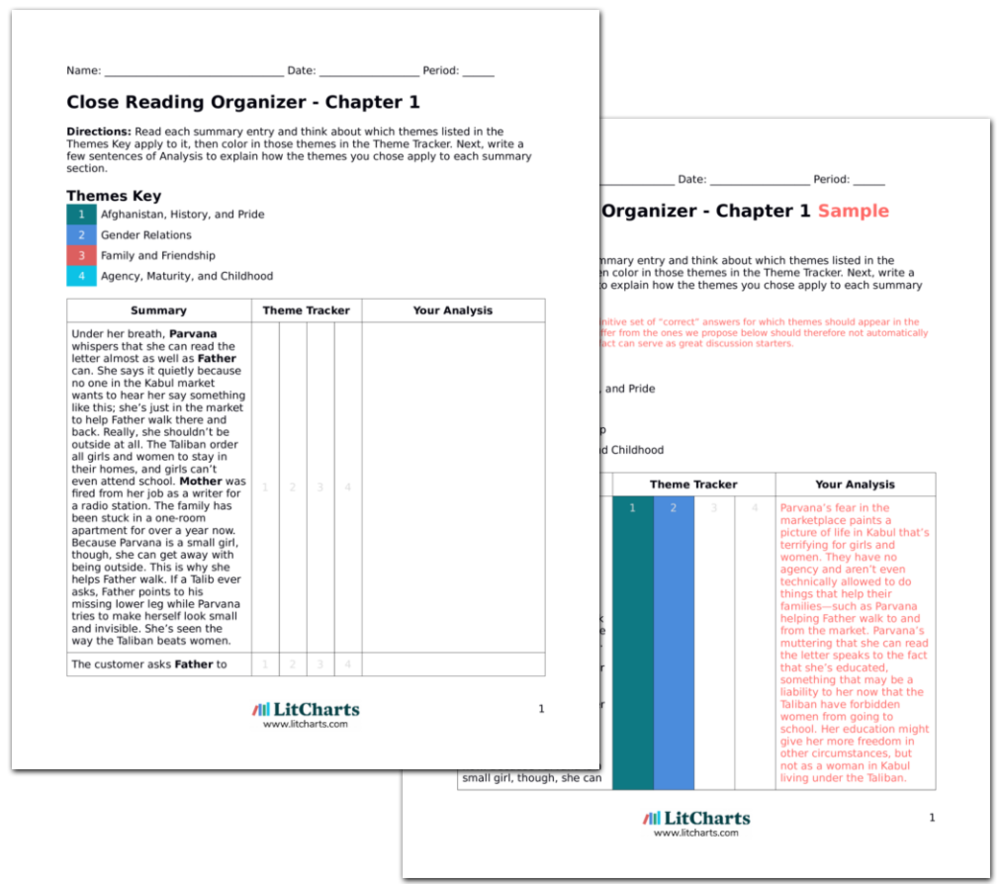