Download this LitChart! (PDF)
Teachers and parents! Struggling with distance learning? Our Teacher Edition on The Caretaker can help.

Welcome to the LitCharts study guide on Harold Pinter's The Caretaker. Created by the original team behind SparkNotes, LitCharts are the world's best literature guides.

A concise biography of Harold Pinter plus historical and literary context for The Caretaker.

A quick-reference summary: The Caretaker on a single page.

In-depth summary and analysis of every scene of The Caretaker. Visual theme-tracking, too.

Explanations, analysis, and visualizations of The Caretaker's themes.

The Caretaker's important quotes, sortable by theme, character, or scene.

Description, analysis, and timelines for The Caretaker's characters.

Explanations of The Caretaker's symbols, and tracking of where they appear.

An interactive data visualization of The Caretaker's plot and themes.

Harold Pinter was born on October 10, 1930, in a working-class neighborhood in east London to British Jewish parents Hyman “Jack” and Frances Pinter. In 1940 and 1941, after the Blitz, Pinter was evacuated from his family home in London and sent away to Cornwall and Reading for his safety. This experience had a profound impact on Pinter, instilling within him lasting feelings of loneliness and alienation that would color many of his later works, including The Caretaker. As a young boy, Pinter was educated at the Hackney Downs School, where he began writing poetry. After leaving school, Pinter worked as an actor, touring with the Anew McMaster repertory company in the early 1950s, as well as the Donald Wolfit Company. He wrote his first play, The Room, in 1957, following this with The Birthday Party, his first full-length play, that same year. Written in 1959 and first produced in 1960, The Caretaker is Pinter’s second full-length play, and it was the first of his plays to be commercially successful. He continued to write plays into the 1970s and later decades, but his earlier plays are the works for which he is best known. Pinter was the recipient of many awards over the course of his career, most notably the Nobel Prize in Literature in 2005. His works are best known for their opaque, repetitive dialogue, which is often punctuated by silence. He died of liver cancer on December 24, 2008.
Get the entire The Caretaker LitChart as a printable PDF.
"My students can't get enough of your charts and their results have gone through the roof." -Graham S.
Download 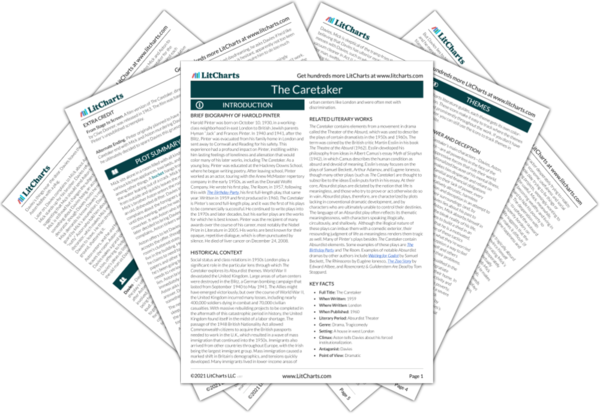 Historical Context of The Caretaker

Social status and class relations in 1950s London play a significant role in the particular lens through which The Caretaker explores its Absurdist themes. World War II devastated the United Kingdom. Large areas of urban centers were destroyed in the Blitz, a German bombing campaign that lasted from September 1940 to May 1941. The Allies might have emerged victoriously, but over the course of World War II, the United Kingdom incurred many losses, including nearly 400,000 soldiers dying in combat and 70,000 civilian casualties. With massive rebuilding projects to be completed in the aftermath of this catastrophic period in history, the United Kingdom found itself in the midst of a labor shortage. The passage of the 1948 British Nationality Act allowed Commonwealth citizens to acquire the British passports needed to work in the U.K., which resulted in a wave of mass immigration that continued into the 1950s. Immigrants also arrived from other countries throughout Europe, with the Irish being the largest immigrant group. Mass immigration caused a marked shift in Britain’s demographics, and tensions quickly developed. Many immigrants lived in lower-income areas of urban centers like London and were often met with discrimination.

Other Books Related to The Caretaker

The Caretaker contains elements from a movement in drama called the Theater of the Absurd, which was used to describe the plays of certain dramatists in the 1950s and 1960s. The term was coined by the British critic Martin Esslin in his book The Theatre of the Absurd (1962). Esslin developed his philosophy from ideas in Albert Camus’s essay Myth of Sisyphus (1942), in which Camus describes the human condition as absurd and devoid of meaning. Esslin’s essay focuses on the plays of Samuel Beckett, Arthur Adamov, and Eugene Ionesco, though many other plays (such as The Caretaker) are thought to subscribe to the ideas Esslin puts forth in his essay. At their core, Absurdist plays are dictated by the notion that life is meaningless, and those who try to prove or act otherwise do so in vain. Absurdist plays, therefore, are characterized by plots lacking in conventional dramatic development, and by characters who are ultimately unable to control their destinies. The language of an Absurdist play often reflects its thematic meaninglessness, with characters speaking illogically, circuitously, and shallowly.  Although the illogical nature of these plays can imbue them with a comedic exterior, their resounding judgment of life as meaningless renders them tragic as well. Many of Pinter’s plays besides The Caretaker contain Absurdist elements. Some examples of these plays are The Birthday Party and The Room. Examples of notable Absurdist dramas by other authors include Waiting for Godot by Samuel Beckett, The Rhinoceros by Eugène Ionesco, The Zoo Story by Edward Albee, and Rosencrantz & Guildenstern Are Dead by Tom Stoppard.
Key Facts about The Caretaker

Extra Credit for The Caretaker

From Stage to Screen. A film version of The Caretaker, directed by Clive Donner, was released in 1963. The film was based on Pinter’s unpublished screenplay.

Alternate Ending. Pinter originally planned to have The Caretaker end with Mick and Aston murdering Davies, though he ultimately decided to spare Davies this gruesome fate. 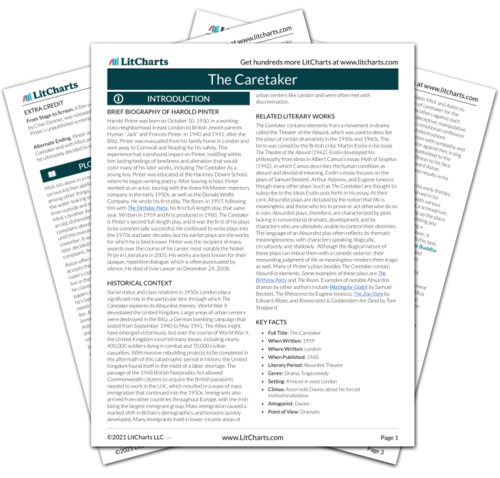 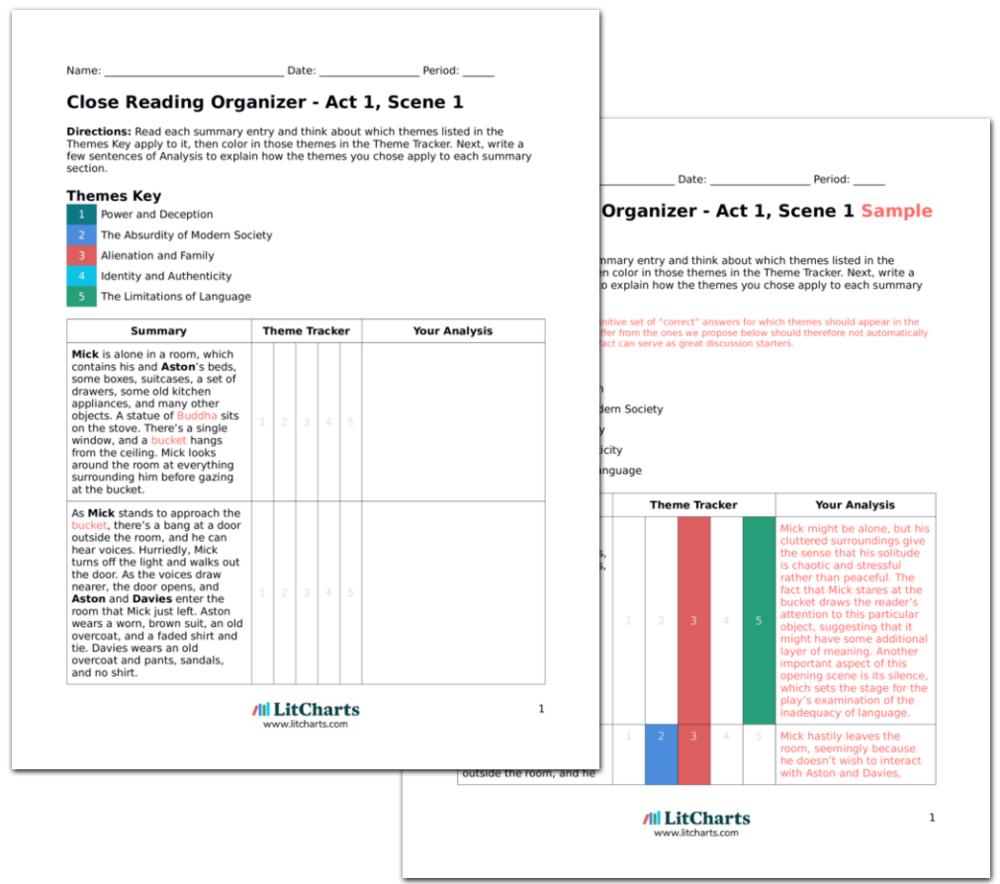