Undine Spragg lives with her parents, Mr. Spragg and Mrs. Spragg, at a hotel in New York City called the Stentorian. It has a view of Fifth Avenue, but it isn’t quite part of that fashionable area. Her family is originally from Apex, a city in the Midwest where Mr. Spragg recently made his fortune. In her first two years in the city, Undine has not been successful in meeting members of New York’s high society, but one day she gets an invitation to a dinner party hosted by Laura Fairford, the sister of Ralph Marvell. Along with the Dagonets, the Marvells are one of the most fashionable families in New York, and Undine tries to make connections.

Eventually, Ralph takes a liking to Undine and proposes to her. Before they can get married, however, Elmer Moffatt shows up in New York. Elmer is originally from Apex, and he was Undine’s first husband. If news got out that Undine was already divorced, it would be a major scandal that could end her engagement with Ralph. Elmer agrees to stay silent, as long as Undine introduces him to any useful business partners she happens to meet through her marriage. So at last, Ralph and Undine get married.

During their honeymoon in Europe, Ralph realizes that he’ll have a hard time finding enough money to pay for all of Undine’s extravagant desires. Even in the most scenic parts of Europe, Undine gets bored whenever there isn’t a crowd of people around her. Eventually, the couple has to return home when Undine realizes that she is pregnant with a son, Paul Marvell.

Back in New York, Ralph and Undine’s marriage dissolves over the course of several years. Undine begins spending time with Peter Van Degen (the husband of Ralph’s cousin Clare Van Degen), who in spite of being married, has a reputation as a notorious playboy. One turning point is when Undine forgets to pick up Paul to bring him to his own birthday party. Undine gets the idea that she would be happier in Europe, so using the excuse that it’s for her own health, she leaves Ralph and Paul to go to France.

In France, Undine makes plans to divorce Ralph and marry Peter, who is richer and so who would better be able to pay for Undine’s lifestyle. Although Peter initially seems willing to leave his wife, when the two of them go back to the United States to finalize their divorces and meet up again, Peter dumps Undine.

Without a husband, Undine goes back to Paris, where she attracts the attention of the French marquis Raymond de Chelles. Raymond comes from a wealthy, traditional family of French Catholics, which means that they don’t believe in divorce, at least without an official annulment. Running low on money as she tries to figure out how to procure an annulment, Undine happens to run into Elmer Moffatt again, and he gives her an unusual suggestion: to use her custody over Paul to get money from Ralph.

Ralph and his family have been raising Paul in Undine’s absence, but in order to avoid a scandal, he carelessly signed all the divorce papers without looking at what they said. After speaking with his cousin Clare, Ralph realizes that Undine is only enforcing her custody over Paul as a way to raise money, and so he borrows a lot of money from his family and takes it to Elmer Moffatt for a legally dubious business deal that will take place in Apex. The deal doesn’t go through in time to meet Undine’s lawyers’ deadline, and in the process, Ralph learns about Undine’s first marriage to Elmer. Ralph commits suicide, which allows Undine to marry Raymond. The funds that Ralph invested make a profit three months later.

Undine marries Raymond and takes Paul to France with her. Though she is happy for a short time, she comes to resent Raymond, who makes her spend long months in an isolated chateau at Saint Desert rather than Paris, where she’d prefer to be. For a while, even the willful Undine feels trapped by the force of Raymond’s old traditions. But one day, she happens to run into her ex-husband Elmer Moffatt, who has become extremely wealthy and who just so happens to be looking at tapestries owned by Raymond’s family.

Elmer and Undine begin spending more time together, and eventually, Elmer suggests that if she divorces Raymond, he’d be willing to marry her. After some persuading, Undine agrees. A couple years later, Undine has everything she ever wanted at the beginning of the novel—Elmer is the first husband who can afford even her most expensive wishes. Paul, however, is left alone to wander through a big, empty hotel while his parents are off traveling the world. Just as Undine is about to host a triumphant dinner party, she begins to imagine what it would be like to be the wife of an ambassador—something that will never happen because of Undine’s many divorces. 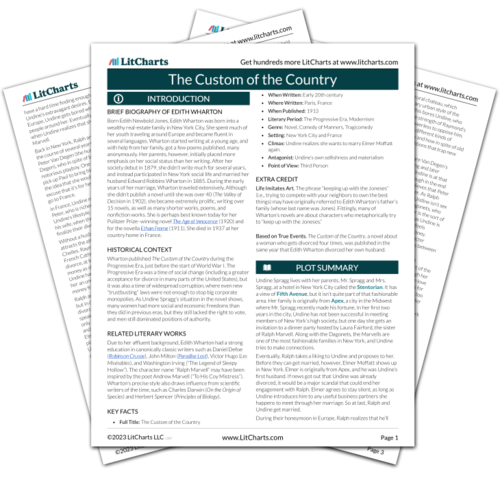 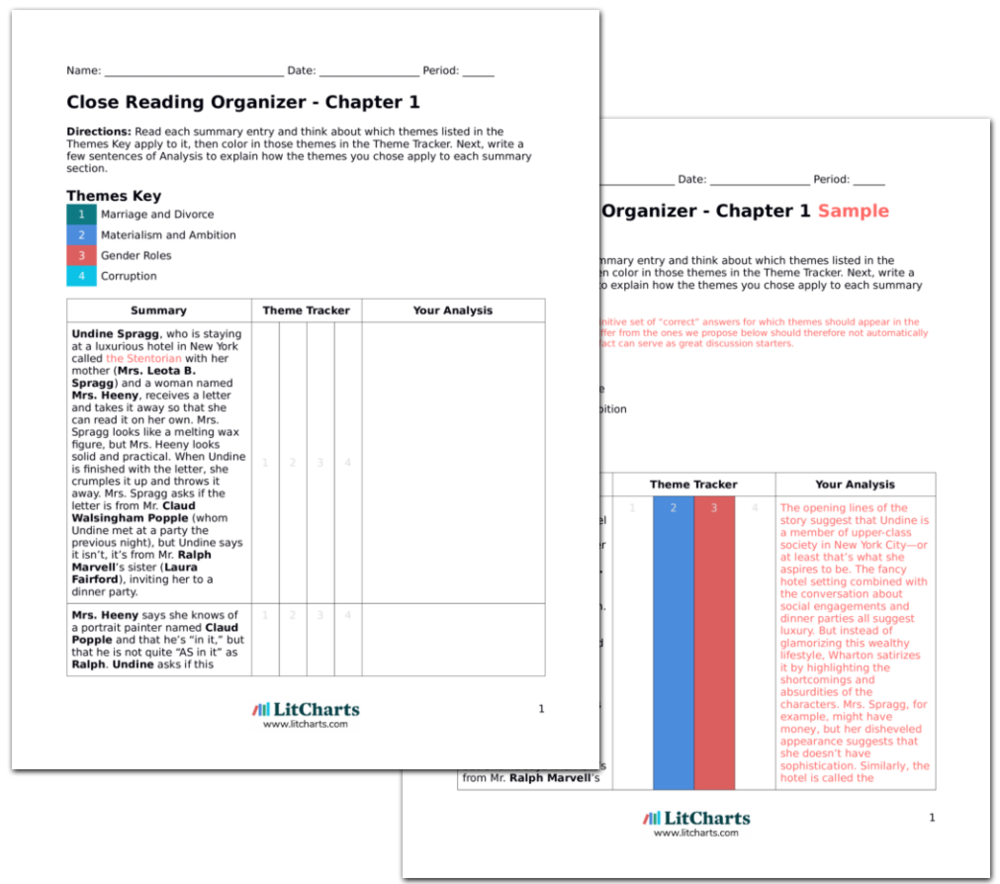