Download this LitChart! (PDF)
Teachers and parents! Struggling with distance learning? Our Teacher Edition on The Devoted Friend can help.

Welcome to the LitCharts study guide on Oscar Wilde's The Devoted Friend. Created by the original team behind SparkNotes, LitCharts are the world's best literature guides.

A concise biography of Oscar Wilde plus historical and literary context for The Devoted Friend.

A quick-reference summary: The Devoted Friend on a single page.

In-depth summary and analysis of every of The Devoted Friend. Visual theme-tracking, too.

Explanations, analysis, and visualizations of The Devoted Friend's themes.

The Devoted Friend's important quotes, sortable by theme, character, or .

Description, analysis, and timelines for The Devoted Friend's characters.

Explanations of The Devoted Friend's symbols, and tracking of where they appear.

An interactive data visualization of The Devoted Friend's plot and themes.

The child of well-off Irish parents, Oscar Wilde studied the classics at Trinity College in Dublin at the age of seventeen and matriculated to Magdalen College, University of Oxford, three years later. At Magdalen, Wilde’s studies remained classically focused, but his eye was nevertheless caught by the emerging decadent movement and aestheticism, the late-nineteenth-century movement in England that advocated “art for art’s sake.” His best-known works include his only novel, The Picture of Dorian Grey (1891), and the comedic play The Importance of Being Earnest (1895). During his lifetime, he was known for his witty aphorisms, eccentric taste in clothing, and, of course, the infamous court action surrounding his relationship with Lord Alfred Douglas. In 1895, he was tried and found guilty by the state of having committed sodomy—homosexuality was, at the time, criminal. He was sentenced to two years of hard labor. Wilde’s time in prison was at odds with his previous, posh life, and he did not fare well there. After his imprisonment ended in 1897, he sailed to France and never returned to England, dying in Paris of meningitis just three years later.
Get the entire The Devoted Friend LitChart as a printable PDF.
"My students can't get enough of your charts and their results have gone through the roof." -Graham S.
Download 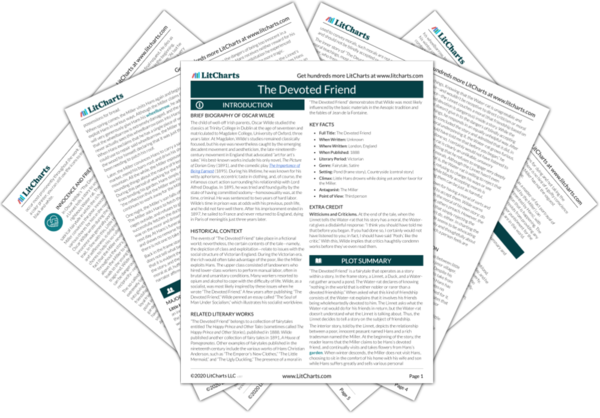 Historical Context of The Devoted Friend

The events of “The Devoted Friend” take place in a fictional world; nevertheless, the certain contents of the tale—namely, the depiction of class and exploitation—relate to issues with the social structure of Victorian England. During the Victorian era, the rich would often take advantage of the poor, like the Miller exploits Hans. The upper class consisted of landowners who hired lower-class workers to perform manual labor, often in brutal and unsanitary conditions. Many workers resorted to opium and alcohol to cope with the difficulty of life. Wilde, as a socialist, was most likely inspired by these issues when he wrote “The Devoted Friend.” A few years after publishing “The Devoted Friend,” Wilde penned an essay called “The Soul of Man Under Socialism,” which illustrates his socialist worldview.

Other Books Related to The Devoted Friend

“The Devoted Friend” belongs to a collection of fairytales entitled The Happy Prince and Other Tales (sometimes called The Happy Prince and Other Stories), published in 1888. Wilde published another collection of fairy tales in 1891, A House of Pomegranates. Other examples of fairytales published in the nineteenth century include the various works of Hans Christian Anderson, such as “The Emperor’s New Clothes,” “The Little Mermaid,” and “The Ugly Duckling.” The presence of a moral in “The Devoted Friend” demonstrates that Wilde was most likely influenced by the basic materials in the Aesopic tradition and the fables of Jean de la Fontaine.
Key Facts about The Devoted Friend

Extra Credit for The Devoted Friend

Witticisms and Criticisms. At the end of the tale, when the Linnet tells the Water-rat that his story has a moral, the Water-rat gives a disdainful response: “I think you should have told me that before you began. If you had done so, I certainly would not have listened to you; in fact, I should have said ‘Pooh,’ like the critic.” With this, Wilde implies that critics haughtily condemn works before they’ve even read them. 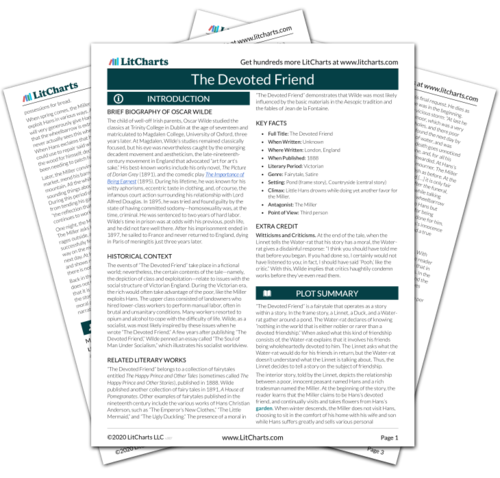 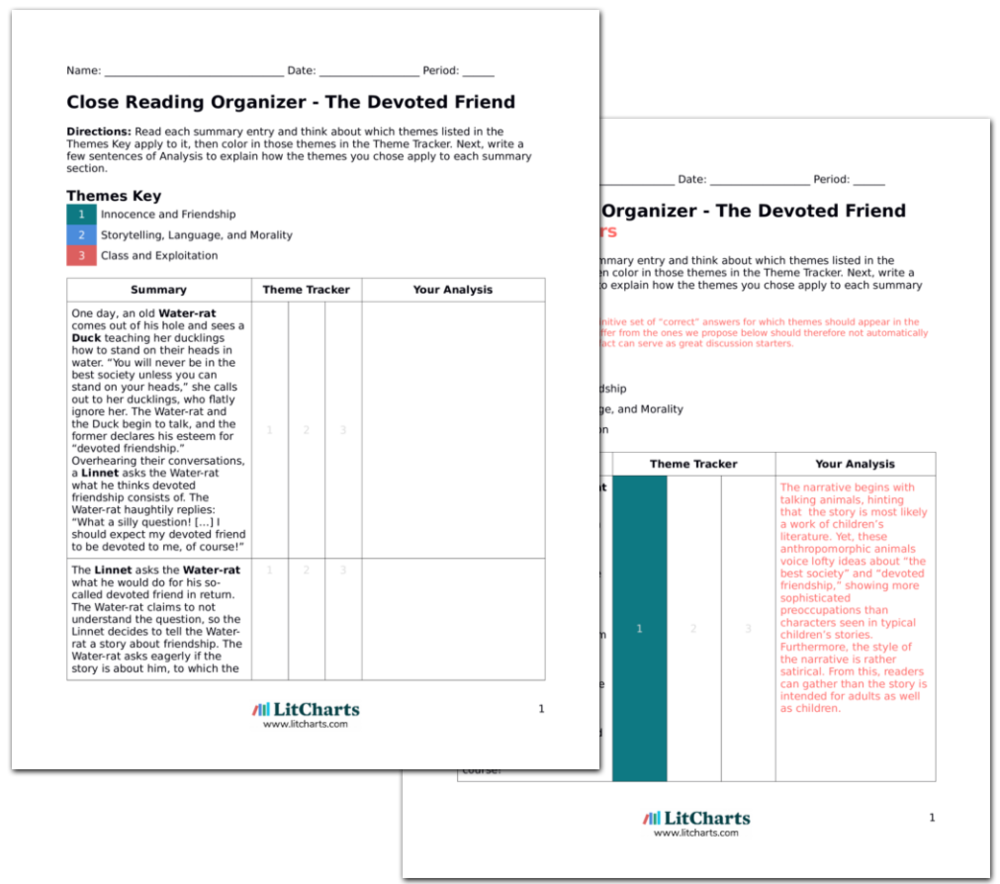