Download this LitChart! (PDF)
Teachers and parents! Struggling with distance learning? Our Teacher Edition on The Dharma Bums can help.

Welcome to the LitCharts study guide on Jack Kerouac's The Dharma Bums. Created by the original team behind SparkNotes, LitCharts are the world's best literature guides.

A concise biography of Jack Kerouac plus historical and literary context for The Dharma Bums.

A quick-reference summary: The Dharma Bums on a single page.

In-depth summary and analysis of every chapter of The Dharma Bums. Visual theme-tracking, too.

Explanations, analysis, and visualizations of The Dharma Bums's themes.

Description, analysis, and timelines for The Dharma Bums's characters.

Description, analysis, and timelines for The Dharma Bums's terms.

Explanations of The Dharma Bums's symbols, and tracking of where they appear.

An interactive data visualization of The Dharma Bums's plot and themes.

Jack Kerouac was born and raised in a French Canadian family in the Boston suburbs. His older brother’s sudden death at age nine, as well as his intense early experiences in the Catholic Church, left a mark on his life and work. A star football player in high school, Kerouac won an athletic scholarship to Columbia University but broke his leg in his first year and dropped out in his second. He met the other pioneering writers of the Beat Generation during this time, including Allen Ginsberg (who appears in The Dharma Bums as Alvah Goldbrook) and Neal Cassady (the central figure of Kerouac’s most well-known novel, On the Road). Kerouac then spent a year in the Merchant Marine, during which he wrote his first book, The Sea Is My Brother (which was not published until 2011). During World War II, he joined the Navy but was quickly discharged for psychiatric reasons. Kerouac lived on and off in New York for the next decade. In the process, he took several cross-country trips, married and divorced twice, and wrote more than 10 books, including On the Road. The events he recounts in The Dharma Bums occurred in the two years before he published On the Road in 1957. The book was an instant success, and Kerouac was soon identified as “the king of the beat generation.” He published The Dharma Bums the next year but was widely criticized for his interpretation of Buddhism. Over the next five years, he sold almost a dozen of the manuscripts he had written in the previous decade, and he became a fixture of American popular culture by the mid-1960s. However, during this period, Kerouac’s mother, sister, and close friend Neal Cassady all passed away. Kerouac himself followed in 1969, dying of an internal hemorrhage related to his lifelong alcoholism.
Get the entire The Dharma Bums LitChart as a printable PDF.
"My students can't get enough of your charts and their results have gone through the roof." -Graham S.
Download 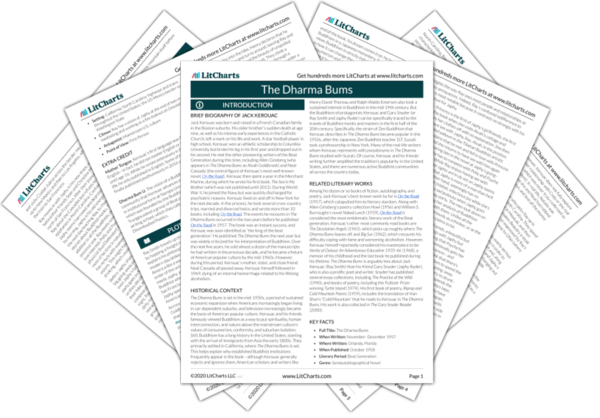 Historical Context of The Dharma Bums

The Dharma Bums is set in the mid-1950s, a period of sustained economic expansion when Americans increasingly began living in car-dependent suburbs, and television increasingly became the basis of American popular culture. Kerouac and his friends famously viewed Buddhism as a way to put spirituality, human interconnection, and nature above the mainstream culture’s values of consumerism, conformity, and suburban isolation. Still, Buddhism has a long history in the United States, starting with the arrival of immigrants from Asia the early 1800s. They primarily settled in California, where The Dharma Bums is set. This helps explain why established Buddhist institutions frequently appear in the book—although Kerouac generally rejects and ignores them. American scholars and writers like Henry David Thoreau and Ralph Waldo Emerson also took a sustained interest in Buddhism in the mid-19th century. But the Buddhism of protagonists Kerouac and Gary Snyder (or Ray Smith and Japhy Ryder) can be specifically traced to the travels of Buddhist monks and masters in the first half of the 20th century. Specifically, the strain of Zen Buddhism that Kerouac describes in The Dharma Bums became popular in the 1950s, after the Japanese Zen Buddhist teacher D.T. Suzuki took a professorship in New York. Many of the real-life writers whom Kerouac represents with pseudonyms in The Dharma Bums studied with Suzuki. Of course, Kerouac and his friends’ writing further amplified the tradition’s popularity in the United States, and there are numerous active Buddhist communities all across the country today.

Other Books Related to The Dharma Bums

Among his dozen or so books of fiction, autobiography, and poetry, Jack Kerouac’s best-known work by far is On the Road (1957), which catapulted him to literary stardom. Along with Allen Ginsberg’s poetry collection Howl (1956) and William S. Burroughs’s novel Naked Lunch (1959), On the Road is considered the most emblematic literary work of the Beat generation. Kerouac’s other most commonly read books are The Desolation Angels (1965), which picks up roughly where The Dharma Bums leaves off, and Big Sur (1962), which recounts his difficulty coping with fame and worsening alcoholism. However, Kerouac himself reportedly considered his masterpiece to be Vanity of Duluoz: An Adventurous Education 1935-46 (1968), a memoir of his childhood and the last book he published during his lifetime. The Dharma Bums is arguably less about Jack Kerouac (Ray Smith) than his friend Gary Snyder (Japhy Ryder), who is also a prolific poet and writer. Snyder has published several essay collections, including The Practice of the Wild (1990), and books of poetry, including the Pulitzer Prize-winning Turtle Island (1974). His first book of poetry, Riprap and Cold Mountain Poems (1959), includes the translation of Han Shan’s “Cold Mountain” that he reads to Kerouac in The Dharma Bums. His work is also collected in The Gary Snyder Reader (2000).
Key Facts about The Dharma Bums

Extra Credit for The Dharma Bums

Mother Tongue. Kerouac’s first language was French, not English—in fact, he did not master English or lose his accent until age 16. While he wrote extensively in French during his life, he only published in English. Some of his French poetry was finally published posthumously in 2016 as La vie est d’hommage.

Dharma Bum U. The vision of a Buddhist intellectual community that Kerouac advances in The Dharma Bums lives on in institutional form at Naropa University in Boulder, Colorado, which was founded by the Buddhist master Chögyam Trungpa. Trungpa asked a group of Beat poets to develop the university’s writing school, which they called the Jack Kerouac School of Disembodied Poetics. 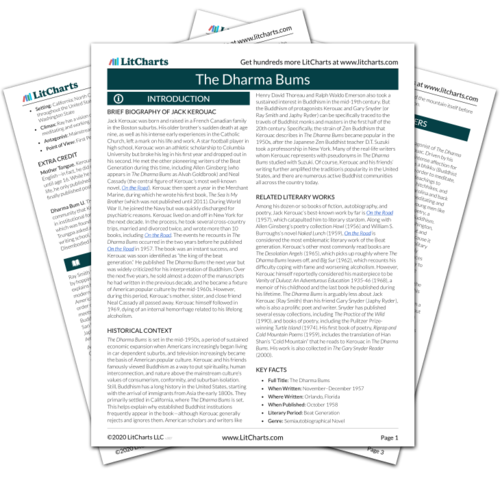 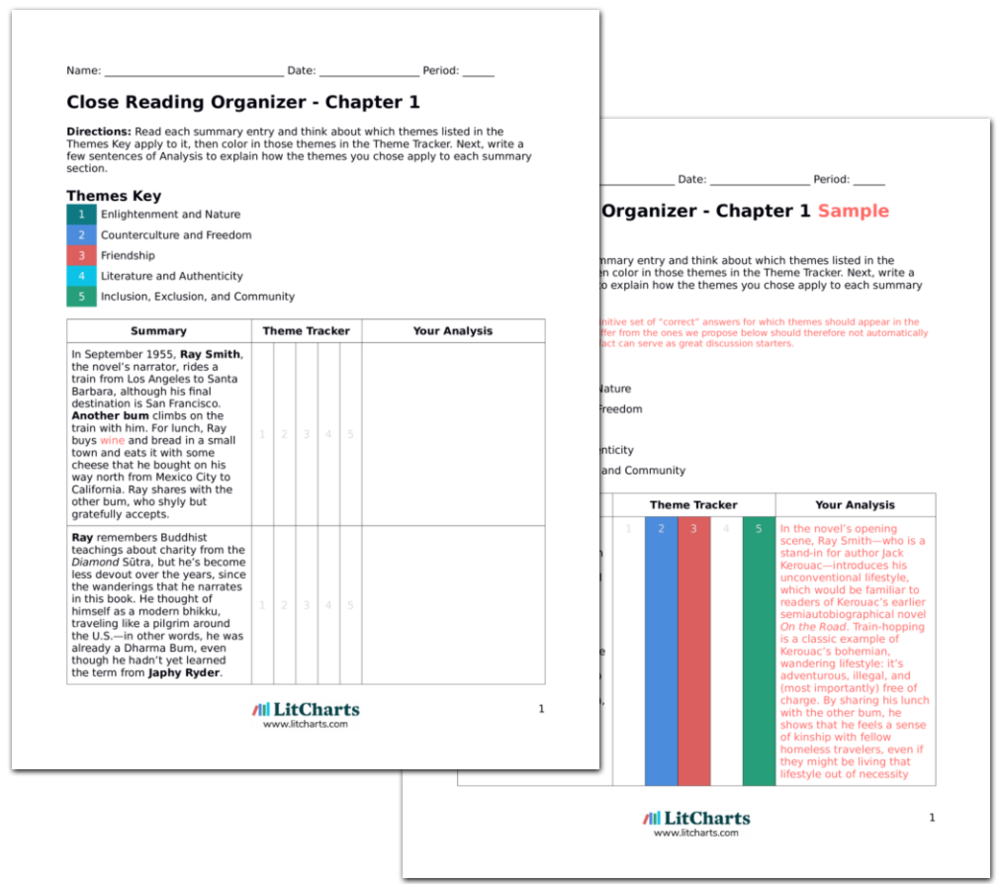