Download this LitChart! (PDF)
Teachers and parents! Struggling with distance learning? Our Teacher Edition on The House of the Spirits can help.

Welcome to the LitCharts study guide on Isabel Allende's The House of the Spirits. Created by the original team behind SparkNotes, LitCharts are the world's best literature guides.

The House of the Spirits: Introduction

A concise biography of Isabel Allende plus historical and literary context for The House of the Spirits.

The House of the Spirits: Plot Summary

A quick-reference summary: The House of the Spirits on a single page.

The House of the Spirits: Detailed Summary & Analysis

In-depth summary and analysis of every chapter of The House of the Spirits. Visual theme-tracking, too.

The House of the Spirits: Themes

Explanations, analysis, and visualizations of The House of the Spirits's themes.

The House of the Spirits: Quotes

The House of the Spirits's important quotes, sortable by theme, character, or chapter.

The House of the Spirits: Characters

Description, analysis, and timelines for The House of the Spirits's characters.

The House of the Spirits: Symbols

Explanations of The House of the Spirits's symbols, and tracking of where they appear.

The House of the Spirits: Theme Wheel

An interactive data visualization of The House of the Spirits's plot and themes.

Isabel Allende Llona was born one of three children to Francisca Llona Barres and Tomás Allende, the second secretary at the Chilean embassy, in Lima, Peru. In 1945, Allende’s parents divorced after her father left the family, and she moved to Santiago, Chile, with her mother and siblings and lived with her maternal grandparents. Allende’s grandmother was interested in spiritualism, an influence that is seen in The House of the Spirits. Allende also had unlimited access to her grandmother’s rather large library, sparking a lifelong interest in reading, especially Shakespeare. Allende’s mother remarried a Chilean diplomat, and the family traveled extensively, enrolling Allende in private schools in both Bolivia and Beirut, Lebanon. Allende finished her schooling in Chile, where she met and married her first husband in 1962 and went on to have two children. She worked for the United Nations in Chile and Europe until 1965 and translated English romance novels into Spanish on the side. During this time, Allende also worked as an editor, a journalist, and even wrote and published two children’s stories. In 1970, Allende’s father’s cousin, Salvador Allende, was elected the first socialist President of Chile, and in 1973, was overthrown in a military coup d’état. During the coup, President Allende reportedly committed suicide; however, it is suspected that he was killed by the opposition. Much like the character of Alba in The House of the Spirits, Allende began helping those blacklisted by the new government escape the country, which landed Allende herself on the wanted list. She escaped to Venezuela, where she lived in exile with her family for 13 years. During this time, Allende wrote and published The House of the Spirits (originally in Spanish) in 1982, to critical and popular acclaim. Over the next several years, Allende wrote many novels and nonfiction works, such as Eva Luna in 1987 and Paula in 1994. She is the recipient of numerous awards and accolades, including the Hispanic Heritage Award in Literature in 1996, the Chilean National Prize for Literature in 2010, and the United States Presidential Medal of Freedom in 2014. Allende lives in California with her husband, Roger Cukras, and is considered the most widely read Spanish-language author in the world.
Get the entire The House of the Spirits LitChart as a printable PDF.
"My students can't get enough of your charts and their results have gone through the roof." -Graham S.
Download 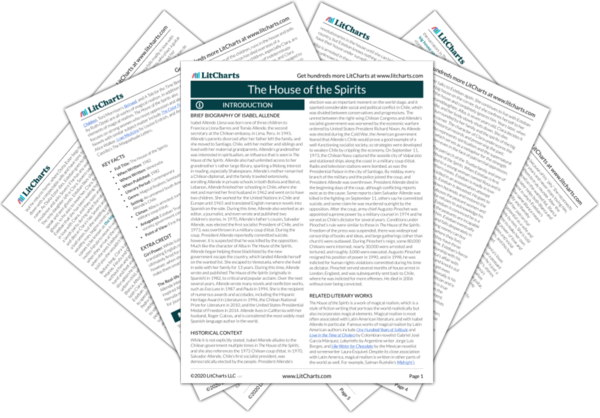 Historical Context of The House of the Spirits

While it is not explicitly stated, Isabel Allende alludes to the Chilean government multiple times in The House of the Spirits, and she also references the 1973 Chilean coup d’état. In 1970, Salvador Allende, Chile’s first socialist president, was democratically elected by the people. President Allende’s election was an important moment on the world stage, and it sparked considerable social and political conflict in Chile, which was divided between conservatives and progressives. The unrest between the right-wing Chilean Congress and Allende’s socialist government was worsened by the economic warfare ordered by United States President Richard Nixon. As Allende was elected during the Cold War, the American government feared that Allende’s Chile would prove a good example of a well-functioning socialist society, so strategies were developed to weaken Chile by crippling the economy. On September 11, 1973, the Chilean Navy captured the seaside city of Valparaíso and stationed ships along the coast in a military coup d’état. Radio and television stations were bombed, as was the Presidential Palace in the city of Santiago. By midday, every branch of the military and the police joined the coup, and President Allende was overthrown. President Allende died in the beginning days of the coup, although conflicting reports exist as to the cause. Some reports claim Salvador Allende was killed in the fighting on September 11, others say he committed suicide, and some claim he was murdered outright by the opposition. After the coup, army chief Augusto Pinochet was appointed supreme power by a military counsel in 1974 and he served as Chile’s dictator for several years. Conditions under Pinochet’s rule were similar to those in The House of the Spirits. Freedom of the press was suspended, there was widespread censorship of books and ideas, and large gatherings (other than church) were outlawed. During Pinochet’s reign, some 80,000 Chileans were interned, nearly 30,000 were arrested and tortured, and roughly 3,000 were executed. Augusto Pinochet resigned his position of power in 1990, and in 1998, he was indicted for human rights violations committed during his time as dictator. Pinochet served several months of house arrest in London, England, and was subsequently sent back to Chile, where he was indicted for more offenses. He died in 2006 without ever being convicted.

Other Books Related to The House of the Spirits

The House of the Spirits is a work of magical realism, which is a style of fiction writing that portrays the world realistically but also incorporates magical elements. Magical realism is most often associated with Latin American literature, and with Isabel Allende in particular. Famous works of magical realism by Latin American authors include One Hundred Years of Solitude and Love in the Time of Cholera by Colombian novelist Gabriel José García Márquez, Labyrinths by Argentine writer Jorge Luis Borges, and Like Water for Chocolate by the Mexican novelist and screenwriter Laura Esquivel. Despite its close association with Latin America, magical realism is written in other parts of the world as well. For example, Salman Rushdie’s Midnight’s Children, Toni Morrison’s Beloved, and A Tale for the Time Being by Ruth Ozeki are all works of magical realism. In addition to elements of magical realism, The House of the Spirits also focuses on strong women who resist oppression and abuse. Novels with similar subject matter include The Color Purple by Alice Walker, Love Medicine by Louise Erdrich, and Ana Castillo’s The Mixquiahuala Letters.
Key Facts about The House of the Spirits

Extra Credit for The House of the Spirits

Girl Power. While living in Chile in the 1960s, Allende worked translating English romance novels into Spanish. She was ultimately fired for making unauthorized changes to the books, however, when she was caught rewriting female characters to make them smarter and more independent.

The Real-life Poet. In the 1970s while working as a journalist, Allende interviewed Pablo Neruda, the Chilean writer who inspired Allende’s character, the Poet, in The House of the Spirits. Neruda reportedly told Allende she had too much imagination for journalism and told her to be a novelist instead. 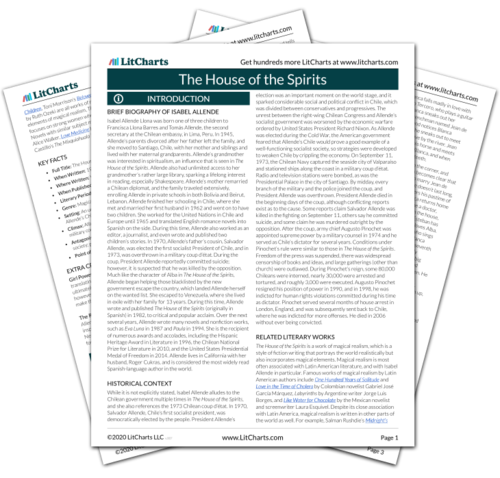 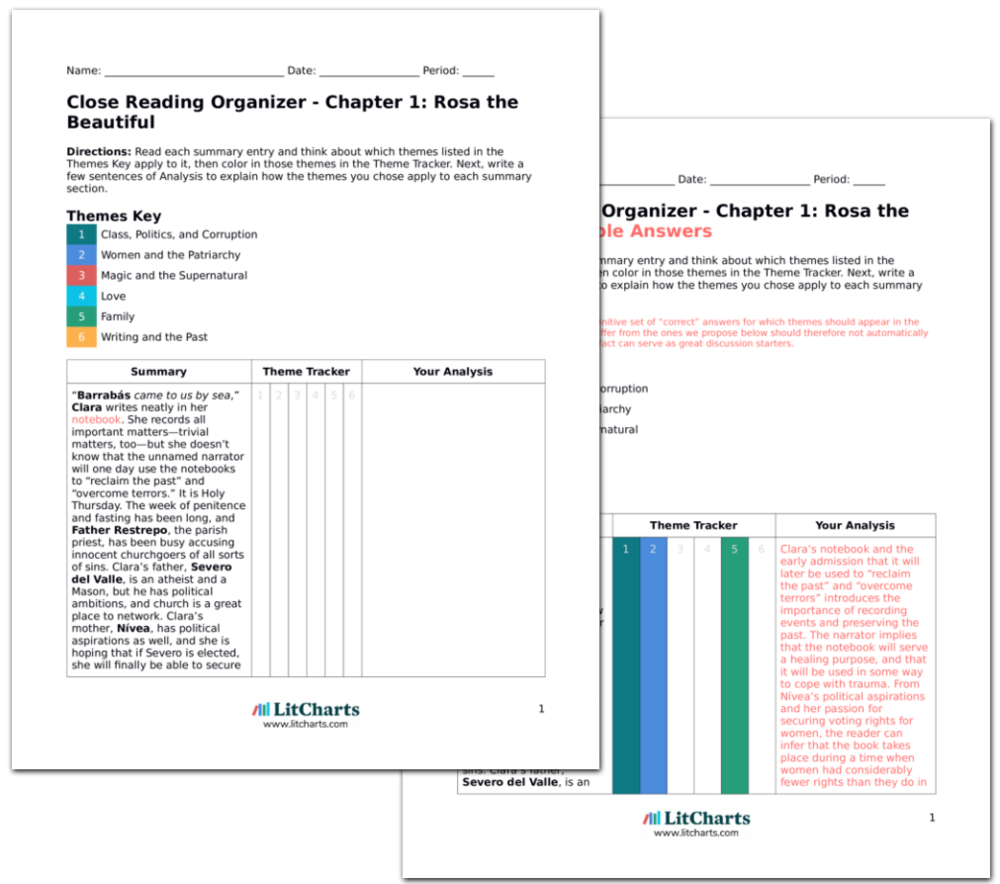