Download this LitChart! (PDF)
Teachers and parents! Struggling with distance learning? Our Teacher Edition on The Jew of Malta can help.

Welcome to the LitCharts study guide on Christopher Marlowe's The Jew of Malta. Created by the original team behind SparkNotes, LitCharts are the world's best literature guides.

The Jew of Malta: Introduction

A concise biography of Christopher Marlowe plus historical and literary context for The Jew of Malta.

The Jew of Malta: Plot Summary

A quick-reference summary: The Jew of Malta on a single page.

In-depth summary and analysis of every scene of The Jew of Malta. Visual theme-tracking, too.

The Jew of Malta: Themes

Explanations, analysis, and visualizations of The Jew of Malta's themes.

The Jew of Malta: Quotes

The Jew of Malta's important quotes, sortable by theme, character, or scene.

The Jew of Malta: Characters

Description, analysis, and timelines for The Jew of Malta's characters.

Description, analysis, and timelines for The Jew of Malta's terms.

The Jew of Malta: Symbols

Explanations of The Jew of Malta's symbols, and tracking of where they appear.

The Jew of Malta: Theme Wheel

An interactive data visualization of The Jew of Malta's plot and themes.

Not much is known about Christopher Marlowe, including his exact date of birth, but he was baptized as an infant on February 26, 1564. Marlowe was born the eldest son to John and Catherine Marlowe in the city of Canterbury in Kent, England. Marlowe’s father was a shoemaker, and young Christopher—as known as “Kit’—attended the King’s School in Canterbury, England’s oldest public school. He later attended Corpus Christi College at the University of Cambridge on a scholarship and was awarded a Bachelor of Arts degree in 1584. Marlowe continued at Cambridge and began studying for a Master of Arts degree, and he completed his graduate studies in 1587; however, Marlowe’s degree was initially withheld due to his excessive absenteeism. He was eventually awarded his degree after Queen Elizabeth I insisted that Marlowe’s absences were on behalf of his “good service” to England. What kind of “service” Marlowe provided is not known, and this uncertainty has fueled longstanding suspicions that Marlowe may have been a secret spy working on behalf of England and the Queen. It is thought that Marlowe wrote his first play, Dido, Queen of Carthage, during his time at Cambridge. The play was first performed the same year Marlowe graduated, but it was not published until after his death in 1594. Marlowe’s most famous play, Tamburlaine the Great, was also first performed in 1587, and it was his first play to be staged in London. Marlowe then wrote Tamburlaine the Great, Part II, and both plays were wildly popular and published in 1590. The Jew of Malta was likely written around 1589, but the play was not performed until 1592, and it wasn’t published until 1594. Marlowe’s next play, Edward the Second, was first performed in July of 1593, just weeks after Marlowe’s murder at the age of 29. He is also remembered for Doctor Faustus, although it is unknown when the play was written or first performed. In the early 1590s, Marlowe shared a room with Thomas Kyd, a fellow English playwright and author of The Spanish Tragedy, and both men were arrested in May of 1593 after heretical literature was found in their room. Kyd confessed under torture that the offensive writing belonged to Marlowe, but Marlowe was later released without punishment. Since the accepted penalty for heresy was death, Marlowe’s apparent pardon further fueled rumors that he was secretly a government spy. Marlowe was killed just days later, on May 30, 1593, when he was allegedly stabbed to death by Ingram Frizer, a wealthy businessman with ties to the English government and Queen Elizabeth I. The circumstances and events surrounding Marlowe’s death are largely unknown, and Frizer was ultimately pardoned on the grounds of self-defense. Marlowe was buried in an unmarked grave near St. Nicolas Church in London, but a memorial window sits in Poets’ Corner in Westminster Abbey as a tribute to Marlowe and his contribution to literature and the stage.
Get the entire The Jew of Malta LitChart as a printable PDF.
"My students can't get enough of your charts and their results have gone through the roof." -Graham S.
Download 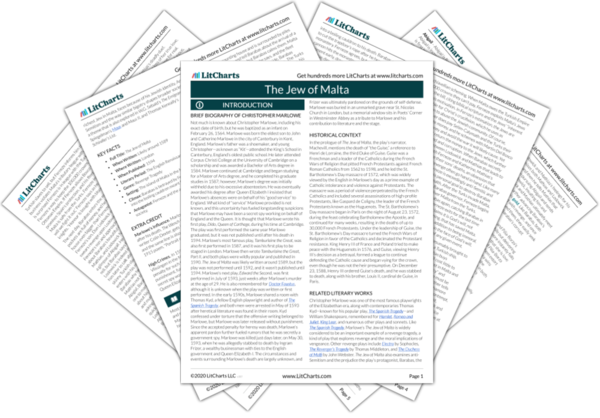 Historical Context of The Jew of Malta

In the prologue of The Jew of Malta, the play’s narrator, Machevill, mentions the death of “the Guise,” a reference to Henri de Lorraine, the third Duke of Guise. Guise was a Frenchman and a leader of the Catholics during the French Wars of Religion that pitted French Protestants against French Roman Catholics from 1562 to 1598, and he led the St. Bartholomew’s Day massacre of 1572, which was widely viewed by the English in Marlowe’s day as a prime example of Catholic intolerance and violence against Protestants. The massacre was a period of violence perpetrated by the French Catholics and included several assassinations of high-profile Protestants, like Gaspard de Coligny, the leader of the French Protestants known as the Huguenots. The St. Bartholomew’s Day massacre began in Paris on the night of August 23, 1572, during the feast celebrating Bartholomew the Apostle, and continued for many weeks, resulting in the deaths of up to 30,000 French Protestants. Under the leadership of Guise, the St. Bartholomew’s Day massacre turned the French Wars of Religion in favor of the Catholics and decimated the Protestant resistance. King Henry III of France and Poland tried to make peace with the Huguenots in 1576, and Guise, viewing Henry III’s decision as a betrayal, formed a league to continue defending the Catholic cause and began vying for the crown, even though he was not the heir presumptive. On December 23, 1588, Henry III ordered Guise’s death, and he was stabbed to death, along with his brother, Louis II, cardinal de Guise, in Paris.

Other Books Related to The Jew of Malta

Christopher Marlowe was one of the most famous playwrights of the Elizabethan era, along with contemporaries Thomas Kyd—known for his popular play, The Spanish Tragedy—and William Shakespeare, remembered for Hamlet, Romeo and Juliet, King Lear, and numerous other plays and sonnets. Like The Spanish Tragedy, Marlowe’s The Jew of Malta is widely considered to be an important example of a revenge tragedy, a kind of play that explores revenge and the moral implications of vengeance. Other revenge plays include Electra by Sophocles, The Revenger’s Tragedy by Thomas Middleton, and The Duchess of Malfi by John Webster. The Jew of Malta also examines anti-Semitism and the prejudice the play’s protagonist, Barabas, the richest Jew in Malta, faces because of his Jewish identity. Anti-Semitism and the way similar bigotry shapes broader society is a theme that is also explored in W.G. Sebald’s The Emigrants, Art Spiegelman’s Maus and Maus II, and Thomas Keneally’s Schindler’s List.
Key Facts about The Jew of Malta

Extra Credit for The Jew of Malta

Marlowe’s Influence. Marlowe’s influence has remained long after his death. The Wench is Dead, a 1989 novel by English writer Colin Dexter, gets its title from a line in The Jew of Malta, and the same line is also quoted in T.S. Eliot’s prologue to his 1915 poem, “Portrait of a Lady.”

High Crimes. In 1592, Marlowe was arrested in the city of Vlissingen in the Netherlands for counterfeiting coins. The penalty for such fraud was death, but Marlowe again escaped punishment, further fueling conspiracy theories that he was a secret spy working on behalf of the English government and Queen Elizabeth I. 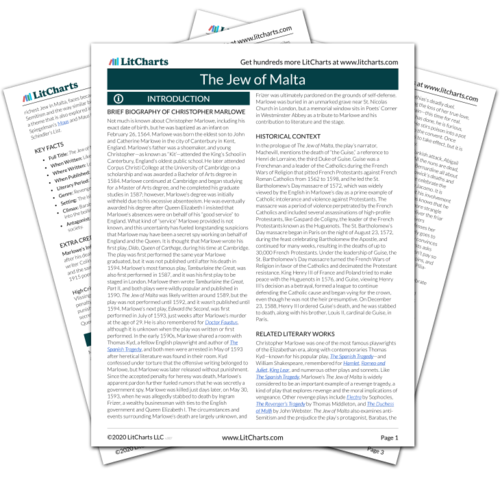 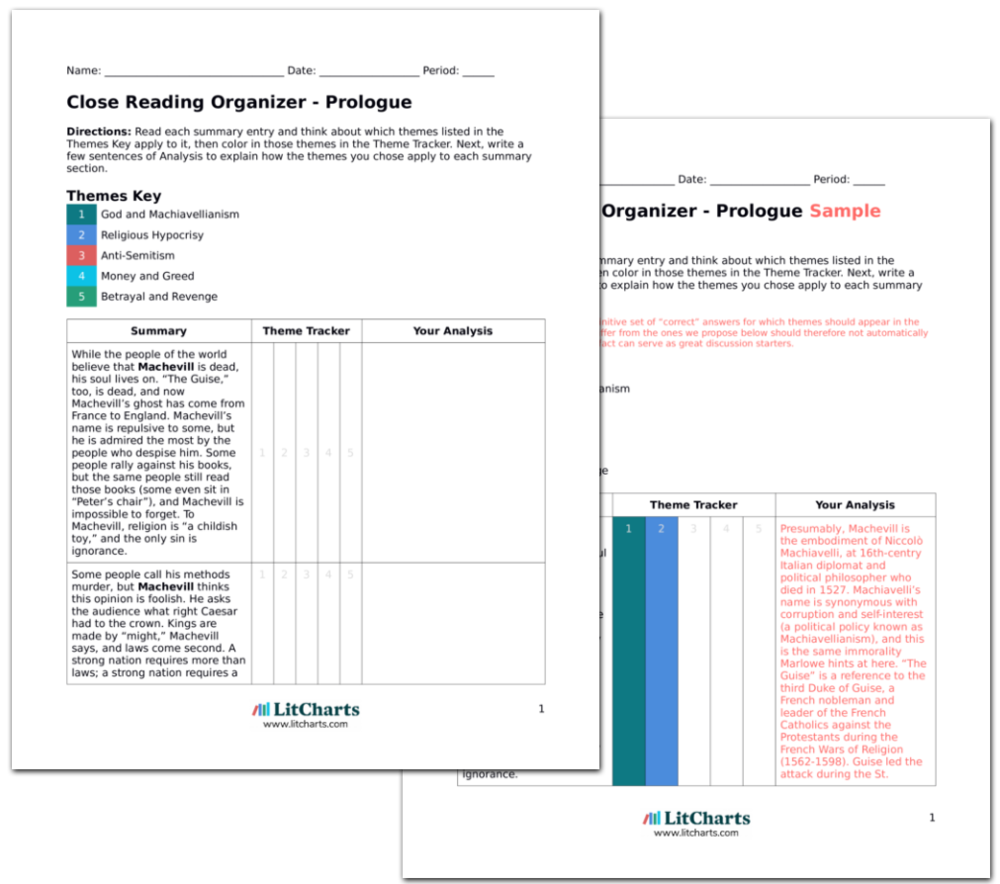