Download this LitChart! (PDF)
Teachers and parents! Struggling with distance learning? Our Teacher Edition on The Lesson can help.

“The Lesson” takes place in New York City in the mid-20th century and centers on a group of Black children from Harlem and their self-appointed teacher, Miss Moore, who is also Black. One of the kids, a girl named Sylvia, is particularly frustrated with Miss Moore, whom she finds patronizing and annoying.

Miss Moore is a Black woman who’s college-educated and wants to teach the kids about issues that affect them (like poverty), but Sylvia and the other children pay much attention to her lessons. Sylvia and her friend Sugar especially resent Miss Moore’s college education and hate her “nappy” hair, “proper speech,” and formal clothes The adults in the neighborhood similarly talk about Miss Moore behind her back, though they always make the kids dress up and attend her lessons.

One day, Miss Moore decides to take the kids on a trip to FAO Schwarz, an extravagant toy store in a much more affluent part of the city. Miss Moore gives Sylvia a few dollars to pay for the taxi fare and tells her to calculate a 10-percent tip. But Sylvia isn’t able to do the calculation in her head, so when they arrive, she doesn’t tip the driver and pockets the extra money.

When the group reaches Fifth Avenue in Manhattan, they ogle at the extravagantly dressed white people on the streets, whom Sylvia thinks are “crazy.” At FAO Schwarz, the children begin to look through the windows at the toys on display. They’re astonished by both the high price tags and the items themselves: Big Butt wishes he could afford a $300 telescope, and all of the children are shocked by a $480 paperweight. The kids are particularly fascinated by a toy sailboat that costs $1,195, and they wonder why any parents would ever spend that much money on a toy when it would be so fragile, and they could just make their own toy boat for cheaper.

Eventually, Miss Moore suggests that they go into the store. Sylvia and Sugar lead the way, but both of them feel suddenly anxious and ashamed as they get to the front door. Sylvia remembers feeling the same way when she and Sugar snuck into a Catholic Church—they were going to pull a prank on the parishioners, but Sylvia couldn’t go through with it. Another one of the kids, Mercedes, marches confidently into the store, pushing past Sylvia and Sugar. The kids are too nervous to touch any of the incredibly expensive toys until Sugar decides to reach out and run her hand along the sailboat they had seen through the window. For some reason, this action upsets Sylvia, who goes to Miss Moore and asks why she brought them to the store. Miss Moore doesn’t answer and instead asks if Sylvia is upset about something. Sylvia just tells Miss Moore that she thinks they should leave.

On the way home, Sylvia thinks over the experience. She imagines how the money that wealthy people are spending on toys could help her family buy basic necessities and wonders how people exist who have enough money to spend on luxuries like the toys at the store. She remembers Miss Moore’s lessons about inequality and injustice, which makes her angry again.

When the group gets back to Harlem, Miss Moore asks the kids what they’ve learned. To Sylvia’s surprise, Sugar volunteers and expresses her own frustration with the economic inequality she has seen. Sylvia is annoyed and tries to step on Sugar’s feet to get her to stop talking, but Sugar moves away from Sylvia and continues. Miss Moore asks if anyone else has anything to say, making a point of looking at Sylvia, but Sylvia just walks away. Sugar catches up with her to ask if she wants to get ice cream with the money from the taxi fare, but Sylvia decides that she needs to take some time to think about everything that happened that day. She lets Sugar run ahead and decides that she isn’t going to let anyone beat her. 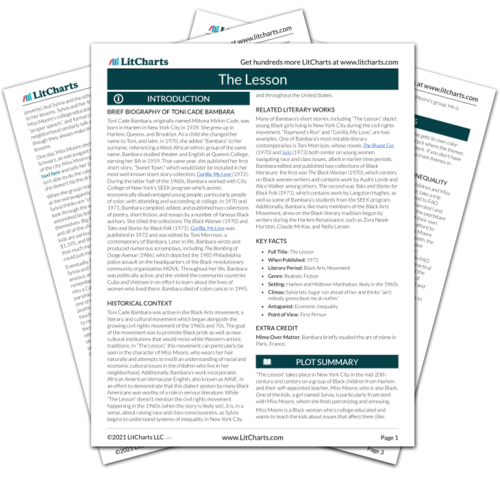 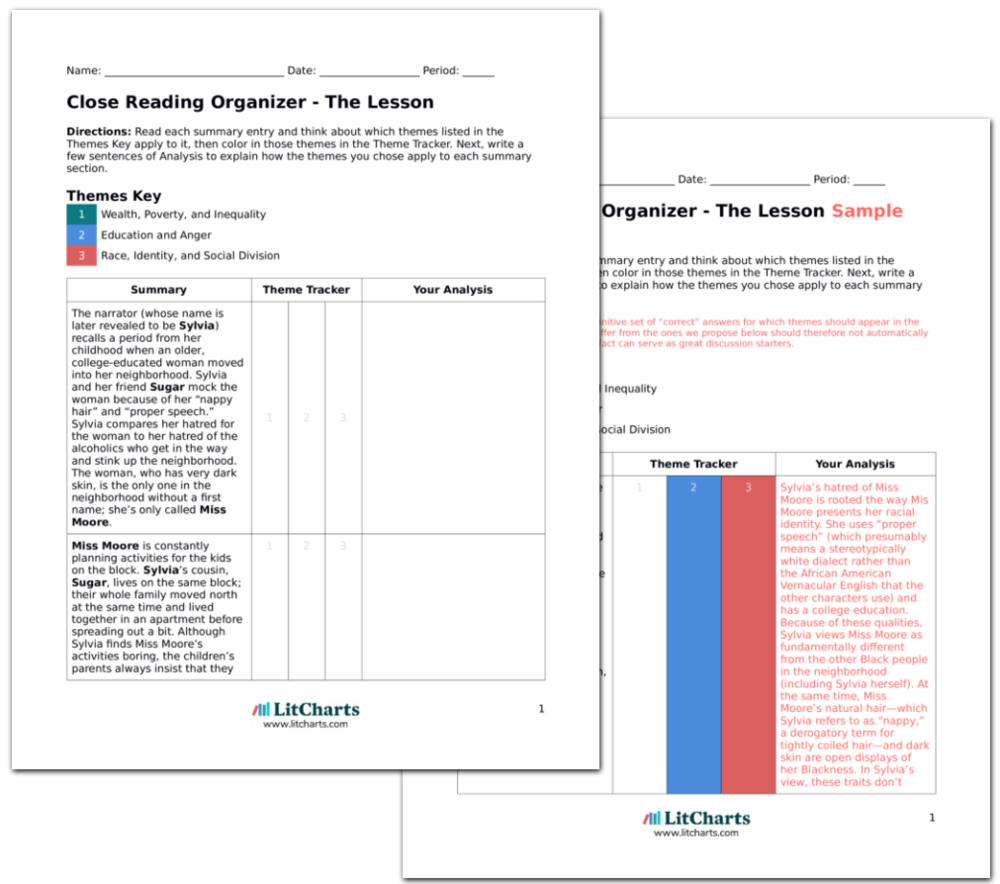