Download this LitChart! (PDF)
Teachers and parents! Struggling with distance learning? Our Teacher Edition on The Lumber Room can help.

Welcome to the LitCharts study guide on Saki's The Lumber Room. Created by the original team behind SparkNotes, LitCharts are the world's best literature guides.

A concise biography of Saki plus historical and literary context for The Lumber Room.

A quick-reference summary: The Lumber Room on a single page.

In-depth summary and analysis of every of The Lumber Room. Visual theme-tracking, too.

Explanations, analysis, and visualizations of The Lumber Room's themes.

The Lumber Room's important quotes, sortable by theme, character, or .

Description, analysis, and timelines for The Lumber Room's characters.

Explanations of The Lumber Room's symbols, and tracking of where they appear.

An interactive data visualization of The Lumber Room's plot and themes.

The Scottish writer Hector Hugh Munro, or H. H. Munro, is best known by his pen name, Saki. Munro was born in 1870 in Burma (now Myanmar), where his father was a military police officer. When Munro was two year old, his mother died, and he and his sisters were sent to England to live with their grandmother and aunts, who were very strict with the children. Later, Munro went on to satirize authoritarian adults in his fiction and also criticize the stilted social mores of Edwardian (or early 20th-century) England. While he began his career as a political journalist, Munro established himself as a successful author and is best known for his witty short stories. In November 1916, he was killed in action in World War I.
Get the entire The Lumber Room LitChart as a printable PDF.
"My students can't get enough of your charts and their results have gone through the roof." -Graham S.
Download 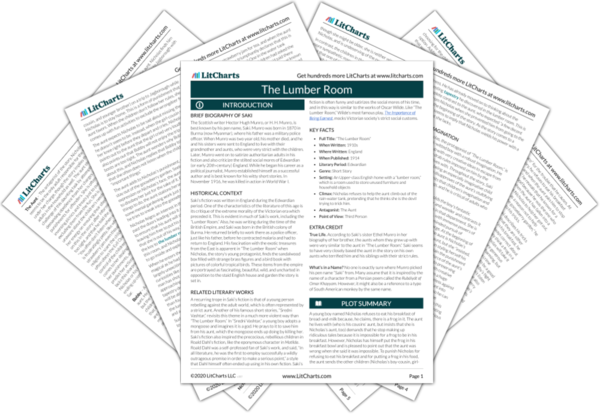 Historical Context of The Lumber Room

Saki’s fiction was written in England during the Edwardian period. One of the characteristics of the literature of this age is its critique of the extreme morality of the Victorian era which preceded it. This is evident in much of Saki’s work, including the “Lumber Room.” Also, he was writing during the time of the British Empire, and Saki was born in the British colony of Burma. He returned briefly to work there as a police officer, just like his father, before he contracted malaria and had to return to England. His fascination with the exotic treasures from the East is apparent in “The Lumber Room” when Nicholas, the story’s young protagonist, finds the sandalwood box filled with strange brass figures and a bird book with pictures of colorful tropical birds. These items from the empire are portrayed as fascinating, beautiful, wild, and uncharted in opposition to the staid English house and garden the story is set in.

Other Books Related to The Lumber Room

A recurring trope in Saki’s fiction is that of a young person rebelling against the adult world, which is often represented by a strict aunt. Another of his famous short stories, “Sredni Vashtar,” revisits this theme in a much more violent way than “The Lumber Room.” In “Sredni Vashtar,” a young boy adopts a mongoose and imagines it is a god. He prays to it to save him from his aunt, which the mongoose ends up doing by killing her. Saki’s fiction also inspired the precocious, rebellious children in Roald Dahl’s fiction, like the eponymous character in Matilda. Roald Dahl was a self-professed fan of Saki’s work, and said, “In all literature, he was the first to employ successfully a wildly outrageous premise in order to make a serious point,” a style that Dahl himself often ended up using in his own fiction. Saki’s fiction is often funny and satirizes the social mores of his time, and in this way is similar to the works of Oscar Wilde. Like “The Lumber Room,” Wilde’s most famous play, The Importance of Being Earnest, mocks Victorian society’s strict social customs.
Key Facts about The Lumber Room

Extra Credit for The Lumber Room

True Life. According to Saki’s sister Ethel Munro in her biography of her brother, the aunts whom they grew up with were very similar to the aunt in “The Lumber Room.” Saki seems to have very closely based the aunt in the story on his own aunts who terrified him and his siblings with their strict rules.

What’s in a Name? No one is exactly sure where Munro picked his pen name “Saki” from. Many assume that it is inspired by the name of a character from a Persian poem called the Rubáiyát of Omar Khayyam. However, it might also be a reference to a type of South American monkey by the same name. 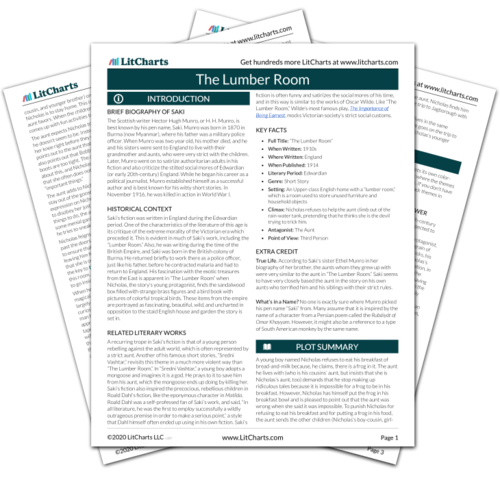 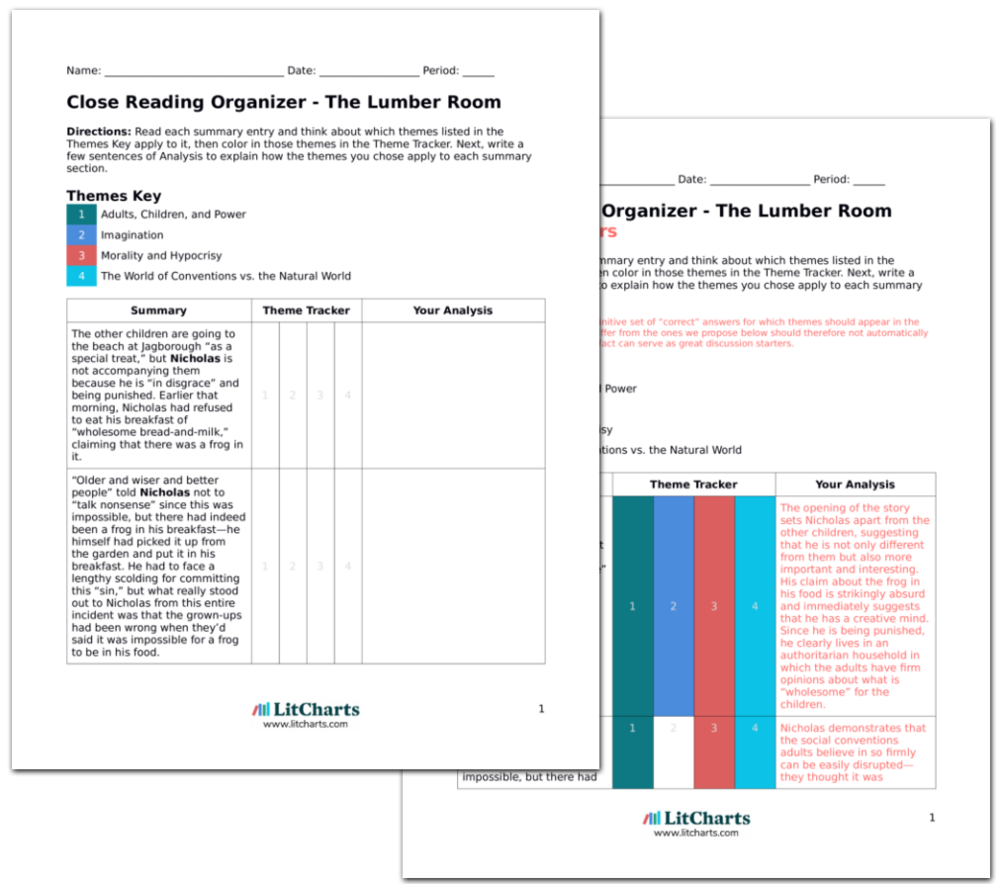