Welcome to the LitCharts study guide on Roald Dahl's Matilda. Created by the original team behind SparkNotes, LitCharts are the world's best literature guides.

A concise biography of Roald Dahl plus historical and literary context for Matilda.

A quick-reference summary: Matilda on a single page.

In-depth summary and analysis of every chapter of Matilda. Visual theme-tracking, too.

Explanations of Matilda's symbols, and tracking of where they appear.

An interactive data visualization of Matilda's plot and themes.

Dahl was born in Cardiff, Wales in 1916 to Norwegian immigrant parents. When he was still very young, Dahl’s sister and father died within weeks of each other. Rather than return to Norway to live near family, Dahl’s mother remained in Wales so her children could be educated in English schools. However, Dahl’s school days were unpleasant for him—he hated the hazing rituals and prevalence of corporal punishment. Following school, Dahl worked for Shell Oil until World War II, in which Dahl served as a fighter pilot. In 1940, Dahl was seriously injured in a crash landing that temporarily robbed him of his sight. He flew again and served briefly as a flight instructor after his recovery, and then he became a diplomat in Washington, D.C. During his time in the U.S., Dahl published his first story, anecdotes about his time as a pilot. Throughout the 1940s and 50s, Dahl published a number of short stories for adults as well as The Gremlins, his first book for children. 1961’s James and the Giant Peach catapulted him to fame and became the first of his many successful children’s novels. Dahl was married twice, first to actress Patricia Neal and then to Felicity Dahl. He had five children with Neal. In his lifetime, Dahl was a fierce advocate for immunization—his daughter died of measles in 1962—and posthumously, Felicity Dahl created Roald Dahl’s Marvelous Children’s Charity to support sick children. His novels have sold millions of copies and remain immensely popular. Dahl is often considered one of the most influential British authors of the late 20th century.
Get the entire Matilda LitChart as a printable PDF.
"My students can't get enough of your charts and their results have gone through the roof." -Graham S.
Download 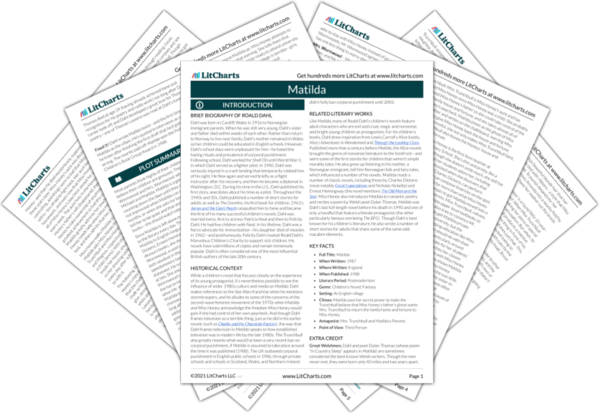 While a children’s novel that focuses closely on the experience of its young protagonist, it’s nevertheless possible to see the influence of wider 1980s culture and media on Matilda. Dahl makes references to the Star Wars franchise when he mentions stormtroopers, and he alludes to some of the concerns of the second-wave feminist movement of the 1970s when Matilda and Miss Honey acknowledge the freedom Miss Honey would gain if she had control of her own paycheck. And though Dahl frames television as a terrible thing, just as he did in his earlier novels (such as Charlie and the Chocolate Factory), the way that Dahl frames television in Matilda speaks to how established television was in modern life by the late 1980s. The Trunchbull also greatly resents what would’ve been a very recent ban on corporal punishment, if Matilda is assumed to take place around the time it was published (1988). The UK outlawed corporal punishment in English public schools in 1986, through private schools and schools in Scotland, Wales, and Northern Ireland didn’t fully ban corporal punishment until 2003.

Other Books Related to Matilda

Like Matilda, many of Roald Dahl’s children’s novels feature adult characters who are evil and cruel, magic and nonsense, and bright young children as protagonists. For his children’s books, Dahl drew inspiration from Lewis Carroll’s Alice books, Alice’s Adventures in Wonderland and Through the Looking-Glass. Published more than a century before Matilda, the Alice novels brought the genre of nonsense literature to the forefront—and were some of the first stories for children that weren’t simple morality tales. He also grew up listening to his mother, a Norwegian immigrant, tell him Norwegian folk and fairy tales, which influenced a number of his novels. Matilda reads a number of classic novels, including those by Charles Dickens (most notably Great Expectations and Nicholas Nickelby) and Ernest Hemingway (the novel mentions The Old Man and the Sea). Miss Honey also introduces Matilda to romantic poetry and recites a poem by Welsh poet Dylan Thomas. Matilda was Dahl’s last full-length novel before his death in 1990 and one of only a handful that feature a female protagonist (the other particularly famous one being The BFG). Though Dahl is best known for his children’s literature, he also wrote a number of short stories for adults that share some of the same odd, macabre elements.
Key Facts about Matilda

Great Welshmen. Dahl and poet Dylan Thomas (whose poem “In Country Sleep” appears in Matilda) are sometimes considered the best-known Welsh writers. Though the men never met, they were born only 40 miles and two years apart. Thomas died at age 39 (having already achieved fame and recognition for his poetry and radio work) not long after Dahl’s career took off, and Dahl developed a great love for Thomas’s poetry—one of Thomas’s poems was read at Dahl’s funeral.

Fixed It! Dahl wrote Matilda twice—and the first time, he wrote Matilda as the villain. He’s quoted in interviews as saying that he knew after finishing the first draft that he’d gotten Matilda wrong. The rewrite paid off: Matilda won the Federation of Children’s Book Group Award in 1988. 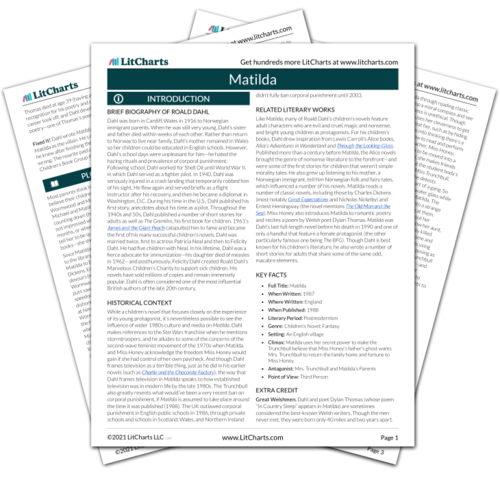 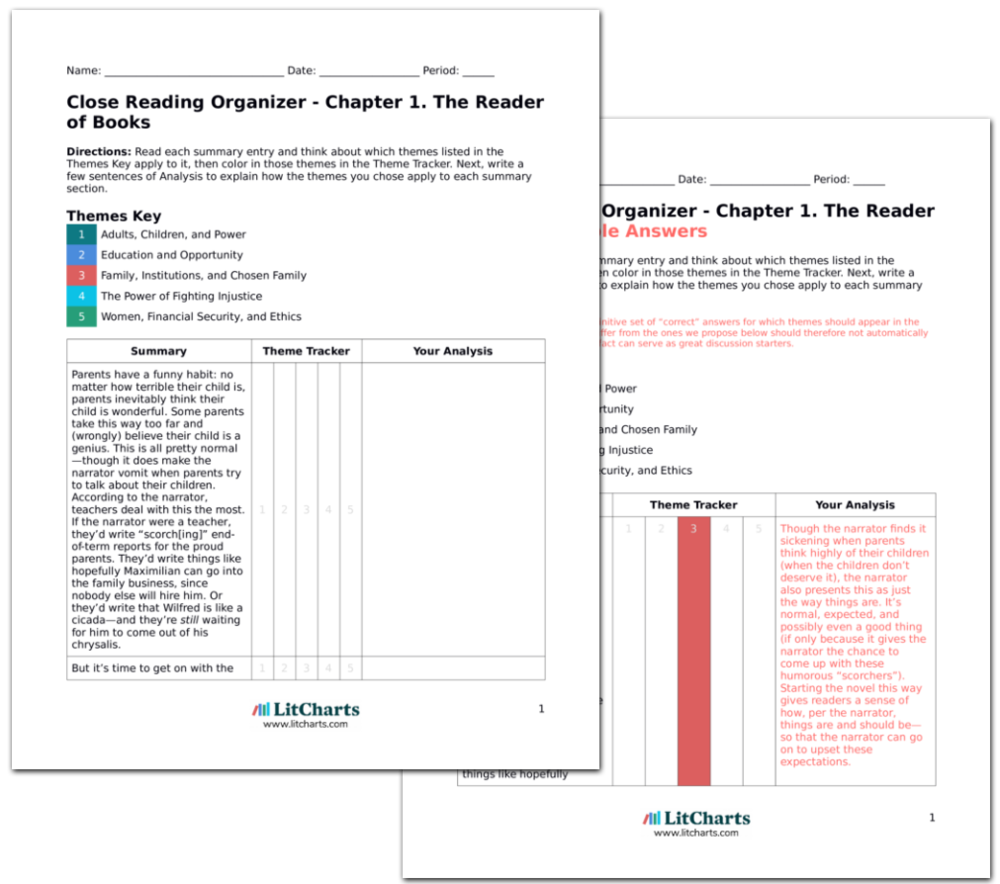