The Man of the Crowd
Introduction + Context
Plot Summary
Detailed Summary & Analysis
The Man of the Crowd
Themes
All Themes Dark Secrets Curiosity, Obsession, and the Unknown London, Crowds, and Urban Alienation
Quotes
Characters
All Characters The Narrator The Old Man
Symbols
All Symbols The Diamond or the Dagger

Download this LitChart! (PDF)
Teachers and parents! Struggling with distance learning? Our Teacher Edition on The Man of the Crowd can help.

Welcome to the LitCharts study guide on Edgar Allan Poe's The Man of the Crowd. Created by the original team behind SparkNotes, LitCharts are the world's best literature guides.

The Man of the Crowd: Introduction

A concise biography of Edgar Allan Poe plus historical and literary context for The Man of the Crowd.

The Man of the Crowd: Plot Summary

A quick-reference summary: The Man of the Crowd on a single page.

The Man of the Crowd: Detailed Summary & Analysis

In-depth summary and analysis of every of The Man of the Crowd. Visual theme-tracking, too.

The Man of the Crowd: Themes

Explanations, analysis, and visualizations of The Man of the Crowd's themes.

The Man of the Crowd: Quotes

The Man of the Crowd's important quotes, sortable by theme, character, or .

The Man of the Crowd: Characters

Description, analysis, and timelines for The Man of the Crowd's characters.

The Man of the Crowd: Symbols

Explanations of The Man of the Crowd's symbols, and tracking of where they appear.

The Man of the Crowd: Theme Wheel

An interactive data visualization of The Man of the Crowd's plot and themes.

Edgar Poe was born the second child of two actors in Boston, Massachusetts. Shortly after his father left the family, his mother passed away. Poe was no more than two years old at the time. He was unofficially adopted and renamed Edgar Allan by Frances and John Allan in Richmond, Virginia. After spending a year at the University of Virginia and briefly serving in the military, he began to focus entirely on his writing, which encompassed prose, poetry, and literary criticism. He wrote and edited for several literary journals throughout the United States at various points in his life, but he always struggled with alcoholism and persistent financial issues brought about by debts, low salaries, and an economic depression. In spite of these setbacks, Poe strove to make a living from his passion, writing iconic tales such as The Raven, and producing a massive body of work despite his troubles. He knew that his audience would react more strongly to macabre and shocking stories, and these darker themes were often inspired by his own personal tragedies. Poe published Ulalume, a poem about his grief, in 1848, the year after his first wife Virginia died from tuberculosis. Poe himself died of unknown causes the following year, leaving behind a lasting legacy that has inspired writers of Gothic literature across the world.
Get the entire The Man of the Crowd LitChart as a printable PDF.
"My students can't get enough of your charts and their results have gone through the roof." -Graham S.
Download 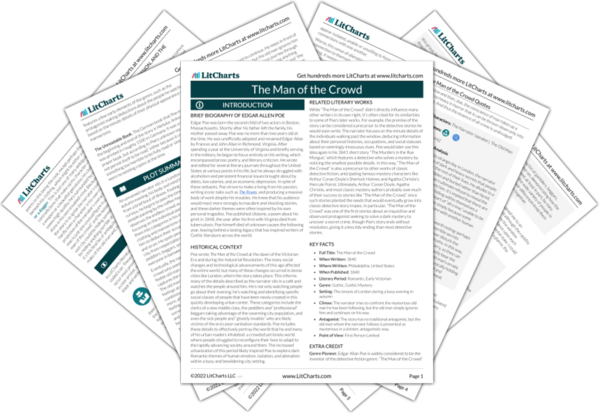 Historical Context of The Man of the Crowd

Poe wrote The Man of the Crowd at the dawn of the Victorian Era and during the Industrial Revolution. The many social changes and technological advancements of this age affected the entire world, but many of these changes occurred in dense cities like London, where the story takes place. This informs many of the details described as the narrator sits in a café and watches the people around him. He’s not only watching people go about their evening; he’s watching and identifying specific social classes of people that have been newly created in this quickly developing urban center. These categories include the clerks of a new middle class, the peddlers and “professional” beggars taking advantage of the swarming city population, and even the sick people and “ghastly invalids” who are likely victims of the era’s poor sanitation standards. Poe includes these details to effectively portray the world that he and many of his urban readers inhabited: a crowded yet lonely world where people struggled to reconfigure their lives to adapt to the rapidly advancing society around them. The increased urbanization of this period likely inspired Poe to explore dark Romantic themes of human emotion, isolation, and alienation within a busy and bewildering city setting.

Other Books Related to The Man of the Crowd

While “The Man of the Crowd” didn’t directly influence many other writers in its own right, it’s often cited for its similarities to some of Poe’s later works. For example, the premise of the story can be considered a precursor to the detective stories he would soon write. The narrator focuses on the minute details of the individuals walking past the window, deducing information about their personal histories, occupations, and social statuses based on seemingly innocuous clues. Poe would later use this idea again in his 1841 short story “The Murders in the Rue Morgue,” which features a detective who solves a mystery by noticing the smallest possible details. In this way, “The Man of the Crowd” is also a precursor to other works of classic detective fiction, anticipating famous mystery characters like Arthur Conan Doyle’s Sherlock Holmes and Agatha Christie’s Hercule Poirot. Ultimately, Arthur Conan Doyle, Agatha Christie, and most classic mystery authors probably owe much of their success to stories like “The Man of the Crowd,” since such stories planted the seeds that would eventually grow into classic detective story tropes. In particular, “The Man of the Crowd” was one of the first stories about an inquisitive and observant protagonist seeking to solve a dark mystery to uncover a secret crime, though Poe’s story ends without resolution, giving it a less tidy ending than most detective stories.
Key Facts about The Man of the Crowd

Extra Credit for The Man of the Crowd

Genre Pioneer. Edgar Allan Poe is widely considered to be the inventor of the detective fiction genre. “The Man of the Crowd” features a few early elements of the genre, such as the protagonist making deductions about the people he watches based on the minute details of their physical appearance and mannerisms.

The Unreadable Book. The German book that Poe mentions at the beginning and end of the story is Hortulus Animae, which was printed in roughly 1500 in Germany. It was a once-popular prayer book, but according to Poe’s unknown source, it “does not permit itself to be read,” either because it contained something too horrible to be fully read or simply because there were no existing copies at the time. 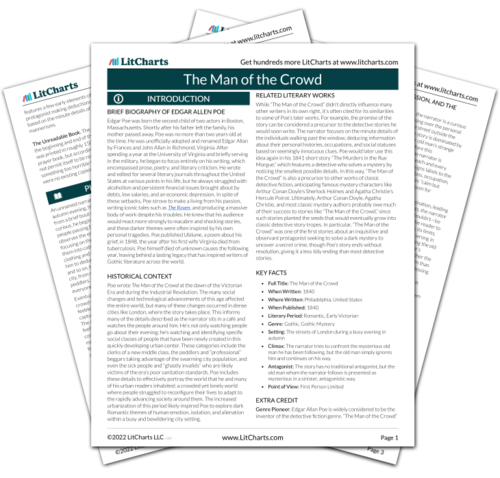 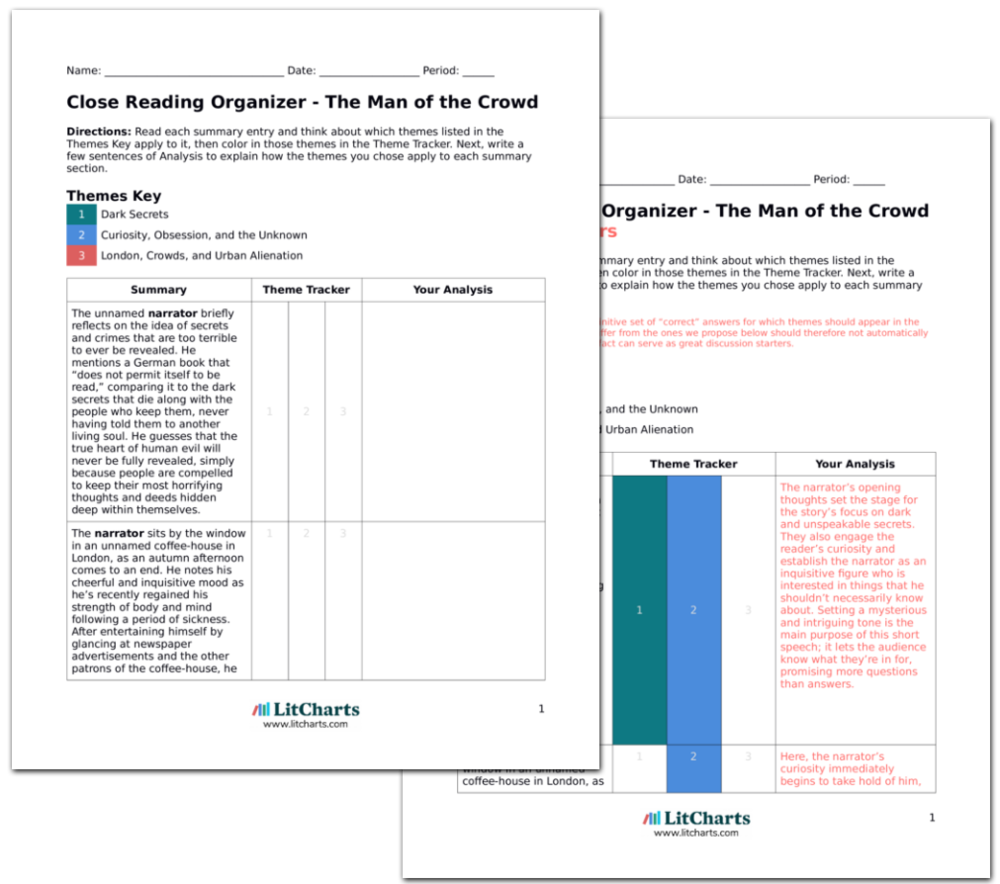