Download this LitChart! (PDF)
Teachers and parents! Struggling with distance learning? Our Teacher Edition on The Pedestrian can help.

Welcome to the LitCharts study guide on Ray Bradbury's The Pedestrian. Created by the original team behind SparkNotes, LitCharts are the world's best literature guides.

A concise biography of Ray Bradbury plus historical and literary context for The Pedestrian.

A quick-reference summary: The Pedestrian on a single page.

In-depth summary and analysis of every of The Pedestrian. Visual theme-tracking, too.

Explanations, analysis, and visualizations of The Pedestrian's themes.

The Pedestrian's important quotes, sortable by theme, character, or .

Description, analysis, and timelines for The Pedestrian's characters.

Explanations of The Pedestrian's symbols, and tracking of where they appear.

An interactive data visualization of The Pedestrian's plot and themes.

From his earliest years, Ray Bradbury was inspired by the intrusion of fantasy into everyday life. As a child, he avidly read horror stories, collected early science fiction magazines, and attended magic shows. High school marked the end of his formal education, but by that time, Bradbury had already established himself as a talented short story writer. In the prolific years to come, Bradbury wrote celebrated novels including Fahrenheit 451 as well as hundreds of short stories, some of which were collected in The Martian Chronicles in 1950 and The Illustrated Man in 1951. Though many of his works include futuristic settings and imagined technologies, Bradbury resisted categorization as a “science fiction” writer—he maintained that his works were more like myths about human nature than speculative fiction. Indeed, many of his short stories use fantastic settings or futuristic technology as tools for exploring timeless themes like nostalgia, censorship, or anxiety about the future. When he died at 91, Bradbury was regarded as one of the most prominent science fiction writers of his time.
Get the entire The Pedestrian LitChart as a printable PDF.
"My students can't get enough of your charts and their results have gone through the roof." -Graham S.
Download 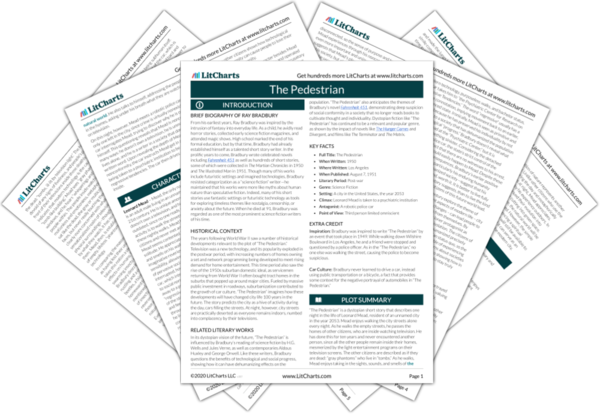 Historical Context of The Pedestrian

The years following World War II saw a number of historical developments relevant to the plot of “The Pedestrian.” Television was a new technology, and its popularity exploded in the postwar period, with increasing numbers of homes owning a set and network programming being developed to meet rising demand for home entertainment. This time period also saw the rise of the 1950s suburban domestic ideal, as servicemen returning from World War II often bought tract homes in the suburbs that popped up around major cities. Fueled by massive public investment in roadways, suburbanization contributed to the growth of car culture. “The Pedestrian” imagines how these developments will have changed city life 100 years in the future. The story predicts the city as a hive of activity during the day, cars filling the streets. At night, however, city streets are practically deserted as everyone remains indoors, numbed into complacency by their televisions.

Other Books Related to The Pedestrian

In its dystopian vision of the future, “The Pedestrian” is influenced by Bradbury’s reading of science fiction by H.G. Wells and Jules Verne, as well as contemporaries Aldous Huxley and George Orwell. Like these writers, Bradbury questions the benefits of technological and social progress, showing how it can have dehumanizing effects on the population. “The Pedestrian” also anticipates the themes of Bradbury’s novel Fahrenheit 451, demonstrating deep suspicion of social conformity in a society that no longer reads books to cultivate thought and individuality. Dystopian fiction like “The Pedestrian” has continued to be a relevant and popular genre, as shown by the impact of novels like The Hunger Games and Divergent, and films like The Terminator and The Matrix.
Key Facts about The Pedestrian

Extra Credit for The Pedestrian

Inspiration: Bradbury was inspired to write “The Pedestrian” by an event that took place in 1949. While walking down Wilshire Boulevard in Los Angeles, he and a friend were stopped and questioned by a police officer. As in the “The Pedestrian,” no one else was walking the street, causing the police to become suspicious.

Car Culture: Bradbury never learned to drive a car, instead using public transportation or a bicycle, a fact that provides some context for the negative portrayal of automobiles in “The Pedestrian.” 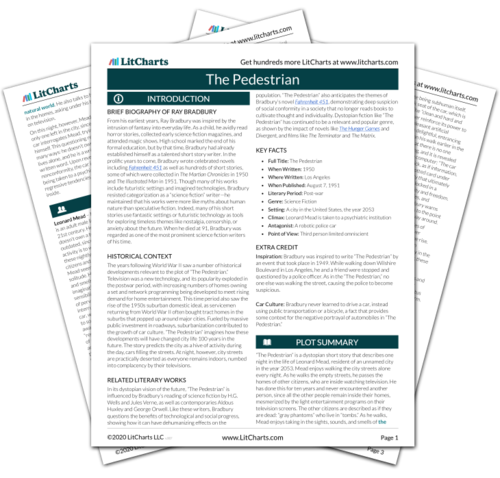 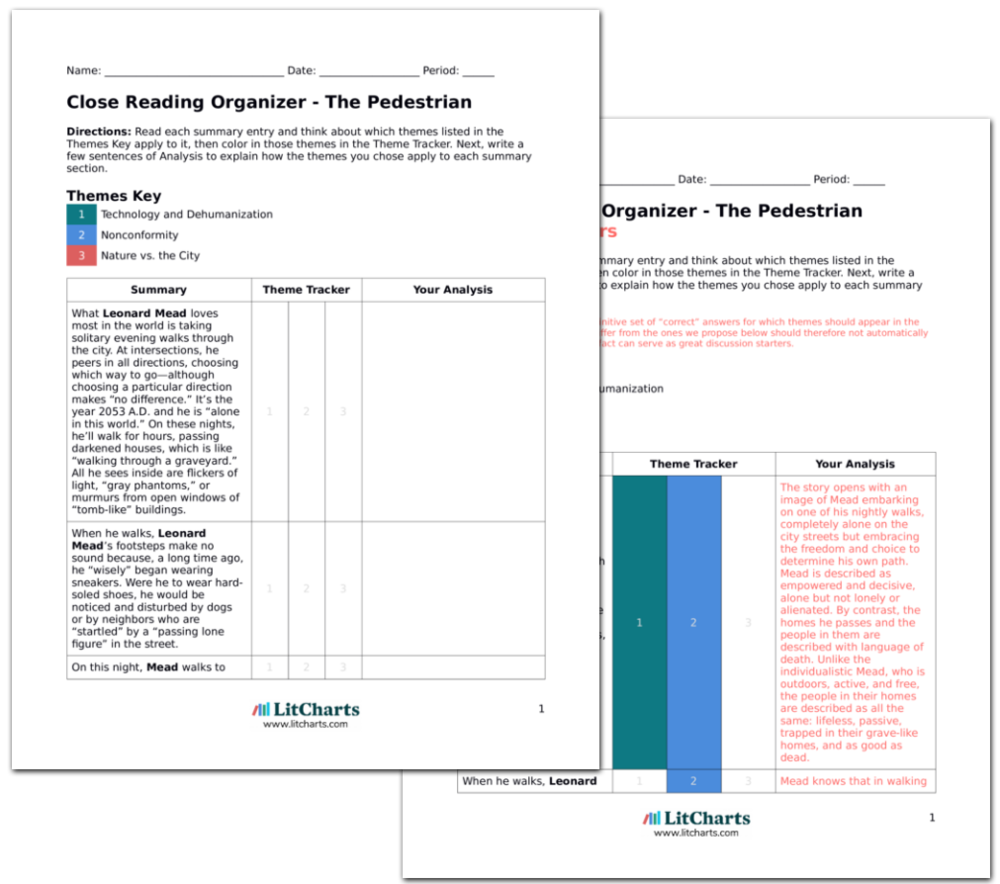