Download this LitChart! (PDF)
Teachers and parents! Struggling with distance learning? Our Teacher Edition on The Perfect Storm can help.

Welcome to the LitCharts study guide on Sebastian Junger's The Perfect Storm. Created by the original team behind SparkNotes, LitCharts are the world's best literature guides.

A concise biography of Sebastian Junger plus historical and literary context for The Perfect Storm.

A quick-reference summary: The Perfect Storm on a single page.

In-depth summary and analysis of every chapter of The Perfect Storm. Visual theme-tracking, too.

Explanations, analysis, and visualizations of The Perfect Storm's themes.

Description, analysis, and timelines for The Perfect Storm's characters.

Description, analysis, and timelines for The Perfect Storm's terms.

Explanations of The Perfect Storm's symbols, and tracking of where they appear.

An interactive data visualization of The Perfect Storm's plot and themes.

Sebastian Junger is the son of a painter and a physicist—the latter, his father, having emigrated from Dresden, Germany, during World War II. Junger received his B.A. degree in cultural anthropology from Wesleyan University. An interest in dangerous jobs prompted him to research commercial fishing, which led to his bestselling The Perfect Storm. Junger has contributed articles to publications such as Vanity Fair, and he also won a major broadcasting award for a piece on the United States’s war in Afghanistan for ABC’s Nightline in 2008. His documentary Restrepo, which is meant to give soldiers’ perspective on life in the deadly Korengal Valley, was nominated for an Academy Award, and the related, award-winning book War (2010) focuses on the U.S. Army platoon alongside whom Junger spent a year gathering research. His other books include A Death in Belmont, which speculates on the identity of the 1960s Boston Strangler, and Tribe (2016), which looks at the assimilation of veterans back into society after combat. Junger is married and, in 2016, became a father at 55 when his daughter was born.
Get the entire The Perfect Storm LitChart as a printable PDF.
"My students can't get enough of your charts and their results have gone through the roof." -Graham S.
Download 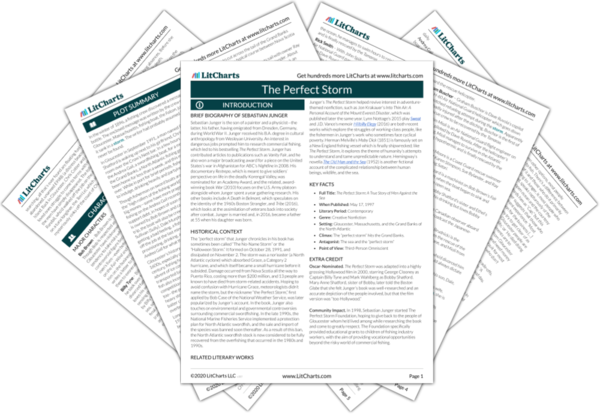 Historical Context of The Perfect Storm

The “perfect storm” that Junger chronicles in his book has sometimes been called “The No-Name Storm” or the “Halloween Storm.” It formed on October 28, 1991, and dissipated on November 2. The storm was a nor’easter (a North Atlantic cyclone) which absorbed Grace, a Category 2 hurricane, and which itself became a small hurricane before it subsided. Damage occurred from Nova Scotia all the way to Puerto Rico, costing more than $200 million, and 13 people are known to have died from storm-related accidents. Hoping to avoid confusion with Hurricane Grace, meteorologists didn’t name the storm, but the nickname “the Perfect Storm,” first applied by Bob Case of the National Weather Service, was later popularized by Junger’s account. In the book, Junger also touches on environmental and governmental controversies surrounding commercial swordfishing. In the late 1990s, the National Marine Fisheries Service implemented a protection plan for North Atlantic swordfish, and the sale and import of the species was banned soon thereafter. As a result of this ban, the North Atlantic swordfish stock is now considered to be fully recovered from the overfishing that occurred in the 1980s and 1990s.

Other Books Related to The Perfect Storm

Junger’s The Perfect Storm helped revive interest in adventure-themed nonfiction, such as Jon Krakauer’s Into Thin Air: A Personal Account of the Mount Everest Disaster, which was published later the same year. Lynn Nottage’s 2015 play Sweat and J.D. Vance’s memoir Hillbilly Elegy (2016) are both recent works which explore the struggles of working-class people, like the fishermen in Junger’s work who sometimes face cyclical poverty. Herman Melville’s Moby Dick (1851) is famously set on a New England fishing vessel which is finally shipwrecked; like The Perfect Storm, it explores the theme of humanity’s attempts to understand and tame unpredictable nature. Hemingway’s novella The Old Man and the Sea (1952) is another fictional account of the complicated relationship between human beings, wildlife, and the sea.
Key Facts about The Perfect Storm

Extra Credit for The Perfect Storm

Oscar-Nominated. The Perfect Storm was adapted into a highly grossing Hollywood film in 2000, starring George Clooney as Captain Billy Tyne and Mark Wahlberg as Bobby Shatford. Mary Anne Shatford, sister of Bobby, later told the Boston Globe that she felt Junger’s book was well-researched and an accurate depiction of the people involved, but that the film version was “too Hollywood.”

Community Impact. In 1998, Sebastian Junger started The Perfect Storm Foundation, hoping to give back to the people of Gloucester whom he’d lived among while researching the book and come to greatly respect. The Foundation specifically provided educational grants to children of fishing industry workers, with the aim of providing vocational opportunities beyond the risky world of commercial fishing. 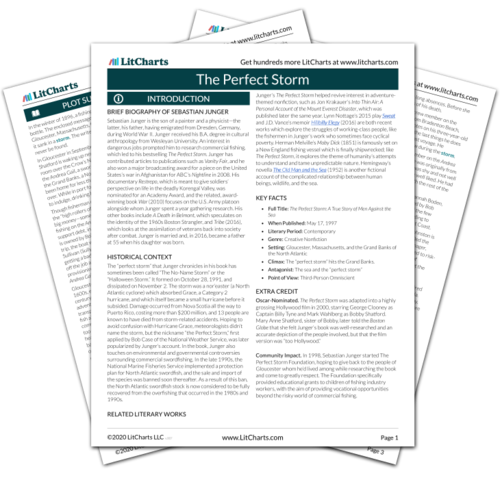 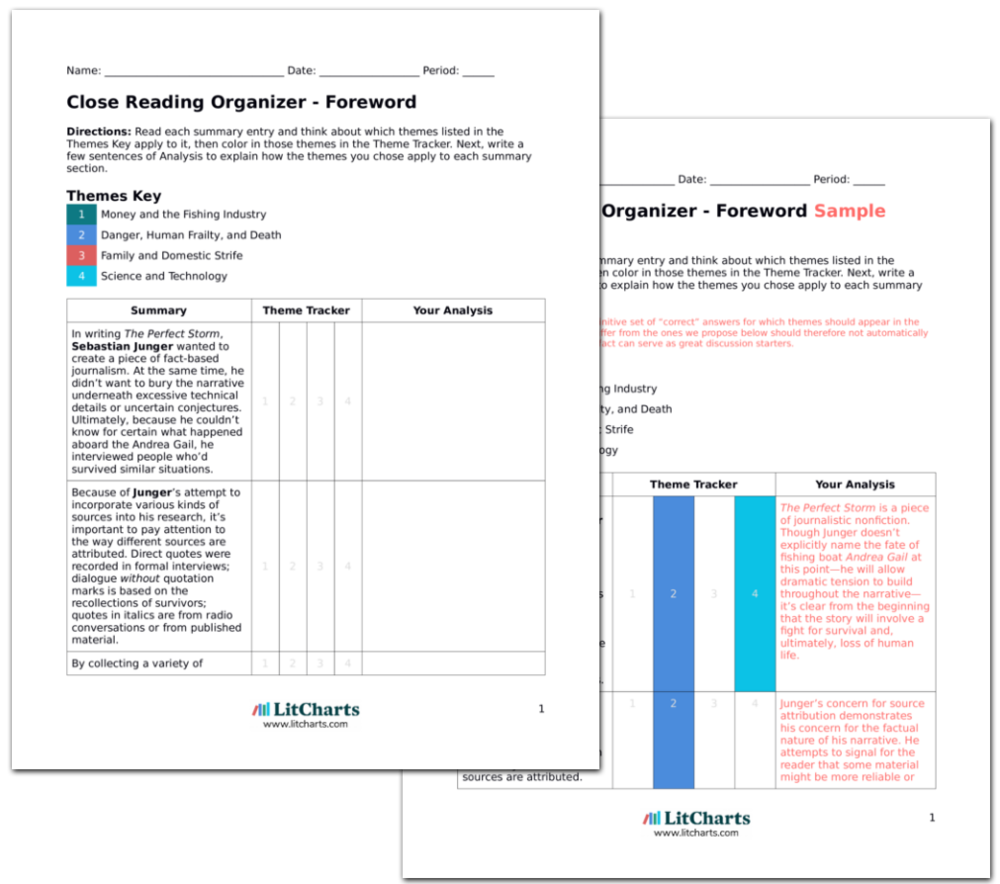