Download this LitChart! (PDF)
Teachers and parents! Struggling with distance learning? Our Teacher Edition on The Power can help.

Welcome to the LitCharts study guide on Naomi Alderman's The Power. Created by the original team behind SparkNotes, LitCharts are the world's best literature guides.

A concise biography of Naomi Alderman plus historical and literary context for The Power.

A quick-reference summary: The Power on a single page.

In-depth summary and analysis of every chapter of The Power. Visual theme-tracking, too.

Explanations, analysis, and visualizations of The Power's themes.

The Power's important quotes, sortable by theme, character, or chapter.

Description, analysis, and timelines for The Power's characters.

Explanations of The Power's symbols, and tracking of where they appear.

An interactive data visualization of The Power's plot and themes.

Alderman was born and raised in London in an Orthodox Jewish community. She was educated at South Hampstead High School and Oxford University. She then found her way into children’s publishing before working as an editor for a law firm’s publications. Alderman went on to study creative writing at the University of East Anglia before becoming a novelist. She was also a lead writer for an alternate reality game from 2004 to 2007. In 2006, she made her literary debut with the novel Disobedience. She published her second novel, The Lessons, in 2010, and her third, The Liar’s Gospel, in 2012. Also in 2012, Alderman was selected to be mentored by Margaret Atwood through an arts initiative, resulting in her fourth novel, The Power, which was published in 2016. Alderman writes a monthly technology column for The Guardian and has received a number of literary accolades, including the Baileys Women’s Prize for Fiction and the Orange Award for New Writers.
Get the entire The Power LitChart as a printable PDF.
"My students can't get enough of your charts and their results have gone through the roof." -Graham S.
Download 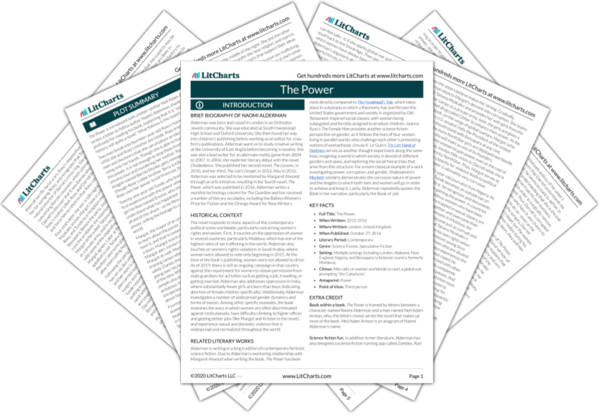 Historical Context of The Power

The novel responds to many aspects of the contemporary political scene worldwide, particularly concerning women’s rights and sexism. First, it touches on the oppression of women in several countries, particularly Moldova, which has one of the highest rates of sex trafficking in the world. Alderman also touches on women’s rights violations in Saudi Arabia, where women were allowed to vote only beginning in 2015. At the time of the book’s publishing, women were not allowed to drive. As of 2019, there is still an ongoing campaign in that country against the requirement for women to obtain permission from male guardians for activities such as getting a job, travelling, or getting married. Alderman also addresses oppression in India, where substantially fewer girls are born than boys (indicating abortion of female children specifically). Additionally, Alderman investigates a number of widespread gender dynamics and forms of sexism. Among other specific examples, the book examines the ways in which women are often discriminated against institutionally, have difficulty climbing to higher offices and getting better jobs (like Margot and Kristen in the novel), and experience sexual and domestic violence that is widespread and normalized throughout the world.

Other Books Related to The Power

Alderman is writing in a long tradition of contemporary feminist science fiction. Due to Alderman’s mentoring relationship with Margaret Atwood when writing the book, The Power has been most directly compared to The Handmaid’s Tale, which takes place in a dystopia in which a theonomy has overthrown the United States government and society is organized by Old Testament-inspired social classes, with women being subjugated and forcibly assigned to produce children. Joanna Russ’s The Female Man provides another science fiction perspective on gender, as it follows the lives of four women living in parallel worlds who challenge each other’s preexisting notions of womanhood. Ursula K. Le Guin’s The Left Hand of Darkness serves as another thought experiment along the same lines, imagining a world in which society is devoid of different genders and sexes, and exploring the social hierarchies that arise from this structure. For a more classical example of a work investigating power, corruption, and gender, Shakespeare’s Macbeth similarly demonstrates the corrosive nature of power and the lengths to which both men and women will go in order to achieve and keep it. Lastly, Alderman repeatedly quotes the Bible in her narrative, particularly the Book of Job.
Key Facts about The Power

Extra Credit for The Power 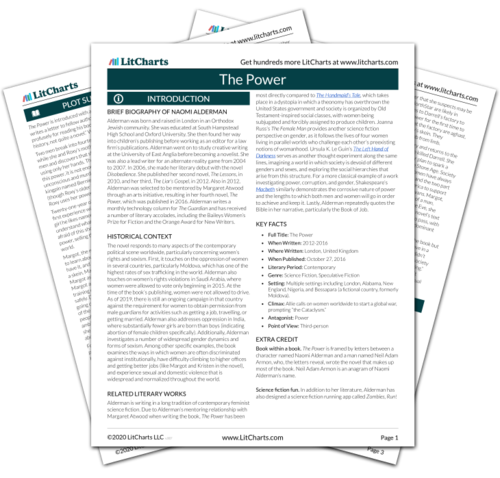 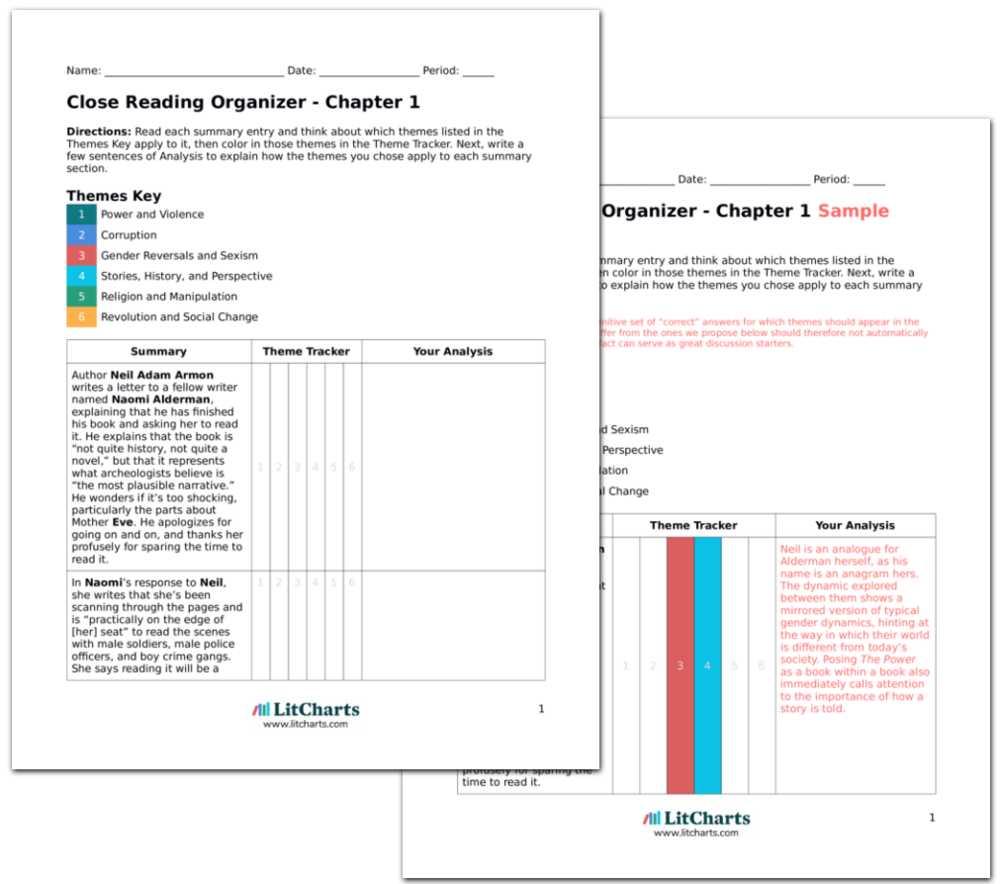