Download this LitChart! (PDF)
Teachers and parents! Struggling with distance learning? Our Teacher Edition on The Prince and the Pauper can help.

Welcome to the LitCharts study guide on Mark Twain's The Prince and the Pauper. Created by the original team behind SparkNotes, LitCharts are the world's best literature guides.

The Prince and the Pauper: Introduction

A concise biography of Mark Twain plus historical and literary context for The Prince and the Pauper.

The Prince and the Pauper: Plot Summary

A quick-reference summary: The Prince and the Pauper on a single page.

The Prince and the Pauper: Detailed Summary & Analysis

In-depth summary and analysis of every chapter of The Prince and the Pauper. Visual theme-tracking, too.

The Prince and the Pauper: Themes

Explanations, analysis, and visualizations of The Prince and the Pauper's themes.

The Prince and the Pauper: Quotes

The Prince and the Pauper's important quotes, sortable by theme, character, or chapter.

The Prince and the Pauper: Characters

Description, analysis, and timelines for The Prince and the Pauper's characters.

The Prince and the Pauper: Symbols

Explanations of The Prince and the Pauper's symbols, and tracking of where they appear.

The Prince and the Pauper: Theme Wheel

An interactive data visualization of The Prince and the Pauper's plot and themes.

Samuel Clemens was the sixth of seven children born to Jane and John Marshall Clemens. Unfortunately, only three of Clemens’s siblings survived to adulthood. The Clemens family moved from Florida, Missouri to Hannibal, Missouri when Clemens was four years old. Clemens loved his home near the Mississippi River—later, his childhood in Hannibal would be the inspiration for The Adventures of Tom Sawyer and The Adventures of Huckleberry Finn. Tragedy struck in 1847 when John Clemens died, leaving Jane and their children to struggle to make enough money. Clemens left school after the fifth grade to work as a typesetter and it was at this time that he began submitting articles and sketches to the newspapers. The articles were a success, and Clemens went on to write for major publications in Philadelphia, St. Louis, and Cincinnati. As much as he loved writing, Clemens dreamed of being a steamboat pilot on the Mississippi River and successfully earned his license with the help of another pilot named Horace E. Bixby. When the Civil War broke out in 1861, Clemens briefly joined the Confederacy but quickly changed his mind and moved to Nevada to work for his other brother. Clemens traveled around the American West, working as a miner and gathering inspiration for his fiction. In 1865, Twain published a story called “The Celebrated Jumping Frog of Calaveras County.” The story was an instant success and opened up new doors to Clemens: a local newspaper paid for him to take a tour of Europe, which inspired his book Innocents Abroad (1869) and led him to meet his future wife, Olivia Langdon. After Clemens and Oliva married, they moved to Hartford, Connecticut where Olivia introduced Clemens to abolitionists like Harriet Beecher Stowe and Frederick Douglass. During the 17 years Clemens lived in Hartford, he wrote some of his most notable works, including Tom Sawyer, Huckleberry Finn, and The Prince and the Pauper. The couple had four children, but their only son died before his second birthday. Between 1896 and 1909, Olivia and two of their remaining children died, leaving Clemens in a deep state of depression. In 1907 Clemens was awarded an Honorary Doctorate in Letters from Oxford University and he continued to enjoy immense popularity among American readers. In 1909, however, Clemens predicted he’d die when Halley’s Comet reached its nearest approach to Earth (coincidentally, he was born immediately after the comet’s last sighting close to earth in 1835). Sure enough, the day after the comet made its nearest approach to Earth in 1910, Clemens died of a heart attack. He was buried with his wife and children in Elmira, New York.
Get the entire The Prince and the Pauper LitChart as a printable PDF.
"My students can't get enough of your charts and their results have gone through the roof." -Graham S.
Download 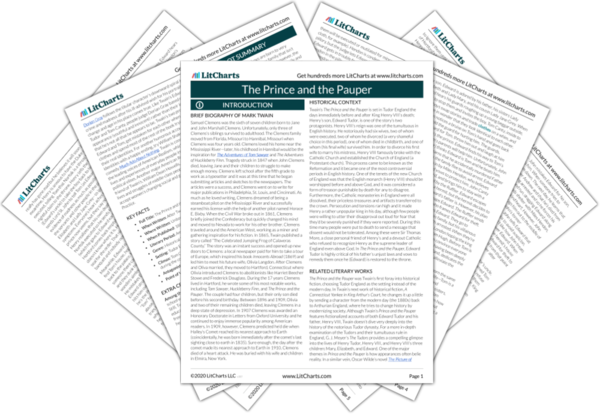 Historical Context of The Prince and the Pauper

Twain’s The Prince and the Pauper is set in Tudor England the days immediately before and after King Henry VIII’s death; Henry’s son, Edward Tudor, is one of the story’s two protagonists. Henry VIII’s reign was one of the tumultuous in English history. He notoriously had six wives, two of whom were executed, two of whom he divorced (a very shameful choice in this period), one of whom died in childbirth, and one of whom (his final wife) survived him. In order to divorce his first wife to marry his mistress, Henry VIII famously broke with the Catholic Church and established the Church of England (a Protestant church). This process came to be known as the Reformation and it became one of the most controversial periods in English history. One of the tenets of the new Church of England was that the English monarch (Henry VIII) should be worshipped before and above God, and it was considered a form of treason punishable by death for any to disagree. Furthermore, the Catholic monasteries in England were all dissolved, their priceless treasures and artifacts transferred to the crown. Persecution and tensions ran high and it made Henry a rather unpopular king in his day, although few people were willing to utter their disapproval out loud for fear that they’d be severely punished if they were reported. During this time many people were put to death to send a message that dissent would not be tolerated. Among these were Sir Thomas More, a close personal friend of Henry’s and a devout Catholic who refused to recognize Henry as the supreme leader of England even above God. In The Prince and the Pauper, Edward Tudor is highly critical of his father’s unjust laws and vows to remedy them once he (Edward) is restored to the throne.

Other Books Related to The Prince and the Pauper

The Prince and the Pauper was Twain’s first foray into historical fiction, choosing Tudor England as the setting instead of the modern day. In Twain’s next work of historical fiction, A Connecticut Yankee in King Arthur’s Court, he changes it up a little by sending a character from the modern day (the 1880s) back to Arthurian England, where he tries to change history by modernizing society. Although Twain’s Prince and the Pauper features fictionalized accounts of both Edward Tudor and his father, Henry VIII, Twain doesn’t dive very deeply into the history of the notorious Tudor dynasty. For a more in-depth examination of the Tudors and their tumultuous rule in England, G. J. Meyer’s The Tudors provides a compelling glimpse into the lives of Henry Tudor, Henry VIII, and Henry VIII’s three children: Mary, Elizabeth, and Edward. One of the major themes in Prince and the Pauper is how appearances often belie reality. In a similar vein, Oscar Wilde’s novel The Picture of Dorian Gray follows the titular character’s downward spiral into crime and madness after his ill-advised wish for his portrait to change and age in his place comes true. Like Twain’s Edward Tudor and Tom Canty, people judge Dorian Gray based on his appearance (youthful and innocent) rather than their instincts that he’s not all that he appears to be. Twain’s two protagonists, Edward and Tom, get mistaken for each other when they switch clothes and spend most of the rest of the book trying to prove their real identities. For another humorous account of mistaken identities with a happy ending, try William Shakespeare’s comedy Much Ado About Nothing. Twain is considered one of the leading voices of American Realism, which focused on the lives and experiences of everyday people instead of social or political elites. Another major American Realist and a close friend of Twain’s, William Dean Howells, faithfully portrays the lives and struggles of middle-class people as they struggle to accept women’s changing social and gender roles in Dr. Breen’s Practice.
Key Facts about The Prince and the Pauper

Extra Credit for The Prince and the Pauper

Among the Stacks. Mark Twain dropped out of a traditional school when he was just 11 years old after finishing fifth grade. Still, Twain loved learning, so he spent as much time as he could educating himself in public libraries, where he enjoyed the freedom to follow his interests and learn more about them than he would have in a traditional school.

Namesake. Samuel Clemens famously loved steamboats and he spent a few years as a steamboat pilot on the Mississippi River. In fact, his love of steamboats and experience piloting them helped him decide on his most famous pen name, Mark Twain. Steamboats required that water be at least two fathoms deep to proceed safely, so on every steamboat there was a man who would use an instrument to determine the river’s depth. When it reached two meters, the man would call out, “by the mark twain!” 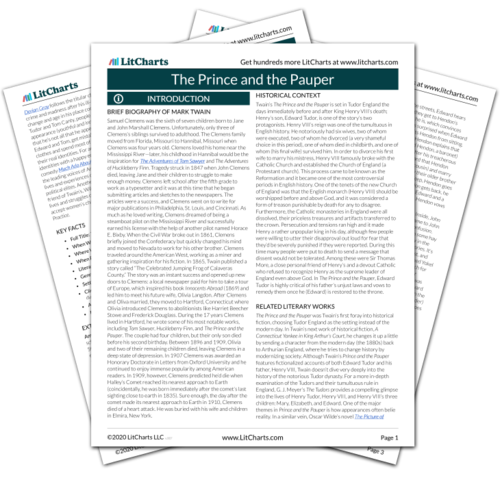 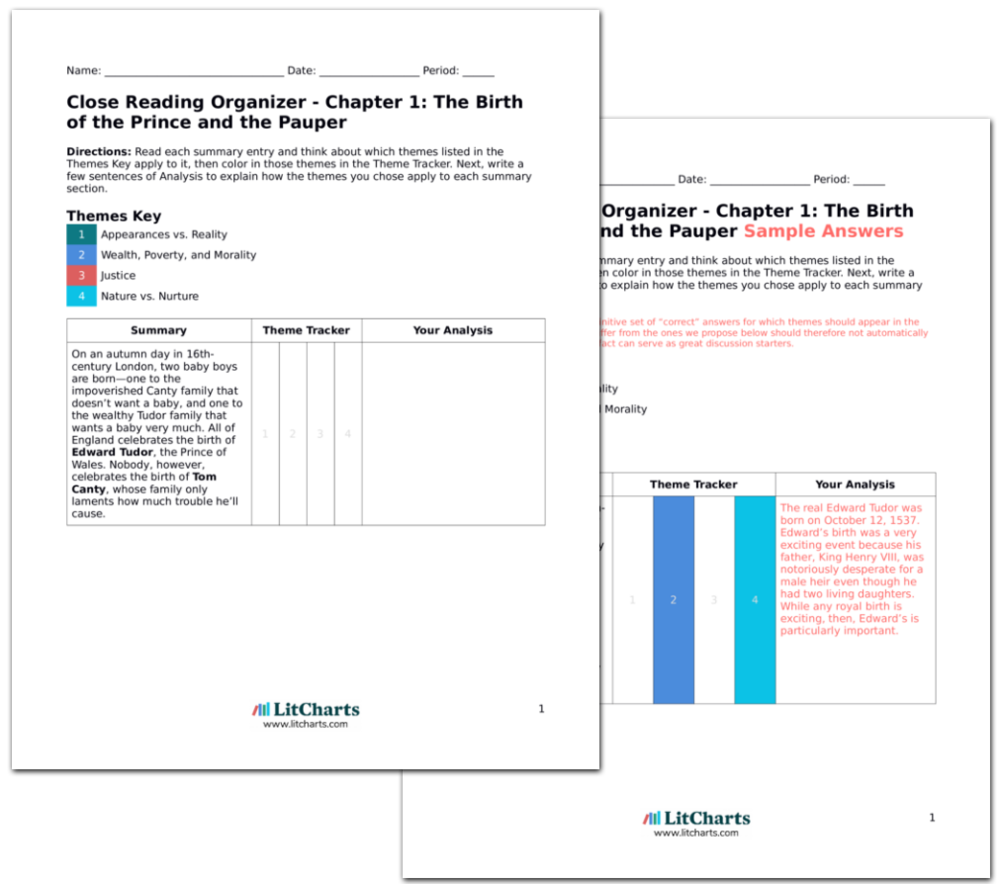