Download this LitChart! (PDF)
Teachers and parents! Struggling with distance learning? Our Teacher Edition on The Story of My Life can help.

Helen Keller was born on June 27th, 1880 in Tuscumbia, a small town in Northern Alabama. Helen’s paternal lineage can be traced back to Switzerland, where one of her ancestors, ironically, was the first teacher of deaf children in Zurich. The beginning of Helen’s life was ordinary but joyful—she lived with her parents in a small house on a large familial estate, and was a happy and intrepid child. When she was nearly two years old, however, she was struck with a sickness which gave her a high fever and which her parents and her doctor all feared she would not survive. Helen’s fever eventually broke, but the illness left her blind, dumb, and deaf.

In the months after Helen’s illness, she clung tightly to her mother, and the two of them developed a few crude signs by which Helen could communicate her wants and needs. Despite Helen’s impairment, she still understood a lot of what was happening around her, and could complete small tasks, play games with her dog and the daughter of the family cook, and even get into mischief and danger, once nearly knocking her baby sister Mildred from the crib where she slept.

As Helen grew, so did her desire to express herself. Without any language at all, Helen often succumbed to fits of frustration and rage, and Helen’s parents—far from any school for the deaf or the blind and afraid that no tutors would come to their small Alabama town—feared that their daughter would never be educated. After a trip to an oculist in Baltimore, the Kellers were referred to Dr. Alexander Graham Bell, famed inventor of the telephone and advocate for deaf and blind children. Dr. Bell told the Kellers to write to Mr. Anagnos, the director of the Perkins Institution for the Blind in Boston, and they did so. Within weeks, they received a letter back telling them that a teacher had been found, and the following March, Helen’s teacher arrived.

Miss Anne Mansfield Sullivan’s arrival in Tuscumbia marked a new chapter in young Helen’s life. Helen and Miss Sullivan had an instant connection, and with Miss Sullivan’s constant, patient care, Helen began to understand and acquire language through finger-spelling the alphabet. Helen’s world was changed, and she found herself excited for the future for the first time in her life. Miss Sullivan instilled a love of the natural world in Helen, and though Helen came to realize that nature is as dangerous as it is beautiful, her love of plants, trees, flowers, and animals was deep and abiding.

Soon after Helen acquired language and tools of communication, she learned how to read in braille. Helen’s lessons in reading and in sign language were informal, and often conducted outdoors. Helen continued to learn in and through nature, and credits Miss Sullivan’s “loving touch” with awakening her to the pleasures and comforts of learning, nature, self-expression, and kindness.

In May of 1888, Helen began her education in Boston at the Perkins Institution for the Blind. She delighted in being around other children and classmates who were so much like her. Helen took trips to the seaside during summer vacation, and discovered her love of the water. In the fall, Helen and Miss Sullivan returned to Alabama for a stay at the Keller’s country home, Fern Quarry, where they shared exciting and perilous adventures in the mountainous countryside with Helen’s little sister Mildred.

In the spring of 1890, Helen heard the story of a deaf and blind Norwegian girl who had been taught to speak out loud. Helen had been yearning for a more articulate way of expressing herself, and decided to undertake lessons to learn how to speak with Miss Sarah Fuller at the Horace Mann School in New York. As Helen progressed in her speech lessons, she felt her soul come awake in a new way, and was delighted to return home to Alabama and share her new gift with her adoring family.

In the winter of 1892, Helen experienced a major setback in her creative life. She composed a story called “The Frost King,” inspired by Miss Sullivan’s vivid descriptions of the changing fall foliage at Fern Quarry. Helen sent the story to Mr. Anagnos as a birthday gift, and Anagnos was so pleased and impressed that he published the story in a Perkins Institution newsletter. Soon after the story’s publication, however, it was discovered that “The Frost King” bore striking similarities to a well-known children’s story called “The Frost Fairies,” published years before Helen was even born. Helen was ashamed, astonished, and embarrassed, though she realized that her plagiarism was inadvertent. She must have had the story read to her by Miss Sullivan at a young age, and had its details stamped upon the surface of her memory, as when she was still learning language she retained everything read to her in sharp detail. Mr. Anagnos, convinced that Helen had willfully plagiarized the story, forced her to appear before a “court” of teachers and administrators at the Perkins Institution. Although Helen was ultimately found innocent, the ordeal changed Helen’s relationship to the written word and caused her to second-guess herself in all of her compositions for a long while. Ultimately, though, Helen concludes that the incident did serve to teach her to think deeply about the problems and methods of composition, and the ways in which young writers must wade through the temptations toward assimilation and reproduction of others’ words and ideas in order to find their own true voices.

In 1893, Helen attended the inauguration of President Cleveland, visited Niagara Falls, and accompanied Dr. Alexander Graham Bell to the World’s Fair. The year was one of excitement and awakening for Helen, as she also began more regular lessons in the histories of Greece and Rome, French grammar, and Latin. In the summer of 1894, Helen began studies at the Wright-Humason School for the Deaf in New York City, where she fell in love with German literature and enjoyed a happy two years in the city. At the end of her time in New York, however, Helen’s father died, causing her, her mother, and her sister deep sorrow.

In October of 1896, Helen, determined to one day gain admission to Radcliffe (the women’s college at Harvard University) enrolled as a student at the Cambridge School for Young Ladies. Helen knew that there would be challenges and obstacles, but wanted very badly to be admitted to Radcliffe alongside her seeing and hearing peers. Helen’s teachers at this new school had no experience with teaching deaf or blind children, and Helen was almost entirely reliant on Miss Sullivan to interpret for her what her teachers in each class were saying. Helen’s course load was heavy, though, and on top of her rigorous studies there was a lot of extra work for Helen to do, like copying her lessons into braille and ordering specially-embossed braille textbooks from London and Philadelphia. Despite these challenges, Helen progressed well in school, and enjoyed the friendships she made with her new classmates. After Christmas that year, Mildred also enrolled at the school, and so Helen enjoyed many happy months studying, working, and playing alongside her beloved sister. Helen completed her preliminary examinations and passed with flying colors, and as she headed into her second year of school, she was determined to continue her unflagging success. Helen’s second year, however, featured a course load more heavily focused on mathematics—Helen’s greatest weakness in school since she began lessons with Miss Sullivan long ago. Helen was determined to keep up, but the principal of the school believed that Helen was falling behind, and refused to let her take her final examinations with the rest of her class. Helen’s mother withdrew both her and Mildred from the school, and Helen began studying with an independent tutor, splitting her time between Boston and Wrentham, Massachusetts. In June of 1899, it was time for Helen to take her final exams for entrance to Radcliffe. The college authorities barred Miss Sullivan from sitting during Helen with her exams and interpreting for her, but despite the unfamiliarity of her designated proctor and the difficulty of the mathematics exam, Helen passed her exams and gained admission to Radcliffe.

After one more year of preparation with a private tutor, Helen began school at Radcliffe, excited to finally fulfill her lifelong dream of attending college. Helen soon discovered, however, that college was not the “romantic lyceum” or utopia she’d dreamed it would be. It was difficult for Helen to keep up without careful attention to her “peculiar” needs. By her third year of college—the time in which Helen is composing this story of her life—Helen is taking classes which deeply interest her, and has come to learn that the way she was educated in the earlier part of her life—leisurely but hungrily, with an open mind and heart and a desire not just to memorize facts but to truly come to understand the history of the human race, the delicate nature of the natural world, and the integrity and beauty of the written world—was the best education for her all along.

Helen dedicates an entire chapter to expressing her love of books, and the indebtedness she feels to the stories which have brought her joy, comfort, and companionship throughout her life. Literature is her Utopia, she writes, and when she is reading, she does not feel disabled or barred from the human experience in any way—she has learned love and charity from books, and is grateful to writers like Shakespeare, Goethe, Moliére, Hawthorne, and Hugo for all they have taught her.

Helen doesn’t want her readers to think, however, that books are her only amusement. She takes great pleasure in physical activity and the natural world, and enjoys sailing, rowing, and canoeing. As much as she has come to love college, she treasures her escapes to the countryside in Wrentham, where she can get away from the dirt, grime, and speed of the city and find peace in beloved nature. Helen also enjoys taking in art and museums, attending the theater, and seeing the world through the eyes of others.

Helen gives thanks to her many friends, who have enriched her life beyond measure. She is grateful for her friends both famous and obscure, as well as those friends whom she has never met but with whom she has corresponded. Other people have made her life what it is, and have “turned [her] limitations into beautiful privileges.” 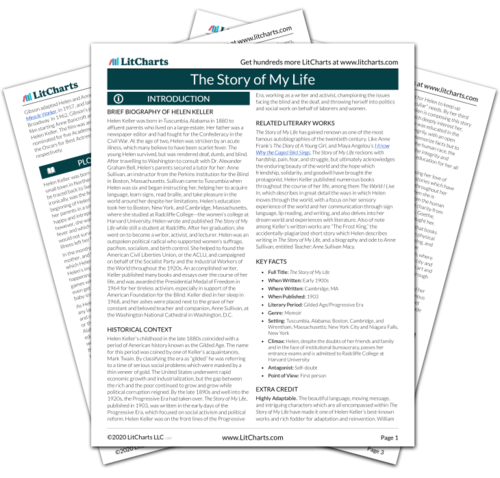 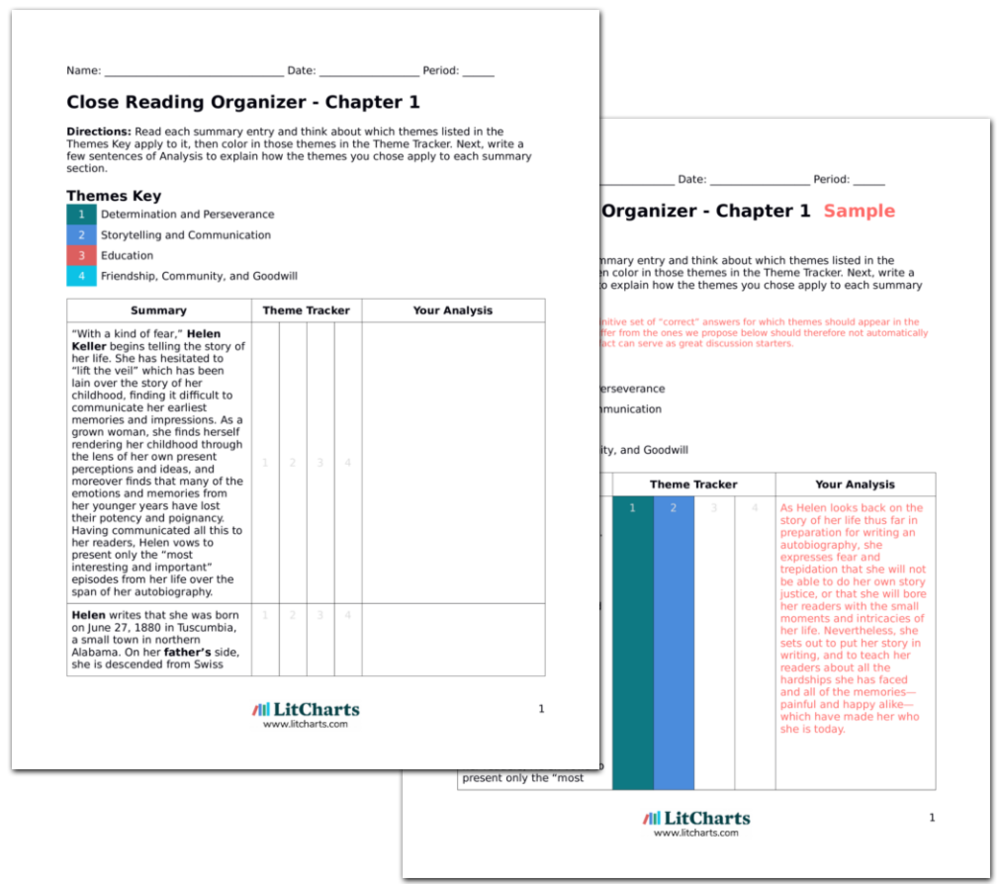