Download this LitChart! (PDF)
Teachers and parents! Struggling with distance learning? Our Teacher Edition on The Testaments can help.

Welcome to the LitCharts study guide on Margaret Atwood's The Testaments. Created by the original team behind SparkNotes, LitCharts are the world's best literature guides.

A concise biography of Margaret Atwood plus historical and literary context for The Testaments.

A quick-reference summary: The Testaments on a single page.

In-depth summary and analysis of every chapter of The Testaments. Visual theme-tracking, too.

Explanations, analysis, and visualizations of The Testaments's themes.

The Testaments's important quotes, sortable by theme, character, or chapter.

Description, analysis, and timelines for The Testaments's characters.

Explanations of The Testaments's symbols, and tracking of where they appear.

An interactive data visualization of The Testaments's plot and themes.

Margaret Atwood was born the middle child of three to her entomologist father and dietician mother in 1939. Due to her father’s study of forest-dwelling insects, Atwood and her family spent much of their time in rural Quebec and traveling between Ottawa and Toronto. Although Atwood was an avid writer from the age of six, penning poems and small plays, she did not attend school full-time until age 12. By 16, Atwood was determined to be a professional writer, and after graduating high school in Leaside, Toronto in 1957, studied at the University of Toronto, where she began publishing her work in the university’s literary journal. In 1961, Atwood moved to Radcliffe College (Harvard’s corollary institution for women, since Harvard was male-only at the time) where she earned a master’s degree and began working on her doctorate, though she abandoned her dissertation midway through. Atwood published her first work in 1961, a book of poetry that won the E.J. Pratt Medal. Throughout the 1960s, Atwood continued to write while working as a college lecturer at several universities in Canada, publishing a number of popular novels, articles, and poetry volumes into the 1970s, several of which won awards. It was not until the 1980s, however, that Atwood’s career truly took off, particularly with the publication of The Handmaid’s Tale in 1985, winner of the Arthur C. Clarke Award, and Cat’s Eye in 1988. Atwood continued to write successful novels, though her next most notable achievement came in 2000 with the publication of The Blind Assassin, which won the Man Booker Prize and was widely lauded by critics. In 2017, The Handmaid’s Tale was made into a TV series, which Atwood advises on, and in 2019 she published The Testaments, the long-awaited sequel to The Handmaid’s Tale.
Get the entire The Testaments LitChart as a printable PDF.
"My students can't get enough of your charts and their results have gone through the roof." -Graham S.
Download 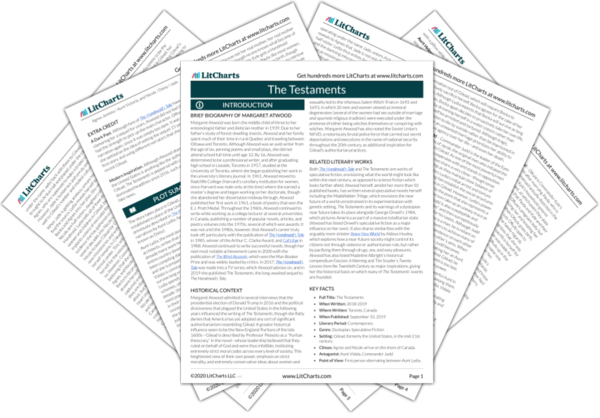 Historical Context of The Testaments

Margaret Atwood admitted in several interviews that the presidential election of Donald Trump in 2016 and the political divisiveness that plagued the United States in the following years influenced the writing of The Testaments, though she flatly denies that America has yet adopted any sort of significant authoritarianism resembling Gilead. A greater historical influence seem to be the New England Puritans of the late 1600s—Gilead is described by Professor Pieixoto as a “Puritan theocracy” in the novel—whose leadership believed that they ruled on behalf of God and were thus infallible, instituting extremely strict moral codes across every level of society. This heightened view of their own power, emphasis on strict morality, and extremely conservative ideas about women and sexuality led to the infamous Salem Witch Trials in 1692 and 1693, in which 20 men and women viewed as immoral degenerates (several of the women had sex outside of marriage and spurned religious tradition) were executed under the pretense of either being witches themselves or conspiring with witches. Margaret Atwood has also noted the Soviet Union’s NKVD, a notoriously brutal police force that carried out secret deportations and executions in the name of national security throughout the 20th century, as additional inspiration for Gilead’s authoritarian practices.

Other Books Related to The Testaments

Both The Handmaid’s Tale and The Testaments are works of speculative fiction, envisioning what the world might look like within the next century, as opposed to science fiction which looks farther afield. Atwood herself, amidst her more than 50 published books, has written several speculative novels herself including the MaddAddam Trilogy, which envisions the near future of a world unrestrained in its experimentation with genetic editing. The Testaments and its warnings of a dystopian near future takes its place alongside George Orwell’s 1984, which pictures America as part of a massive totalitarian state (Atwood has listed Orwell’s speculative fiction as a major influence on her own). It also shares similarities with the arguably more sinister Brave New World by Aldous Huxley, which explores how a near-future society might control its citizens not through violence or authoritarian rule, but rather by pacifying them through drugs, sex, and easy pleasures. Atwood has also listed Madeline Albright’s historical compendium Fascism: A Warning and Tim Snyder’s Twenty Lessons from the Twentieth Century as major inspirations, giving her the historical basis on which many of The Testaments’ events are founded.
Key Facts about The Testaments

Extra Credit for The Testaments

A Dark Past. Although fans of The Handmaid’s Tale have been clamoring for a sequel for years, Atwood did not feel like she had the strength to pick up the main character, Offred’s, narration again, since it was simply too dark. It was only once she settled on the idea of setting the sequel 15 years after the first story and using different narrators that she was able to revisit Gilead.

Modern Inspiration. Although Atwood does not believe that the United States is anything like the authoritarian state of Gilead, The Testaments is peppered with concepts that have dominated headlines since 2016, such as climate change and fake news. 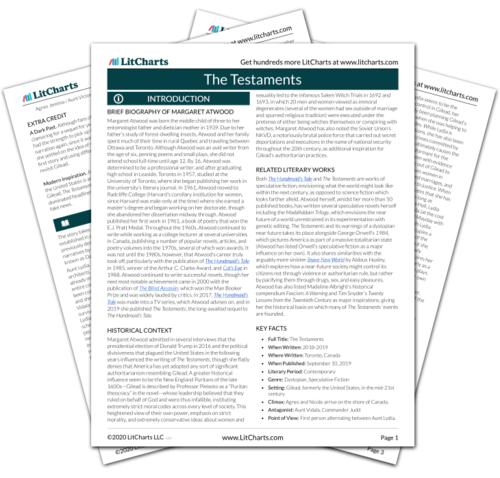 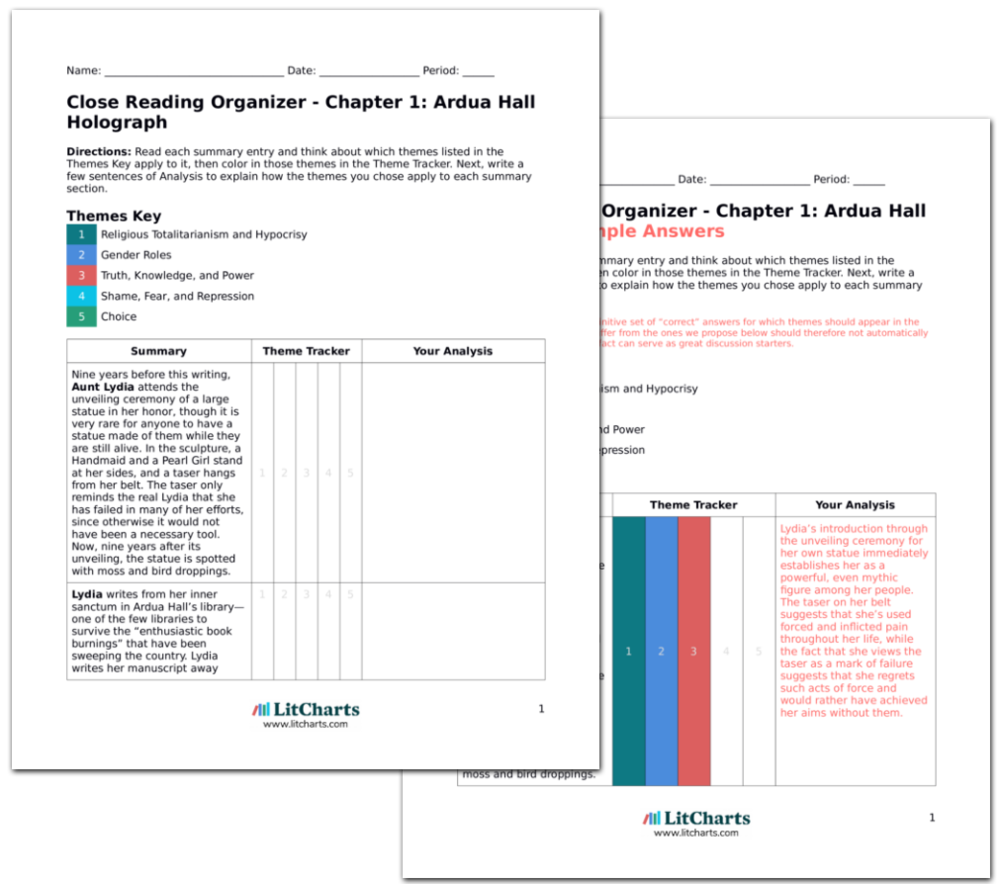