Download this LitChart! (PDF)
Teachers and parents! Struggling with distance learning? Our Teacher Edition on The Blind Assassin can help.

Welcome to the LitCharts study guide on Margaret Atwood's The Blind Assassin. Created by the original team behind SparkNotes, LitCharts are the world's best literature guides.

A concise biography of Margaret Atwood plus historical and literary context for The Blind Assassin.

A quick-reference summary: The Blind Assassin on a single page.

In-depth summary and analysis of every chapter of The Blind Assassin. Visual theme-tracking, too.

Explanations, analysis, and visualizations of The Blind Assassin's themes.

Description, analysis, and timelines for The Blind Assassin's characters.

Explanations of The Blind Assassin's symbols, and tracking of where they appear.

An interactive data visualization of The Blind Assassin's plot and themes.

Margaret Atwood was born in Ottawa and spent much of her childhood in rural Quebec for her father’s job. As a child, she was a voracious reader and began writing poems and plays of her own at the age of six. After graduating from high school, Atwood earned a BA in English from Victoria College in the University of Toronto followed by an MA from Radcliffe College, the women’s college that was part of Harvard University. Atwood began a PhD at Radcliffe but left after two years without finishing the degree. She married the writer Jim Polk in 1968 and divorced him five years later, beginning a relationship with another writer, Graeme Gibson, which lasted until Gibson’s death in 2019. She and Gibson have one daughter, Eleanor, born in 1976. Atwood’s first book was a poetry pamphlet entitled Double Persephone, published in 1961. Throughout the 1960s, ‘70s, and ‘80s Atwood taught at various universities while writing. Some of her most famous books were published in the 1980s, including The Handmaid’s Tale in 1985 and Cat’s Eye in 1988. The popularity of The Handmaid’s Tale in particular is a significant reason behind Atwood’s global fame. In 2019, she published a sequel to The Handmaid’s Tale entitled The Testaments. It was a joint winner of the Booker Prize that year.
Get the entire The Blind Assassin LitChart as a printable PDF.
"My students can't get enough of your charts and their results have gone through the roof." -Graham S.
Download 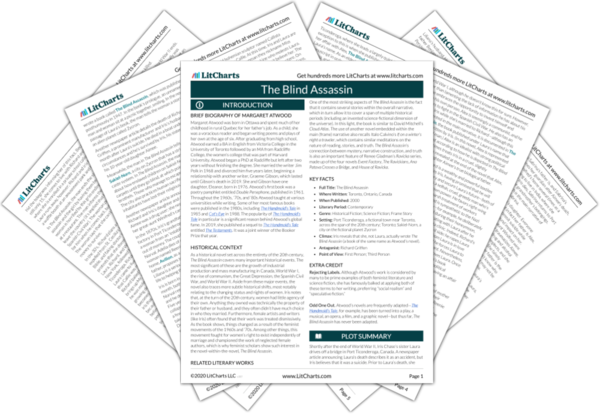 Historical Context of The Blind Assassin

As a historical novel set across the entirety of the 20th century, The Blind Assassin covers many important historical events. The most significant of these are the growth of industrial production and mass manufacturing in Canada, World War I, the rise of communism, the Great Depression, the Spanish Civil War, and World War II. Aside from these major events, the novel also traces more subtle historical shifts, most notably relating to the changing status and rights of women. Iris notes that, at the turn of the 20th century, women had little agency of their own. Anything they owned was technically the property of their father or husband, and they often didn’t have much choice in who they married. Furthermore, female artists and writers (like Iris) often found that their work was treated dismissively. As the book shows, things changed as a result of the feminist movements of the 1960s and ‘70s. Among other things, this movement fought for women’s right to exist independently of marriage and championed the work of neglected female authors, which is why feminist scholars show such interest in the novel-within-the-novel, The Blind Assassin.

Other Books Related to The Blind Assassin

One of the most striking aspects of The Blind Assassin is the fact that it contains several stories within the overall narrative, which in turn allow it to cover a span of multiple historical periods (including an invented science-fictional dimension of the universe). In this light, the book is similar to David Mitchell’s Cloud Atlas. The use of another novel embedded within the main (frame) narrative also recalls Italo Calvino’s If on a winter’s night a traveler, which contains similar meditations on the nature of reading, stories, and truth. The Blind Assassin’s connection between mystery, narrative construction, and truth is also an important feature of Renee Gladman’s Ravicka series, made up of the four novels Event Factory, The Ravickians, Ana Patova Crosses a Bridge, and House of Ravicka.
Key Facts about The Blind Assassin

Extra Credit for The Blind Assassin

Rejecting Labels. Although Atwood’s work is considered by many to be prime examples of both feminist literature and science fiction, she has famously balked at applying both of these terms to her writing, preferring “social realism” and “speculative fiction.”

Odd One Out. Atwood’s novels are frequently adapted—The Handmaid’s Tale, for example, has been turned into a play, a musical, an opera, a film, and a graphic novel—but thus far, The Blind Assassin has never been adapted. 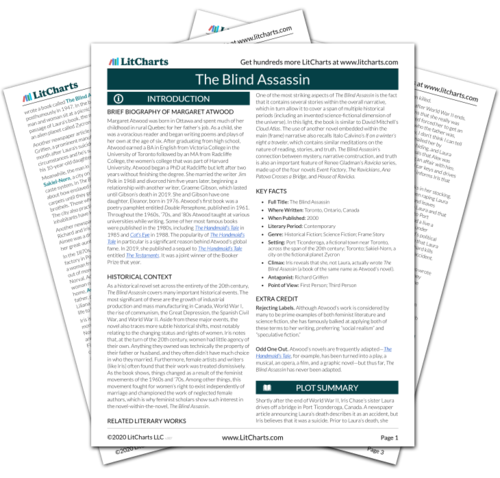 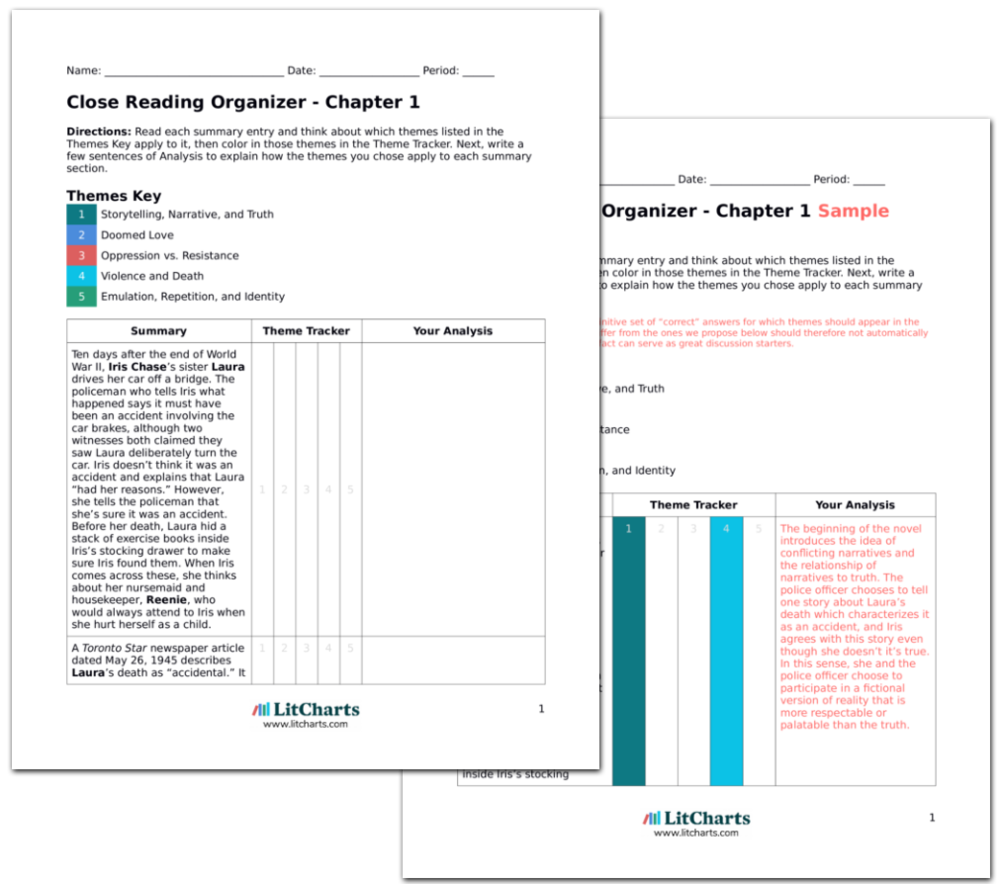