Download this LitChart! (PDF)
Teachers and parents! Struggling with distance learning? Our Teacher Edition on The Three Sisters can help.

On May 5th, the three Prozorov sisters sit in their drawing-room in a Russian provincial capital. The youngest, 20-year-old Irina, is celebrating her name-day, and the eldest, 28-year-old Olga, recalls their father’s death one year ago today. In contrast to last year’s snowy, sorrowful day, today’s weather is sunny, and the sisters, especially Irina, feel hopeful. Olga and Irina both hope they will soon move back to their beloved hometown of Moscow.

Several soldiers and an elderly family friend, Chebutykin, come to visit for the name-day celebration. One solider, Baron Tuzenbakh, shares Irina’s idealization of labor, and they discuss their longing to work someday. Masha, the middle Prozorov sister, is about to leave the dull party when a new Lieutenant-Colonel, Vershinin, is introduced. He is a married, philosophically inclined man in his 40s, and he knew the sisters’ parents in Moscow. The sisters introduce their brother, Andrey, and brag about his academic promise.

As Vershinin speculates about the future transformation of society, Masha abruptly decides she’s staying for lunch. Not long after, Kulygin arrives and lavishes affection on his wife, Masha, who grumpily avoids him. As the others sit down to lunch, Irina confides in Tuzenbakh that Masha is unhappy with Kulygin. Tuzenbakh declares his love for Irina, but she doesn’t reciprocate. Andrey’s girlfriend, Natasha, arrives late and awkwardly dressed. When Chebutykin teases her at lunch, she runs out of the room. Andrey follows her, comforts her, and asks her to marry him.

Over a year later, Andrey and Natasha are married with a baby boy. They live in the sisters’ house, and Natasha runs things while Olga and Irina are at work. Andrey is secretary of the Distinct Council but still dreams about his abandoned hope of becoming a professor. His only confidant is his elderly servant, Ferapont.

One evening in February, everyone is coming to the house for a Carnival party. Masha and Vershinin arrive together; they have begun an affair. Irina and Tuzenbakh also arrive together, since Tuzenbakh walks Irina home each day from her job at the Telegraph Office. Irina hates her job and can’t wait to move to Moscow in June. Tuzenbakh and Vershinin discuss the meaning of life and happiness, Vershinin arguing that people must strive for eventual progress, even if they don’t live to see it. When it becomes clear that Natasha has canceled the night’s entertainment without consulting anyone, Andrey and Chebutykin go off to play cards, and Natasha sneaks off for a carriage ride with Protopopov, the head of the District Council.

A year later, a fire breaks out in the town, and the sisters and friends convene at the Prozorov house after a long night of trying to help the victims. Olga and Natasha have an argument about the Prozorov’s elderly servant, Anfisa, whom Natasha insists is too useless to be kept around. Chebutykin comes in, terribly drunk and depressed at having caused the death of a patient the other day. He announces to everyone that Natasha is having an affair with Protopopov, though actually, the whole town knows this.

When their friends depart, the sisters discuss the shame of Andrey’s gambling debts. Irina weeps that she, too, is unhappy in her new job in the Town Council, and she knows that they’re never moving to Moscow. Olga suggests that she marry Tuzenbakh for pragmatic reasons, instead of waiting to meet her true love in Moscow. Masha confesses her love for Vershinin. Andrey comes in and makes a speech, trying to convince the sisters that he’s happy with Natasha and in his District Council position, but he breaks down in tears, saying, “Dear sisters, don’t believe me.”

A little more than a year later, the brigade is preparing to transfer to Poland. Tuzenbakh has retired from the army for a job in a brick factory, and tomorrow he and Irina are getting married; Irina will then start a teaching job. Olga has become headmistress and is never at home anymore. Lonely, Irina has come to terms with the fact that she’s destined not to live in Moscow and made the rational decision to marry Tuzenbakh and begin a new life.

Chebutykin tells Andrey and Masha that Solyony, a soldier who also loves Irina, has challenged Tuzenbakh to a duel. Andrey admits to Chebutykin that he’s unhappy with Natasha, and Chebutykin encourages him to leave.

Tuzenbakh tenderly bids Irina goodbye; she doesn’t know about the impending duel, but she weeps, sorry that she’s unable to really love Tuzenbakh. Vershinin offers Olga some parting philosophy, promising that someday life will be “filled with light.” He kisses Masha goodbye and leaves. Kulygin sees Masha’s tears and lovingly forgives her for the affair, saying they’ll resume life the way it was before.

There’s the sound of a muffled shot in the distance, and soon Chebutykin comes out with the news that Tuzenbakh has been killed in the duel. The grieving sisters cling to one another. Masha says they must each try to start life anew. Irina says she will pour herself into her teaching work. Olga says that someday, those who come after them will experience joy, but that the meaning of their suffering is a mystery for now—“if we only knew!” 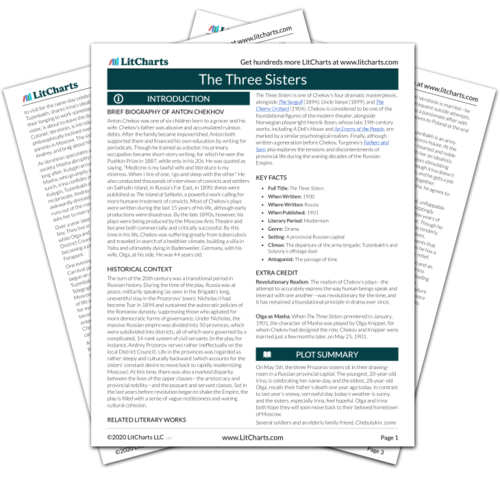 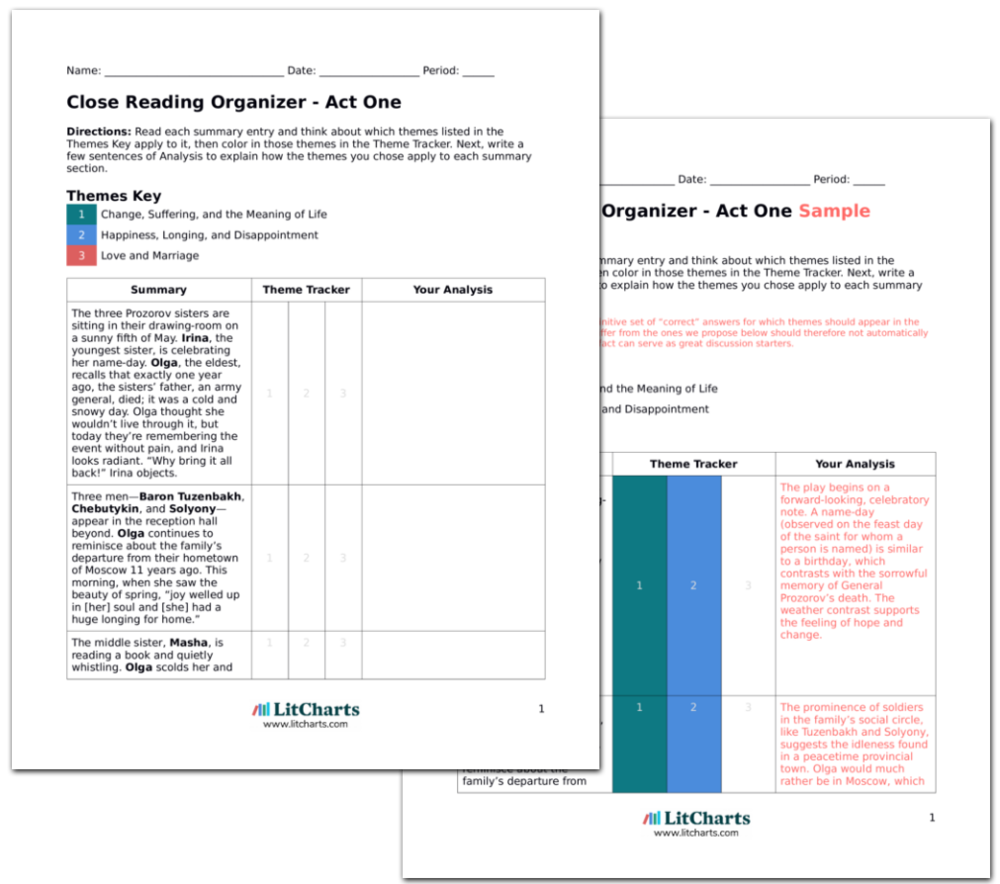