Get LitCharts A+
LitCharts assigns a color and icon to each theme in The Visit, which you can use to track the themes throughout the work.

In the town of Güllen, nothing is as it seems: characters’ motivations are not what they claim, false appearances disguise reality, and even the town’s economic downturn is revealed not to have happened as the townspeople believed. All of this creates an atmosphere of distrust and manipulation in which everyone is acting in their own best interest, no matter how sincere or compassionate they seem.

When the play opens, the townspeople of Güllen are furiously preparing for Claire’s visit, attempting to dress up their poverty and impress the billionairess in the hopes that she might endow them with a large donation. Perhaps the most absurd of these displays—which include welcome signs and a choir performance—is the Mayor’s blatant distortion of Claire’s past (her bad school grades, skirmishes with the police, and petty theft) into a fond speech honoring her for her intelligence, justice, and charity. This sleazy and misleading display is calculated to flatter Claire into giving money. Though the mayor exhorts the townsfolk to “be natural [and] be sincere,” he also warns them not “to slip up on the timing.” In short, Güllen tries to appear to genuinely admire Claire in order to mask their desperate need for her money.

Claire’s early arrival, however, calls attention to this separation between appearance and reality, as the town’s preparations are not done: the sign remains unfinished, the choir and band have not yet assembled, and the Gülleners remain in their shabby common clothes. Moreover, Claire is the only character willing to always call a situation as she sees it. Claire is quick to point out the untruths in the mayor’s concocted speech, and bluntly deflects Ill’s compliments of her appearance: “I’ve gotten old […] and fat,” she says. “And my left leg is gone. But the artificial one is quite something, don’t you think?” Claire’s arrival and brusque manner expose Güllen for what it is in more profound ways, as well. Though the townspeople initially refuse Claire’s bargain of Ill’s death for a billion dollars, her manipulation of them reveals their true values. Just as their feigned sincerity was meant to disguise their desperation, their vows not to kill Ill turn out to be disguises for their greed.

The difference between appearance and reality in The Visit is the source of both the play’s humor and its tragedy. Throughout the play, the characters often say the opposite of what they mean—in other words, they speak ironically. This incongruity subverts the audience’s expectations, and often compels readers and viewers to respond with laughter. For example, Ill tells Claire that she looks the same as she did when they were young, but in fact, many of her limbs have been replaced with prostheses. Claire’s ravaged body records another humorous irony. Superficially, it is all artifice—an assemblage of prostheses apparently held together by a vengeful fury. Her leg looks like a leg, but is wood. Her hand feels like a hand, but is ivory. Her white wedding dress signals innocence and virginity, but is worn by a former prostitute and deeply vengeful woman. Nevertheless, Claire is the only character in the play that never deceives anyone. She is honest about her appearance and about her desire to see Ill killed. Like other characters in the play, then, Claire embodies a disconnect between appearance and reality—though her appearance is artificial, her words are always true.

By the end of the play, however, this humorous dissonance between truth and appearance becomes a source of tragic, dramatic irony. At the end of the play, the journalists leave Güllen believing that Ill died of joy, when, in reality, he was murdered in cold blood for money. The ultimate irony of the play, of course, is that the original petty reason for Ill’s desertion of Claire—his decision to marry the shopkeeper’s daughter for her money—is now mirrored in the unanimous rejection of Ill by the whole population of the town.

The ThemeTracker below shows where, and to what degree, the theme of Irony and Artifice appears in each act of The Visit. Click or tap on any chapter to read its Summary & Analysis.
How often theme appears:
act length:
Act
Act 1
1
Act 2
2
Act 3
3
Get the entire The Visit LitChart as a printable PDF.
"My students can't get enough of your charts and their results have gone through the roof." -Graham S.
Download 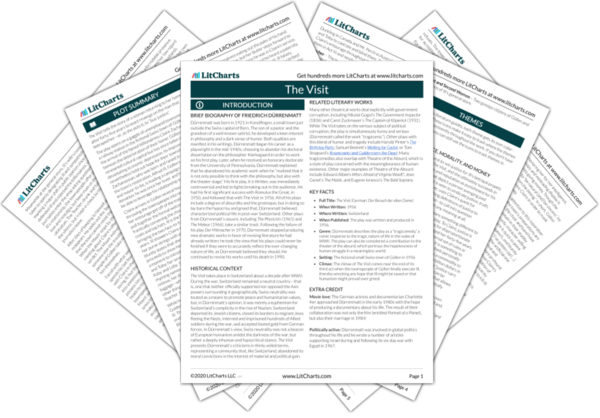 Irony and Artifice Quotes in The Visit

Below you will find the important quotes in The Visit related to the theme of Irony and Artifice.
Act 1 Quotes

ILL: I wish time were suspended, my little sorceress. If only life hadn’t torn us apart.

CLAIRE ZACHANASSIAN: You wish that?

ILL: Just that, nothing else. You know I love you! (He kisses her right hand.) The same cool white hand.

ILL: (Dropping her hand, horrified) Clara, is everything about you artificial?!

You have remained unforgettable. Truly. Your academic achievements are still held up as an example by our educators, especially the interest you showed in the most important subject, botany and zoology, thus expressing your sympathy with every living being, indeed with all creatures in need of protection. Even then, your love of justice and your charitable nature were widely admired.

ILL: The customers I’ve had this morning. Usually there’s no one for the longest time, and now, for the past few days, they’re coming in droves.

FIRST MAN: It’s because we stand by you. We stick by our Ill. Firm as a rock.

MAYOR: You forget that you’re in Güllen. A town with a humanist tradition. Goethe slept here. Brahms composed a quartet. These values impose an obligation.

A man enters, left, with a typewriter.

MAN: The new typewriter, Your Honor. A Remington.

MAYOR: The Claire Zachanassian Endowment has been accepted. Unanimously. Not for the sake of the money—

THE COMMUNITY: Not for the sake of the money—

MAYOR: But for the sake of justice—

THE COMMUNITY: But for the sake of justice—

MAYOR: And to allay our conscience.

THE COMMUNITY: And to allay our conscience.

MAYOR: For we cannot live if we sanction a crime in our midst—

THE COMMUNITY: For we cannot live if we sanction a crime in our midst—