Download this LitChart! (PDF)
Teachers and parents! Struggling with distance learning? Our Teacher Edition on Top Girls can help.

Welcome to the LitCharts study guide on Caryl Churchill's Top Girls. Created by the original team behind SparkNotes, LitCharts are the world's best literature guides.

A concise biography of Caryl Churchill plus historical and literary context for Top Girls.

A quick-reference summary: Top Girls on a single page.

In-depth summary and analysis of every act of Top Girls. Visual theme-tracking, too.

Explanations of Top Girls's symbols, and tracking of where they appear.

An interactive data visualization of Top Girls's plot and themes.

Caryl Churchill was born in London, England, but from the age of ten was raised in Montreal, Quebec. Churchill returned to England to attend Lady Margaret Hall, a women’s college at Oxford University. There, Churchill began writing plays, and had several performed by Oxford students. After graduation, Churchill married, and began writing short radio dramas for BBC radio while she raised her children. In the 1970s, Churchill began receiving larger attention for her work; she was appointed resident dramatist at the prestigious and experimental Royal Court Theatre in 1974, and her 1979 play, Cloud 9, received international acclaim. Top Girls, Serious Money, and The Skriker followed, and each play earned Churchill success on the global stage. Her plays use hyperrealism or surrealism to explore issues of class, gender, political corruption, and environmental destruction. Her more recent work, since the year 2000, has focused on the ways humans communicate and self-identify. In 2010, Churchill was inducted into the American Theater Hall of Fame; she is known the world over as one of the most prolific and intriguing contemporary playwrights in the industry.
Get the entire Top Girls LitChart as a printable PDF.
"My students can't get enough of your charts and their results have gone through the roof." -Graham S.
Download 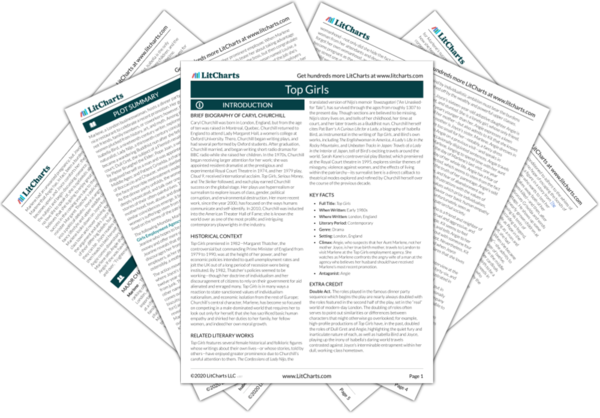 Top Girls premiered in 1982—Margaret Thatcher, the controversial but commanding Prime Minister of England from 1979 to 1990, was at the height of her power, and her economic policies intended to quell unemployment rates and jolt the UK out of a long period of recession were being instituted. By 1982, Thatcher’s policies seemed to be working—though her doctrine of individualism and her discouragement of citizens to rely on their government for aid alienated and enraged many. Top Girls is in many ways a reaction to state-sanctioned values of individualism nationalism, and economic isolation from the rest of Europe; Churchill’s central character, Marlene, has become so focused on competing in a male-dominated world that requires her to look out only for herself, that she has sacrificed basic human empathy and shirked her duties to her family, her fellow women, and indeed her own moral growth.

Other Books Related to Top Girls

Top Girls features several female historical and folkloric figures whose writings about their own lives—or whose stories, told by others—have enjoyed greater prominence due to Churchill’s careful attention to them. The Confessions of Lady Nijo, the translated version of Nijo’s memoir Towazugatari (“An Unasked-for Tale”), has survived through the ages from roughly 1307 to the present day. Though sections are believed to be missing, Nijo’s story lives on, and tells of her childhood, her time at court, and her later travels as a Buddhist nun. Churchill herself cites Pat Barr’s A Curious Life for a Lady, a biography of Isabella Bird, as instrumental in the writing of Top Girls, and Bird’s own works, including The Englishwoman in America, A Lady’s Life in the Rocky Mountains, and Unbeaten Tracks in Japan: Travels of a Lady in the Interior of Japan, tell of Bird’s exciting travels around the world. Sarah Kane’s controversial play Blasted, which premiered at the Royal Court theatre in 1995, explores similar themes of misogyny, violence against women, and the effects of living within the patriarchy—its surrealist bent is a direct callback to theatrical modes explored and refined by Churchill herself over the course of the previous decade.
Key Facts about Top Girls

Double Act. The roles played in the famous dinner party sequence which begins the play are nearly always doubled with the roles featured in the second half of the play, set in the “real” world of modern-day London. The doubling of roles often serves to point out similarities or differences between characters that might otherwise go overlooked; for example, high-profile productions of Top Girls have, in the past, doubled the roles of Dull Gret and Angie, highlighting the quiet fury and inarticulate nature of each, as well as Isabella Bird and Joyce, playing up the irony of Isabella’s daring world travels contrasted against Joyce’s interminable entrapment within her dull, working-class hometown. 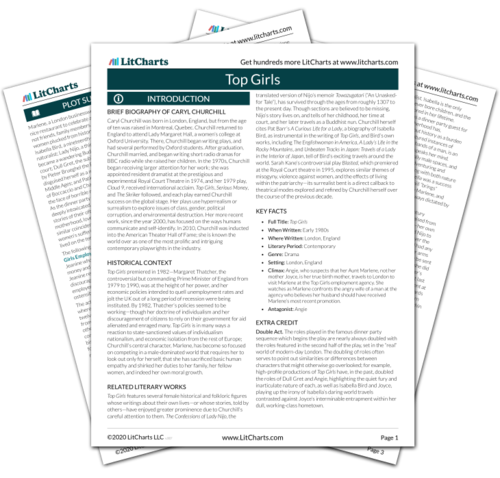 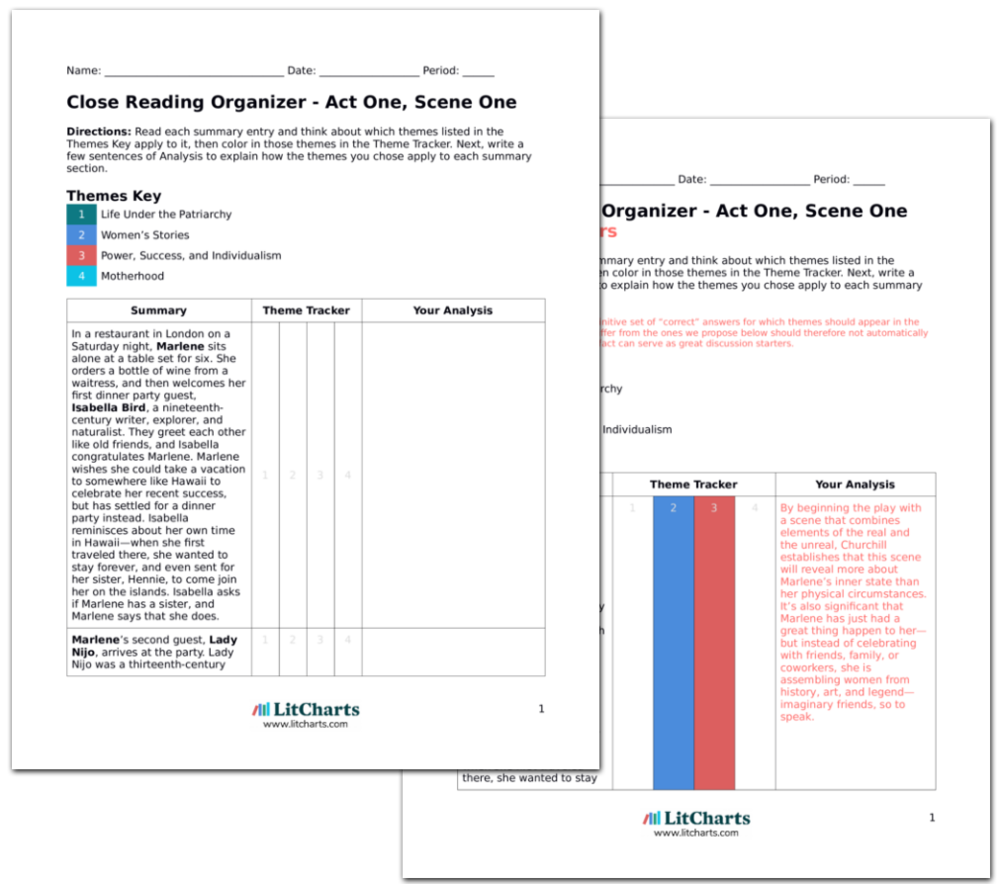