Download this LitChart! (PDF)
Teachers and parents! Struggling with distance learning? Our Teacher Edition on Unwind can help.

Welcome to the LitCharts study guide on Neal Shusterman's Unwind. Created by the original team behind SparkNotes, LitCharts are the world's best literature guides.

A concise biography of Neal Shusterman plus historical and literary context for Unwind.

A quick-reference summary: Unwind on a single page.

In-depth summary and analysis of every chapter of Unwind. Visual theme-tracking, too.

Explanations of Unwind's symbols, and tracking of where they appear.

An interactive data visualization of Unwind's plot and themes.

Shusterman was born in Brooklyn, New York and spent much of his childhood reading. His parents moved the family to Mexico City when he was 16, something that he credits today for giving him a new perspective on life and confidence that he couldn't have found anywhere else. He graduated from the American School Foundation in Mexico City and then earned bachelor's degrees in psychology and theater. Shusterman worked briefly for a Los Angeles-based talent agency after college, and within a year of his hire, he landed his first book deal and began writing screenplays. Many of his books, most notably his 2015 novel Challenger Deep, have received honors and awards, and several are being adapted for film. He lives in Southern California with his children.
Get the entire Unwind LitChart as a printable PDF.
"My students can't get enough of your charts and their results have gone through the roof." -Graham S.
Download 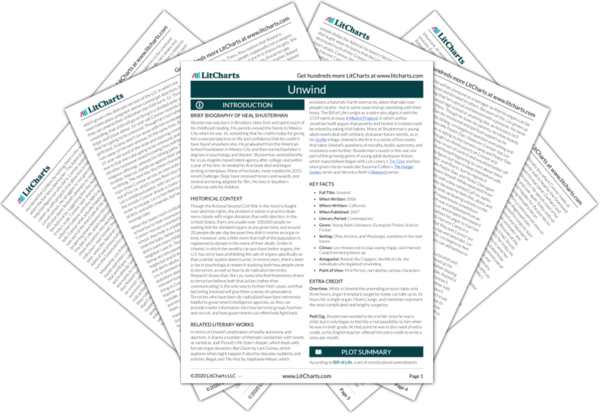 Though the fictional Second Civil War in the novel is fought over abortion rights, the problem it solves in practice deals more closely with organ donation than with abortion. In the United States, there are usually over 100,000 people on waiting lists for donated organs at any given time, and around 20 people die per day because they didn’t receive an organ in time. However, only a little more than half of the population is registered to donate in the event of their death. Unlike in Unwind, in which the wealthy can purchase better organs, the U.S. has strict laws prohibiting the sale of organs specifically so that a similar system doesn’t arise. In recent years, there’s been a rise in psychological research studying both how people come to terrorism, as well as how to de-radicalize terrorists. Research shows that, like Lev, many who find themselves drawn to terrorism believe both that action (rather than communicating) is the only way to further their cause, and that becoming involved will give them a sense of camaraderie. Terrorists who have been de-radicalized have been extremely helpful to government intelligence agencies, as they can provide insider information into how terrorist groups function and recruit, and how governments can effectively fight back.

Other Books Related to Unwind

In terms of Unwind’s exploration of bodily autonomy and abortion, it shares a number of thematic similarities with novels as varied as Jodi Picoult’s My Sister’s Keeper, which deals with forced organ donation; Red Clocks by Leni Zumas, which explores what might happen if abortion became suddenly and entirely illegal; and The Host by Stephanie Meyer, which envisions a futuristic Earth overrun by aliens that take over people’s brains—but in some cases end up coexisting with their hosts. The Bill of Life’s origin as a satire also aligns it with the 1729 satirical essay A Modest Proposal, in which author Jonathan Swift argues that poverty and famine in Ireland could be solved by eating Irish babies. Many of Shusterman’s young adult novels deal with similarly dystopian future worlds, as in his Scythe trilogy. Unwind is the first in a series of five novels that takes Unwind’s questions of morality, bodily autonomy, and resistance even further. Shusterman’s novels in this vein are part of the growing genre of young adult dystopian fiction, which many believe began with Lois Lowry’s The Giver and has since given rise to novels like Suzanne Collins’s The Hunger Games series and Veronica Roth’s Divergent series.
Key Facts about Unwind

Overtime. While in Unwind the unwinding process takes only three hours, organ transplant surgeries today can take up to 16 hours for a single organ. Hearts, lungs, and intestines represent the most complicated and lengthy surgeries.

Paid Gig. Shusterman wanted to be a writer since he was a child, but it only began to feel like a real possibility to him when he was in ninth grade. At that point he was in dire need of extra credit, so his English teacher offered him extra credit to write a story per month. 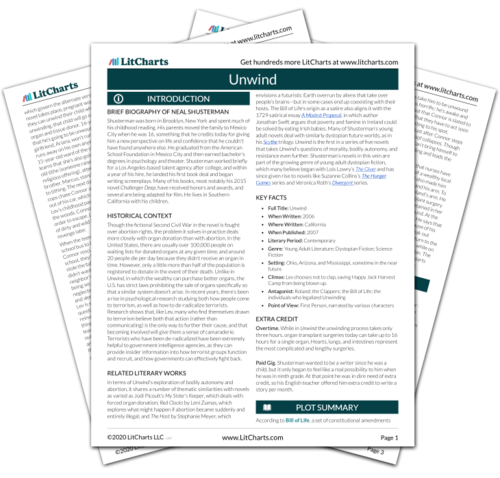 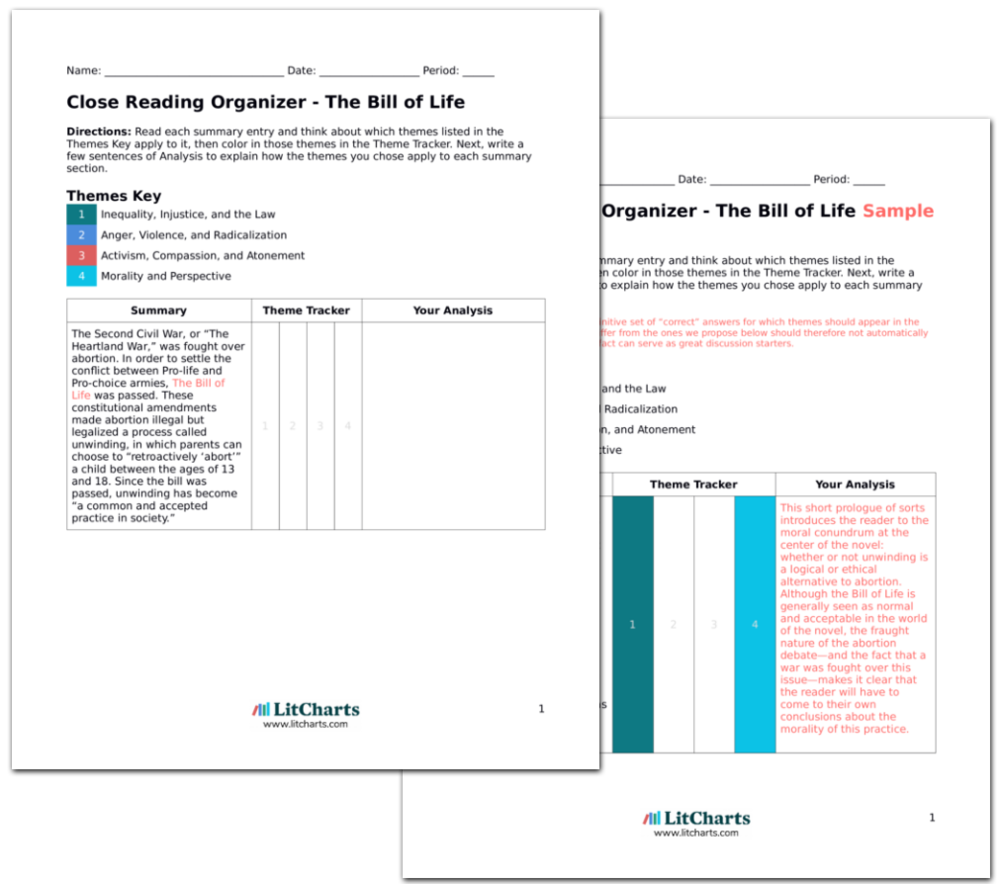