Download this LitChart! (PDF)
Teachers and parents! Struggling with distance learning? Our Teacher Edition on Walk Two Moons can help.

Welcome to the LitCharts study guide on Sharon Creech's Walk Two Moons. Created by the original team behind SparkNotes, LitCharts are the world's best literature guides.

A concise biography of Sharon Creech plus historical and literary context for Walk Two Moons.

A quick-reference summary: Walk Two Moons on a single page.

In-depth summary and analysis of every chapter of Walk Two Moons. Visual theme-tracking, too.

Explanations of Walk Two Moons's symbols, and tracking of where they appear.

Sharon Creech was born in South Euclid, Ohio, a suburb of Cleveland. She grew up in a large family—in fact, Mary Lou Finney’s brothers in Walk Two Moons and Absolutely Normal Chaos are named after and based off of Creech’s brothers. Throughout her childhood, Creech’s parents regularly took the family on road trips, once all the way to Idaho. (This trip partially inspired Walk Two Moons.) It wasn’t until college that Creech discovered literature and writing. After graduating, she taught high school English and writing courses in England in Switzerland and eventually began writing her own novels for adults. But since writing her third book and her first book for kids, Absolutely Normal Chaos, Creech has written mostly for young readers. Creech and her husband have lived in England and the United States; they were living in England when Creech received the call that Walk Two Moons won the Newbery Medal in 1995. She and her husband returned to the United States in 1998 and currently live in Maine. Walk Two Moons is Creech’s most critically acclaimed novel.
Get the entire Walk Two Moons LitChart as a printable PDF.
"My students can't get enough of your charts and their results have gone through the roof." -Graham S.
Download 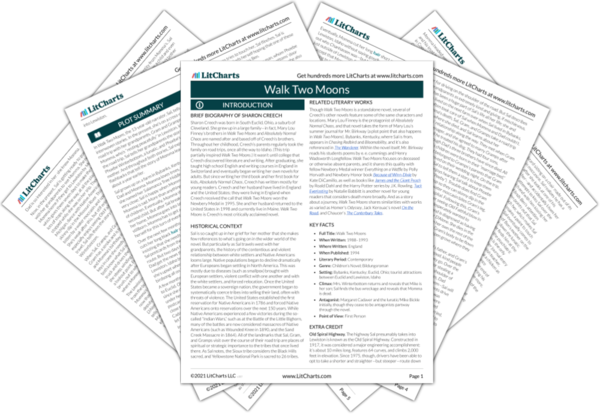 Sal is so caught up in her grief for her mother that she makes few references to what’s going on in the wider world of the novel. But particularly as Sal travels west with her grandparents, the history of the contentious and violent relationship between white settlers and Native Americans looms large. Native populations began to decline dramatically after Europeans began settling in North America. This was mostly due to diseases (such as smallpox) brought with European settlers, violent conflict with one another and with the white settlers, and forced relocation. Once the United States became a sovereign nation, the government began to systematically coerce tribes into selling their land, often with threats of violence. The United States established the first reservation for Native Americans in 1786 and forced Native Americans onto reservations over the next 150 years. While Native Americans experienced a few victories during the so-called “Indian Wars,” such as at the Battle of the Little Bighorn, many of the battles are now considered massacres of Native Americans (such as Wounded Knee in 1890, and the Sand Creek Massacre in 1864). All of the landmarks that Sal, Gram, and Gramps visit over the course of their road trip are places of spiritual or strategic importance to the tribes that once lived there. As Sal notes, the Sioux tribe considers the Black Hills sacred, and Yellowstone National Park is sacred to 26 tribes.

Though Walk Two Moons is a standalone novel, several of Creech’s other novels feature some of the same characters and locations. Mary Lou Finney is the protagonist of Absolutely Normal Chaos, and that novel takes the form of Mary Lou’s summer journal for Mr. Birkway (a plot point that also happens in Walk Two Moons). Bybanks, Kentucky, where Sal is from, appears in Chasing Redbird and Bloomability, and it’s also referenced in The Wanderer. Within the novel itself, Mr. Birkway reads his students poems by e. e. cummings and Henry Wadsworth Longfellow. Walk Two Moons focuses on deceased or otherwise absent parents, and it shares this quality with fellow Newbery Medal winner Everything on a Waffle by Polly Horvath and Newbery Honor book Because of Winn-Dixie by Kate DiCamillo, as well as books like James and the Giant Peach by Roald Dahl and the Harry Potter series by J.K. Rowling. Tuck Everlasting by Natalie Babbitt is another novel for young readers that considers death more broadly. And as a story about a journey, Walk Two Moons shares similarities with works as varied as Homer’s Odyssey, Jack Kerouac’s novel On the Road, and Chaucer’s The Canterbury Tales.
Key Facts about Walk Two Moons

Old Spiral Highway. The highway Sal presumably takes into Lewiston is known as the Old Spiral Highway. Constructed in 1917, it was considered a major engineering accomplishment: it’s about 10 miles long, features 64 curves, and climbs 2,000 feet in elevation. Since 1975, though, drivers have been able to opt to take a shorter and straighter—but steeper—route down into Lewiston. 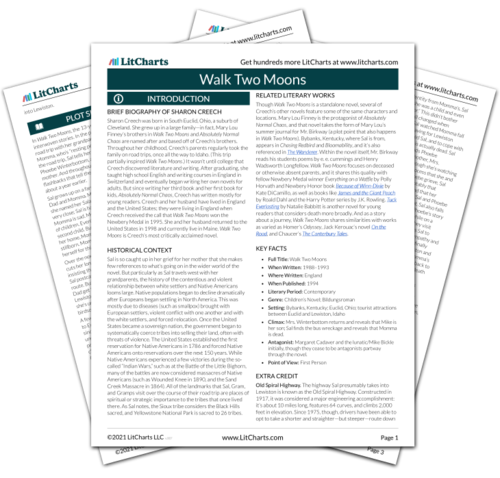 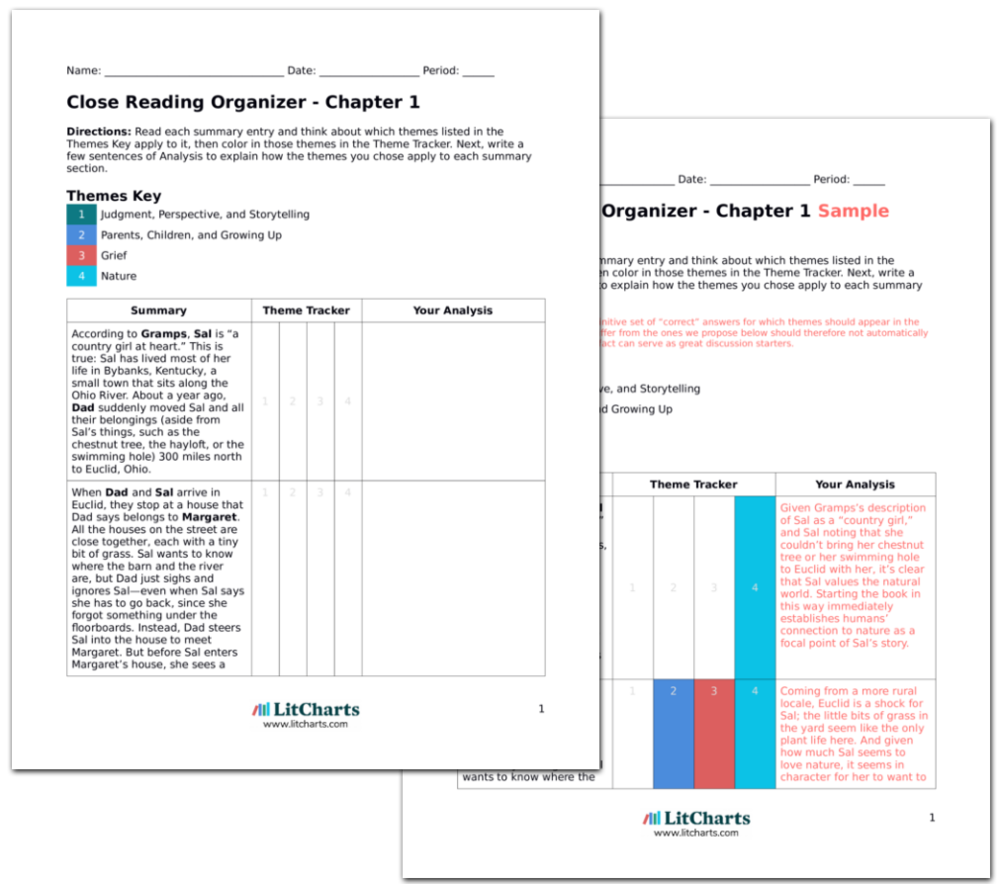