Download this LitChart! (PDF)
Teachers and parents! Struggling with distance learning? Our Teacher Edition on What the Eyes Don’t See can help.

Welcome to the LitCharts study guide on Mona Hanna-Attisha's What the Eyes Don’t See. Created by the original team behind SparkNotes, LitCharts are the world's best literature guides.

What the Eyes Don’t See: Introduction

A concise biography of Mona Hanna-Attisha plus historical and literary context for What the Eyes Don’t See.

A quick-reference summary: What the Eyes Don’t See on a single page.

In-depth summary and analysis of every chapter of What the Eyes Don’t See. Visual theme-tracking, too.

What the Eyes Don’t See: Themes

Explanations, analysis, and visualizations of What the Eyes Don’t See's themes.

What the Eyes Don’t See: Quotes

What the Eyes Don’t See's important quotes, sortable by theme, character, or chapter.

What the Eyes Don’t See: Characters

Description, analysis, and timelines for What the Eyes Don’t See's characters.

Description, analysis, and timelines for What the Eyes Don’t See's terms.

What the Eyes Don’t See: Symbols

Explanations of What the Eyes Don’t See's symbols, and tracking of where they appear.

An interactive data visualization of What the Eyes Don’t See's plot and themes.

Dr. Mona Hanna-Attisha was born Mona Hanna in Sheffield to a pair of scientists who fled Iraq during Saddam Hussein’s regime. When Mona was still young, her family moved from England to Detroit, Michigan, where there was a thriving immigrant community of Iraqis and Chaldeans—the Christian sect to which the Hannas belonged. A careful student and a passionate environmental activist from a young age, Mona attended the University of Michigan, where she earned a BS in environmental health and a Master of Public Health degree. She then attended medical school at Michigan State University and completed her last two clinical years of school in Flint, where she would later become the director of the pediatric residency program at Hurley Medical Center, a public teaching hospital located in Flint and affiliated with MSU. In 2015, “Dr. Mona,” as her patients call her, leapt to national attention when she became a whistleblower in the Flint water crisis. Mona had conducted research proving that Flint children’s blood-lead levels had spiked after city officials, seeking to cut corners, switched the city’s water source from the Detroit River to the Flint River. Though the state of Michigan initially dismissed and derided Mona’s claims, they soon reversed their position and confirmed Mona’s extraordinary findings. As a public health advocate, Mona has testified before congress about the Flint water crisis and played a major role in securing federal and state funding and social support for Flint residents.
Get the entire What the Eyes Don’t See LitChart as a printable PDF.
"My students can't get enough of your charts and their results have gone through the roof." -Graham S.
Download 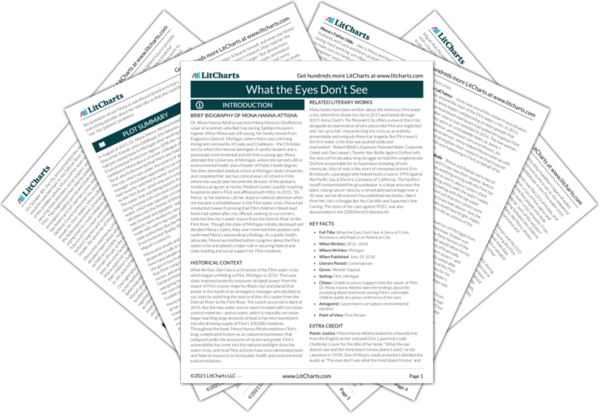 Historical Context of What the Eyes Don’t See

What the Eyes Don’t See is a chronicle of the Flint water crisis, which began unfolding in Flint, Michigan in 2014. That year, state-imposed austerity measures stripped power from the mayor of Flint (a poor, majority-Black city) and placed that power in the hands of an emergency manager who decided to cut costs by switching the source of the city’s water from the Detroit River to the Flint River. The switch occurred in April of 2014. But the new water source wasn’t treated with corrosion-control materials—and so water, which is naturally corrosive, began leaching large amounts of lead (a harmful neurotoxin) into the drinking supply of Flint’s 100,000 residents. Throughout the book, Mona Hanna-Attisha explores Flint’s long, complicated history as an industrial boomtown that collapsed under the pressures of racism and greed. Flint’s vulnerability has come into the national spotlight since the water crisis, and local Flint activists have since demanded state and federal resources to fund public health and environmental justice initiatives.

Other Books Related to What the Eyes Don’t See

Many books have been written about the infamous Flint water crisis, which first shook the city in 2015 and lasted through 2019. Anna Clark’s The Poisoned City offers a view of the crisis alongside an examination of why places like Flint are neglected and “set up to fail,” characterizing the crisis as an entirely preventable and uniquely American tragedy. But Flint wasn’t the first water crisis that was pushed aside and overlooked—Robert Bilott’s Exposure: Poisoned Water, Corporate Greed, and One Lawyer’s Twenty-Year Battle Against DuPont tells the story of his decades-long struggle to hold the conglomerate DuPont accountable for its hazardous dumping of toxic chemicals. Also of note is the story of renowned activist Erin Brockovich, a paralegal who helped build a case in 1993 against the Pacific Gas & Electric Company of California. The facility’s runoff contaminated the groundwater in a large area near the plant, raising cancer rates by a remarkable percentage over a 10-year period. Brockovich has published two books, Take it From Me: Life’s a Struggle But You Can Win and Superman’s Not Coming. The story of her case against PGEC was also documented in the 2000 film Erin Brockovich.
Key Facts about What the Eyes Don’t See

Extra Credit for What the Eyes Don’t See

Poetic Justice. Mona Hanna-Attisha looked to a favorite line from the English writer and poet D.H. Lawrence’s Lady Chatterley’s Lover for the title of her book. “What the eye doesn’t see and the mind doesn’t know doesn’t exist,” wrote Lawrence in 1928. One of Mona’s medical mentors distilled the quote as “The eyes don’t see what the mind doesn’t know,” and the quotation struck Mona as a profound directive to learn everything possible about her specialty so that she could better “see” her patients’ problems. 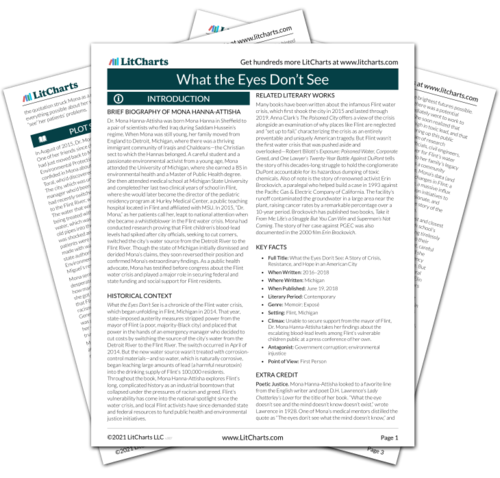 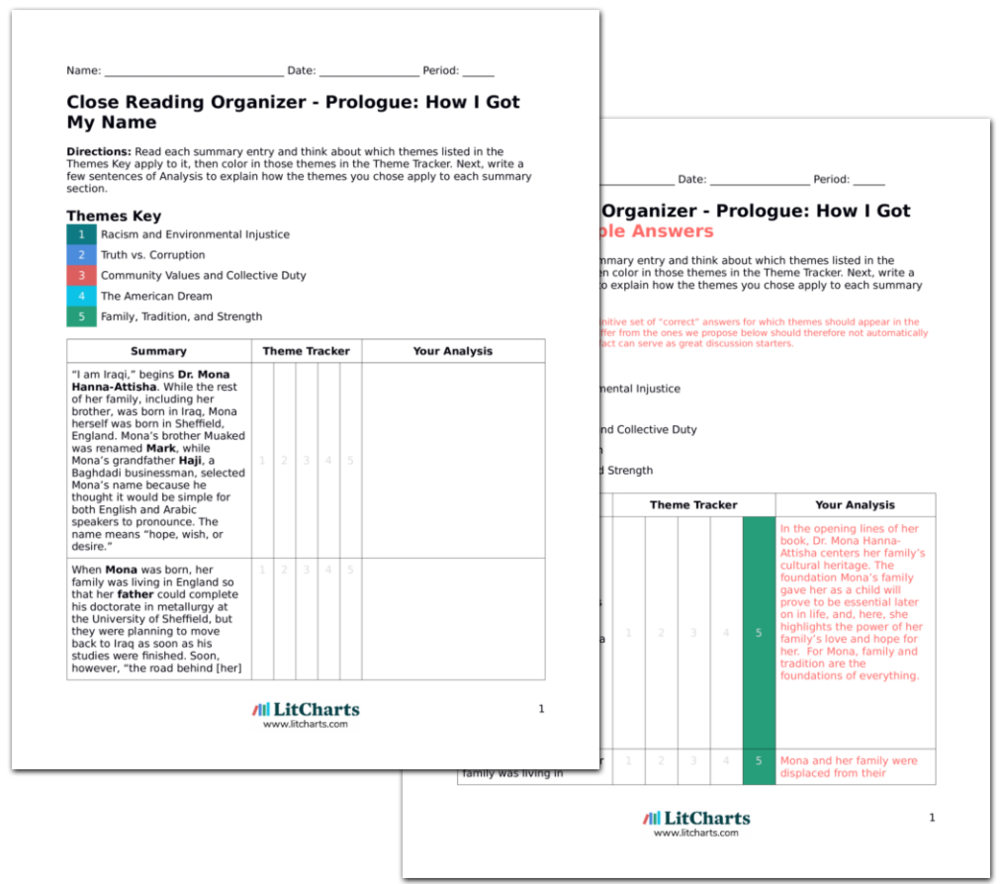