Two married couples—Mel and Terri, and Nick and Laura—sit around Mel and Terri’s kitchen table as the afternoon sun streams in through the window. The four friends are drinking gin and tonics and talking about love, which Mel (a cardiologist and former seminarian) believes is spiritual in nature. Terri recounts how her ex-boyfriend, Ed, used to beat her while telling her that he loved her. Mel is adamant that this wasn’t real love, but Terri is sure that it was. Mel asks Nick and Laura what they think, but neither of them have an opinion since they didn’t know Ed personally. During this exchange, Nick touches Laura’s hand, and Laura smiles at him. Mel remains firm that the kind of love he’s talking about is something absolute and nonviolent.

As the friends continue sipping their gin, Terri and Mel recount Ed’s two botched suicide attempts: first by drinking rat poison, and later shooting by himself in the mouth. The gun Ed used to shoot himself was also the one he later used to continually threaten Terri and Mel—he was clearly unhinged over his breakup with Terri. Eventually, Ed shot himself in a hotel room, and he was brought to the hospital on a night when Mel was on call. The shot didn’t initially kill Ed—he lived for three days, his head swelling to twice its normal size. Terri and Mel had gotten into a fight about Terri wanting to visit Ed and sit with him while he died (which she eventually did). Presently, Terri insists that Ed really loved her because he was willing to die over their failed relationship. Mel, however, remains staunch in his belief that this doesn’t constitute real love. After this story, Terri finishes off the bottle of gin, so Mel goes to get another from the cupboard.

Laura then chimes in to say that she and Nick know what loves is for them. She playfully bumps Nick’s knee with hers, and in response, Nick makes a show of kissing Laura’s hand. Terri teases the couple about their affectionate relationship, lightheartedly warning them that things will be different once they’ve been together longer than a year and a half. Just then, Mel returns with the new bottle of gin and proposes a toast “to true love.” As the friends toast, the sun washes over them, making them feel warm and comfortable.

Mel abruptly declares that he knows “what real love is,” and he goes on a long ramble about what happens to the love between couples who break up. After all, he once loved his ex-wife, Marjorie, and Terri once loved Ed. Nick and Laura were also both married to other people before they met each other. Mel says that it’s sad yet beautiful that if any of them were to die, their respective spouse could move on and fall in love again. If that were to happen, the love they’re discussing now would fade into memory. He asks whether this makes sense and prompts the others to correct him if they disagree. A concerned Terri asks Mel if he’s drunk, but Mel snaps back that he doesn’t have to be drunk to say what he’s thinking. They both sip their drinks.

Mel then changes the topic to a story about something he experienced a few months ago, hoping it’ll prove the point he’s trying to make about what love is. Terri and Mel have another tense exchange about Mel being drunk, and then Mel begins his story as he passes the gin around the table. He recounts a night at the hospital when an older couple had been brought into the ER after a bad car accident on the highway. Both the husband and wife were severely injured and in critical condition—but against all odds, the couple made it through their extensive surgeries and survived.

At this point, Mel interrupts his own story to suggest that they all go out to dinner after they finish the second bottle of gin. He says that he loves food and wishes he could have been a chef. But what he’d really love to be, he says, is a medieval knight who carries women around with him on horseback. He also likes the idea of being safely encased in a suit of armor. Terri questions what would happen if Mel came back as a serf instead, and then she and Mel get into a spat when Mel uses the word “vessels” instead of “vassals.” Mel spits that it doesn’t matter which word he uses if they all know what he means, and then he sarcastically says that being a heart surgeon is no different than being an uneducated mechanic.

As the sunlight in the room begins to dissipate, Laura and Nick ask Mel to continue his story. Terri interjects with a joke about the old couple, which offends Mel, prompting him to tell Laura that he’d fall in love with her if Terri and Nick were out of the picture. Then, Mel gets back on topic, recounting how he checked on the old couple every day during their recovery. The husband and wife were both in full-body casts, and the husband grew depressed because he couldn’t turn his head to look at his wife. Mel repeats this point several times, clearly moved by the idea of a man’s heart breaking over not being able to see his wife. He again asks the others if they understand what he’s saying, but they just stare at him.

By this point, the sun has mostly left the kitchen, and Nick thinks that they’re all a bit drunk. Mel encourages everyone to finish the gin so that they can go to dinner, to which Terri suggests that Mel is depressed and needs to take a pill. Suddenly, Mel feels compelled to call his children, but Terri reminds him that he’ll feel worse if he talks to Marjorie. They tell Nick and Laura about how Mel wants Marjorie to either remarry or die so that he can stop paying her alimony. Mel then shares a fantasy about releasing bees into Marjorie’s house so that she’ll get stung to death. He pretends that his hands are bees, buzzing them around Terri’s throat.

Mel then concedes that it isn’t a good idea to call his kids, and he suggests they go to dinner instead. Nick says that he’d be equally content going out to eat or continuing to drink; Laura, on the other hand, is starving. Terri offers to go get some cheese and crackers, but she doesn’t get up to do so. Suddenly, Mel intentionally spills the rest of his drink onto the table, declaring that the gin is gone. Terri asks what they should do next, but the four friends just sit without speaking as the kitchen goes dark. Nick hears all of their hearts beating together in the otherwise silent room. 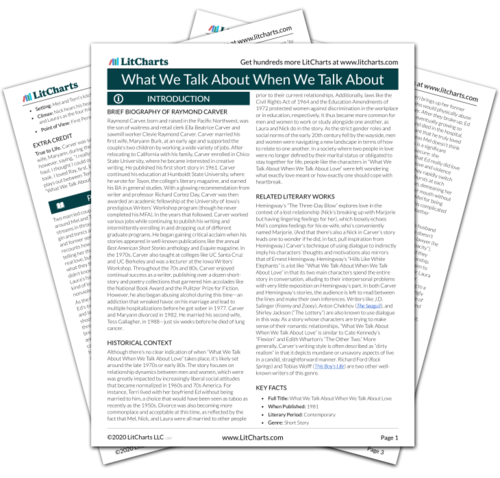 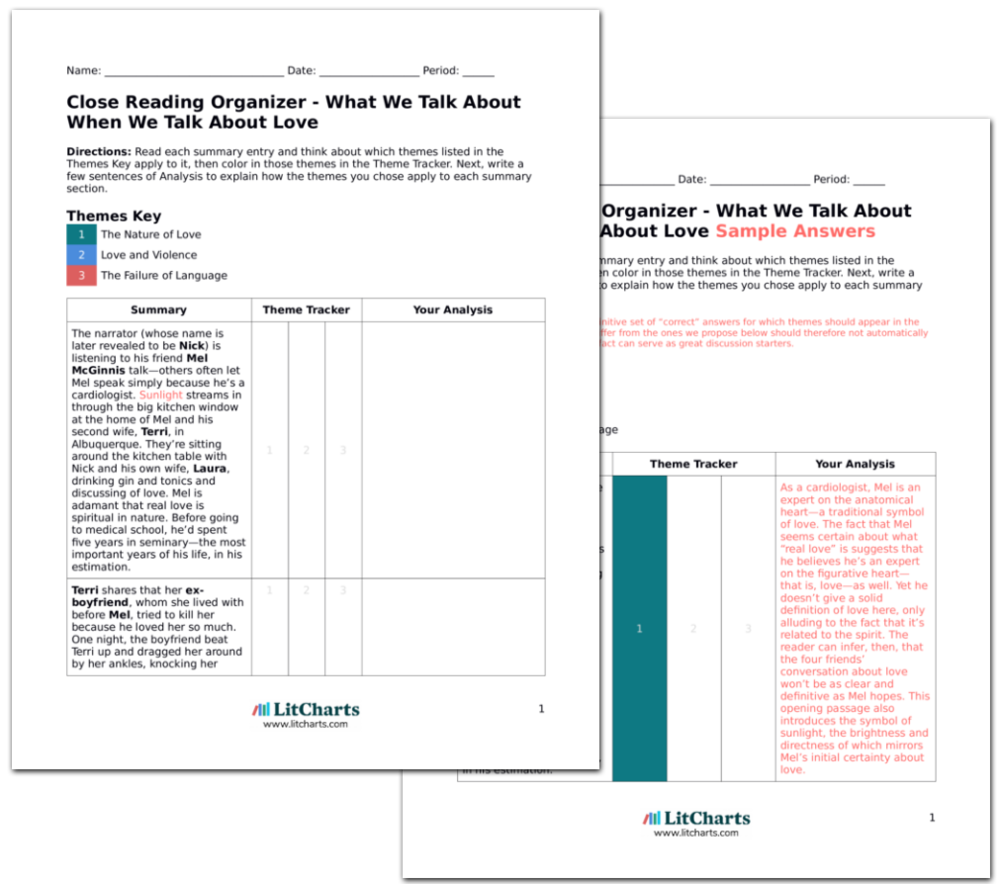