Welcome to the LitCharts study guide on Claude Steele's Whistling Vivaldi. Created by the original team behind SparkNotes, LitCharts are the world's best literature guides.

A concise biography of Claude Steele plus historical and literary context for Whistling Vivaldi.

A quick-reference summary: Whistling Vivaldi on a single page.

In-depth summary and analysis of every chapter of Whistling Vivaldi. Visual theme-tracking, too.

Explanations of Whistling Vivaldi's symbols, and tracking of where they appear.

An interactive data visualization of Whistling Vivaldi's plot and themes.

Steele was born in Illinois, just outside of Chicago, to a social worker and a truck driver. As he grew up, he became interested in the flourishing civil rights movement, and marched alongside other activists. He earned a degree in psychology from Hiram College in 1967, and later earned an M.A. in social psychology and a Ph.D. in statistically psychology from Ohio State University. Steele taught at Stanford for nearly twenty years, and later became the provost of U.C. Berkeley. However, Steele stepped down from his position in 2016. While Steele claimed to be leaving to spend more time with his family, it was widely suggested that he resigned after widespread criticism of his handling of sexual harassment cases. Steele’s first book was Whistling Vivaldi (2010); since then, he’s written numerous articles on stereotyping and discrimination in schools and the workplace.
Get the entire Whistling Vivaldi LitChart as a printable PDF.
"My students can't get enough of your charts and their results have gone through the roof." -Graham S.
Download 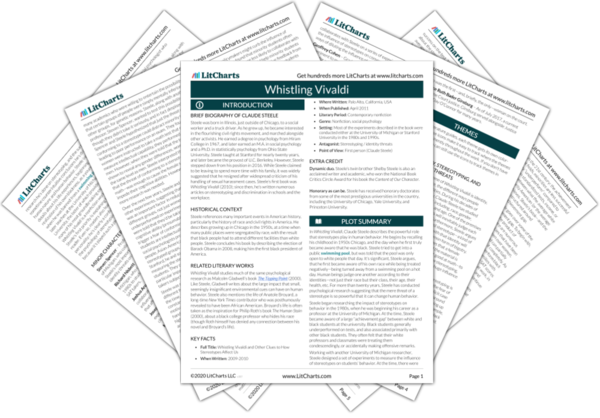 Steele references many important events in American history, particularly the history of race and civil rights in America. He describes growing up in Chicago in the 1950s, at a time when many public places were segregated by race, with the result that black people had to attend different facilities than white people. Steele concludes his book by describing the election of Barack Obama in 2008, making him the first black president of America.

Other Books Related to Whistling Vivaldi

Whistling Vivaldi studies much of the same psychological research as Malcolm Gladwell’s book The Tipping Point (2000). Like Steele, Gladwell writes about the large impact that small, seemingly insignificant environmental cues can have on human behavior. Steele also mentions the life of Anatole Broyard, a long-time New York Times contributor who was posthumously revealed to have been African American. Broyard’s life is often taken as the inspiration for Philip Roth’s book The Human Stain (2000), about a black college professor who hides his race (though Roth himself has denied any connection between his novel and Broyard’s life).
Key Facts about Whistling Vivaldi

Dynamic duo. Steele’s twin brother Shelby Steele is also an acclaimed writer and academic, who won the National Book Critics Circle Award for his book the Content of Our Character.

Honorary as can be. Steele has received honorary doctorates from some of the most prestigious universities in the country, including the University of Chicago, Yale University, and Princeton University.