George’s lack of success is a great point of conflict in his marriage to Martha, who, with her father, had expected him to accomplish more than he has. George was expected to take over the college’s presidency after the retirement of Martha’s father, but Martha suggests that her father no longer thinks George fit for the position. She mocks his scholarly work, the novel he wrote, and his general weakness. George is put into relief by the young Nick, who is praised as ambitious, successful, and bound to achieve great things. Martha seems more upset with George’s lack of success than even he is, which might be read as a projection of her own frustration with her own inability to have an accomplished professional life —a consequence of the sexism of the time, and perhaps an indication of her own shortcomings as well.

That all of the characters’ focus on ambition and relative success has only led them to the seemingly unhappy situations on display in the play suggests that success as they understand it may not be a good value or barometer to dictate one’s life around.

The ThemeTracker below shows where, and to what degree, the theme of Ambition, Success, and Failure appears in each act of Who's Afraid of Virginia Woolf. Click or tap on any chapter to read its Summary & Analysis.
How often theme appears:
act length:
Act
Act 1
1
Act 2
2
Act 3
3
Get the entire Who's Afraid of Virginia Woolf LitChart as a printable PDF.
"My students can't get enough of your charts and their results have gone through the roof." -Graham S.
Download 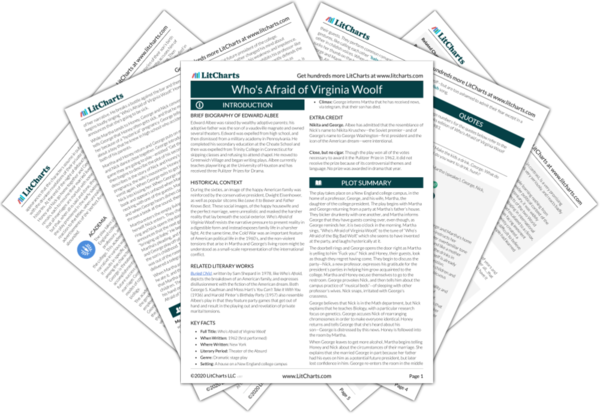 Ambition, Success, and Failure Quotes in Who's Afraid of Virginia Woolf

Below you will find the important quotes in Who's Afraid of Virginia Woolf related to the theme of Ambition, Success, and Failure.
Act 1 Quotes

I’m loud, and I’m vulgar, and I wear the pants in this house because somebody’s got to, but I am not a monster. I am not.