Download this LitChart! (PDF)
Teachers and parents! Struggling with distance learning? Our Teacher Edition on Wolf Hall can help.

Welcome to the LitCharts study guide on Hilary Mantel's Wolf Hall. Created by the original team behind SparkNotes, LitCharts are the world's best literature guides.

A concise biography of Hilary Mantel plus historical and literary context for Wolf Hall.

A quick-reference summary: Wolf Hall on a single page.

In-depth summary and analysis of every chapter of Wolf Hall. Visual theme-tracking, too.

Explanations of Wolf Hall's symbols, and tracking of where they appear.

An interactive data visualization of Wolf Hall's plot and themes.

Hilary Mantel was born in England to parents of Irish descent. Her family was religious, and though Mantel lost her faith when she was 12, she has said that she never quite lost the sense of guilt and introspection that religious teachings left her with. She studied law at university and then went on to work as a social worker in a geriatric hospital, and then as a sales assistant at a department store. She married Gerald McEwen, a geologist, in 1972, and traveled with him to Botswana, where they lived for five years, and Saudi Arabia, where they spent another four years. After they returned to England, Mantel worked as a film critic for The Spectator, and she also published her first novel in 1985, which was titled Every Day is Mother’s Day. She published several other novels, many of which won prizes, such as Fludd, which won the Winifred Holtby Memorial Prize, and A Place of Greater Safety, which won the Sunday Express Book of the Year award. Wolf Hall was published in 2009 and won the Man Booker Prize. Its sequel, Bring Up the Bodies, was published in 2012, and it also won that year’s Man Booker Prize, making Mantel the first British writer and the first woman to win the prize twice. Bring Up the Bodies was also the first sequel to win the Booker Prize. In 2014, Mantel was given the title of Dame Commander of the Order of the British Empire for her contribution to literature. The final book of Mantel’s Thomas Cromwell trilogy, The Mirror and the Light, was published in March of 2020.
Get the entire Wolf Hall LitChart as a printable PDF.
"My students can't get enough of your charts and their results have gone through the roof." -Graham S.
Download 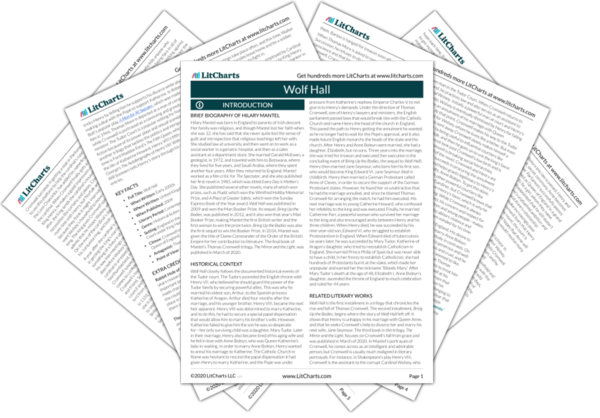 Wolf Hall closely follows the documented historical events of the Tudor court. The Tudors ascended the English throne with Henry VII, who believed he should guard the power of the Tudor family by securing powerful allies. This was why he married his eldest son, Arthur, to the Spanish princess Katherine of Aragon. Arthur died four months after the marriage, and his younger brother, Henry VIII, became the next heir apparent. Henry VIII was determined to marry Katherine, and to do this, he had to secure a special papal dispensation that would allow him to marry his brother’s wife. However, Katherine failed to give him the son he was so desperate for—her only surviving child was a daughter, Mary Tudor. Later in their marriage, Henry also became tired of his aging wife and he fell in love with Anne Boleyn, who was Queen Katherine’s lady-in-waiting. In order to marry Anne Boleyn, Henry wanted to annul his marriage to Katherine. The Catholic Church in Rome was hesitant to rescind the papal dispensation it had given Henry to marry Katherine, and the Pope was under pressure from Katherine’s nephew, Emperor Charles V, to not give in to Henry’s demands. Under the direction of Thomas Cromwell, one of Henry’s lawyers and ministers, the English parliament passed laws that would break ties with the Catholic Church and name Henry the head of the church in England. This paved the path to Henry getting the annulment he wanted, as he no longer had to wait for the Pope’s approval, and it also made future English monarchs the heads of the state and the church. After Henry and Anne Boleyn were married, she had a daughter, Elizabeth, but no sons. Three years into the marriage, she was tried for treason and executed (her execution is the concluding event of Bring Up the Bodies, the sequel to Wolf Hall). Henry then married Jane Seymour, who bore him his first son, who would become King Edward VI. Jane Seymour died in childbirth. Henry then married a German Protestant called Anne of Cleves, in order to secure the support of the German Protestant states. However, he found her so unattractive that he had the marriage annulled, and since he blamed Thomas Cromwell for arranging the match, he had him executed. His next marriage was to young Catherine Howard, who confessed her infidelity to the king and was executed. Finally, he married Catherine Parr, a peaceful woman who survived her marriage to the king and also encouraged amity between Henry and his three children. When Henry died, he was succeeded by his nine-year-old son, Edward VI, who struggled to establish Protestantism in England. When Edward died of tuberculosis six years later, he was succeeded by Mary Tudor, Katherine of Aragon’s daughter, who tried to reestablish Catholicism in England. She married Prince Philip of Spain but was never able to have a child. In her frenzy to establish Catholicism, she had hundreds of Protestants burnt at the stake, which made her unpopular and earned her the nickname “Bloody Mary.” After Mary Tudor’s death at the age of 48, Elizabeth I, Anne Boleyn’s daughter, ascended the throne of England to much celebration and ruled for 44 years.

Other Books Related to Wolf Hall

Wolf Hall is the first installment in a trilogy that chronicles the rise and fall of Thomas Cromwell. The second installment, Bring Up the Bodies, begins where the story of Wolf Hall left off. It shows that Henry is unhappy in his marriage with Queen Anne, and that he seeks Cromwell’s help to divorce her and marry his next wife, Jane Seymour. The third book in the trilogy, The Mirror and the Light, focuses on Cromwell’s fall from grace and was published in March of 2020. In Mantel’s portrayals of Cromwell, he comes across as an intelligent and admirable person, but Cromwell is usually much maligned in literary portrayals. For instance, in Shakespeare’s play Henry VIII, Cromwell is the assistant to the corrupt Cardinal Wolsey, who tricks Henry by telling him he supports his divorce while also making a deal with the Pope to support Katherine. In Robert Bolt’s popular play, A Man for All Seasons, which was made into a film in 1966, Thomas More is depicted as a man of conscience while Cromwell is portrayed as a conniving and greedy minister. The Tudor Court is a popular setting for historical fiction because of its power plays and sexual scandals, and another trilogy that tackles the politics and intrigues of the time is Ford Maddox Ford’s The Fifth Queen, which focuses on the life of Katherine Howard, Henry VIII’s fifth wife. Margaret George’s The Autobiography of Henry VIII: With Notes by His Fool, Will Sommers tells Henry’s story through his (fictional) journal entries.
Key Facts about Wolf Hall

Rabbit Hole of Research. Mantel has said that she spent five years researching historical material for Wolf Hall since it was important to her that she get the political details right. She also made character cards that stated their names and locations so she could be sure that when she put a character in a certain place in the novel, history agreed that he or she was actually there at that time. 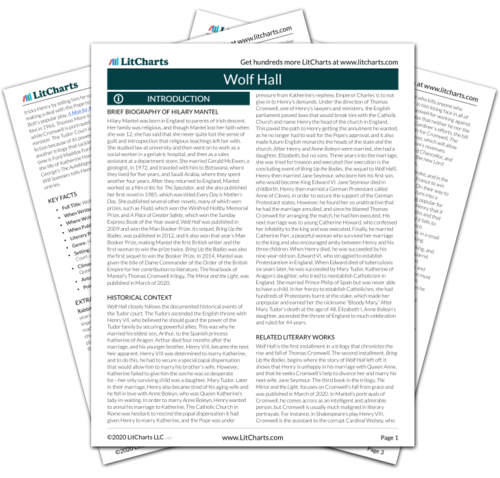 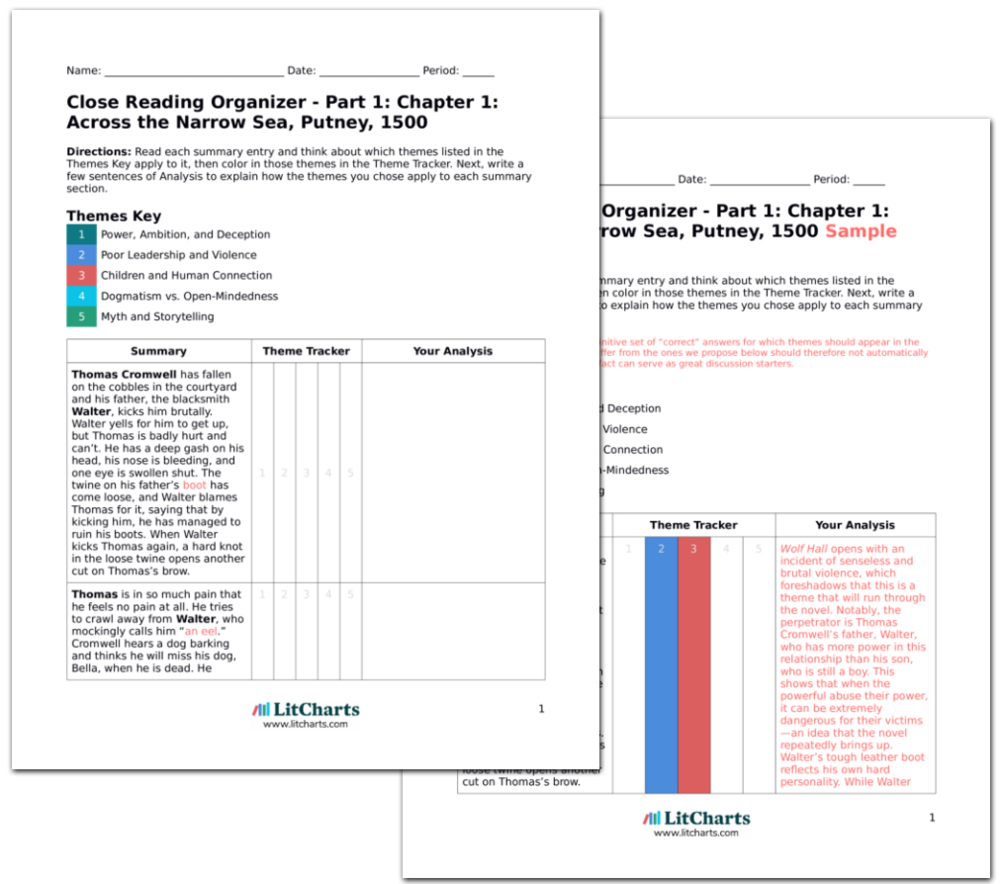