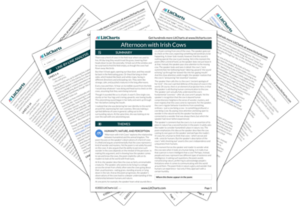 "Afternoon with Irish Cows" was written by the American poet Billy Collins. Composed during an academic stay in Ireland, the poem's subject is exactly what the title suggests—some cows in a field. The speaker relates how these cows are part of the daily fabric of life, often visible from the window of the speaker's cottage. Most of the time the cows are chewing grass or merely sitting. Sometimes, however, the cows aren't there, which puzzles the speaker. And on other occasions one of the cows will let a cry so strong and imposing that the speaker feels one of them must be in pain. Rushing out to see the cows, the speaker reinterprets these cries as the cows stamping their authority on their environment—proving their own "cowness." 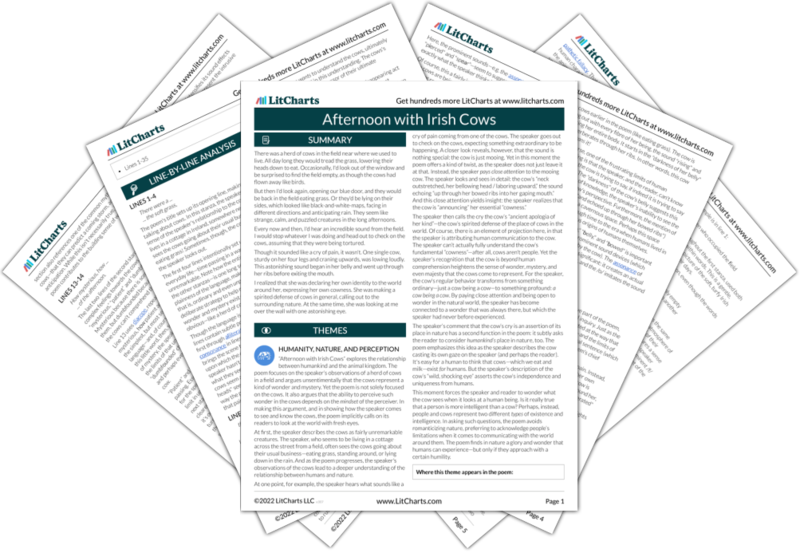 Get the entire guide to “Afternoon with Irish Cows” as a printable PDF.
Download

The Full Text of “Afternoon with Irish Cows”

The Full Text of “Afternoon with Irish Cows”

1There were a few dozen who occupied the field

2across the road from where we lived,

3stepping all day from tuft to tuft,

4their big heads down in the soft grass,

5though I would sometimes pass a window

6and look out to see the field suddenly empty

7as if they had taken wing, flown off to another country.

8Then later, I would open the blue front door,

9and again the field would be full of their munching

10or they would be lying down

11on the black-and-white maps of their sides,

12facing in all directions, waiting for rain.

13How mysterious, how patient and dumbfounded

14they appear in the long quiet of the afternoon.

15But every once in a while, one of them

16would let out a sound so phenomenal

17that I would put down the paper

18or the knife I was cutting an apple with

19and walk across the road to the stone wall

20to see which one of them was being torched

21or pierced through the side with a long spear.

22Yes, it sounded like pain until I could see

23the noisy one, anchored there on all fours,

24her neck outstretched, her bellowing head

25laboring upward as she gave voice

26to the rising, full-bodied cry

27that began in the darkness of her belly

28and echoed up through her bowed ribs into her gaping mouth.

29Then I knew that she was only announcing

30the large, unadulterated cowness of herself,

31pouring out the ancient apologia of her kind

32to all the green fields and the gray clouds,

33to the limestone hills and the inlet of the blue bay,

34while she regarded my head and shoulders

35above the wall with one wild, shocking eye.