Download this LitChart! (PDF)
Teachers and parents! Struggling with distance learning? Our Teacher Edition on Anne of Green Gables can help.

Welcome to the LitCharts study guide on L. M. Montgomery's Anne of Green Gables. Created by the original team behind SparkNotes, LitCharts are the world's best literature guides.

A concise biography of L. M. Montgomery plus historical and literary context for Anne of Green Gables.

A quick-reference summary: Anne of Green Gables on a single page.

In-depth summary and analysis of every chapter of Anne of Green Gables. Visual theme-tracking, too.

Explanations, analysis, and visualizations of Anne of Green Gables's themes.

Description, analysis, and timelines for Anne of Green Gables's characters.

Explanations of Anne of Green Gables's symbols, and tracking of where they appear.

An interactive data visualization of Anne of Green Gables's plot and themes.

Lucy Maud Montgomery was one of Canada’s most beloved and successful authors. Before Montgomery was two years old, her mother Clara died of tuberculosis. Her father Hugh soon remarried, and Montgomery was raised by her grandparents, the MacNeills, in nearby Cavendish. (Cavendish later became the basis for Avonlea in Montgomery’s fiction.) Montgomery’s childhood was lonely, and she found comfort in her imagination; she published her first poem at age 15. In 1894, she earned a teaching license and taught for one year, then studied at Dalhousie University in Halifax, Nova Scotia. At the time, it was relatively rare for women to attend university. In 1901–2, she worked for the Daily Echo newspaper in Halifax. In 1909, Anne of Green Gables, which had originally been published as a Sunday School serial, became a bestseller, quickly garnering an international following. Montgomery followed it up with Anne of Avonlea and Kilmeny of the Orchard before marrying the Reverend Ewan Macdonald in 1911. They settled in Ontario, where Montgomery had three sons, Chester, Hugh, and Ewan. Their life could be difficult because both she and her husband struggled with depression. Despite her unhappiness, writing was Montgomery’s solace, and she wrote prolifically—six more Anne novels, the Emily of New Moon trilogy, nine other novels, and more than 500 short stories. Montgomery received numerous honors during her lifetime, including Officer of the Order of the British Empire. She died a year before her husband, and both are buried in Cavendish, Prince Edward Island.
Get the entire Anne of Green Gables LitChart as a printable PDF.
"My students can't get enough of your charts and their results have gone through the roof." -Graham S.
Download 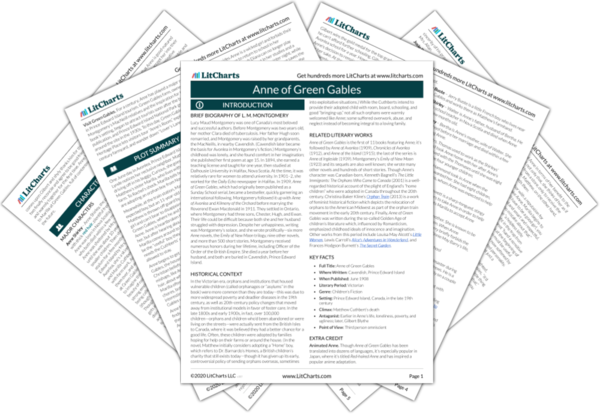 In the Victorian era, orphans and institutions that housed vulnerable children (called orphanages or “asylums” in the book) were more common than they are today—this was due to more widespread poverty and deadlier diseases in the 19th century, as well as 20th-century policy changes that moved away from institutional models in favor of foster care. In the late 1800s and early 1900s, in fact, over 100,000 children—orphans and children who’d been abandoned or were living on the streets—were actually sent from the British Isles to Canada, where it was believed they had a better chance for a good life. Often, these children were adopted by families hoping for help on their farms or around the house. (In the novel, Matthew initially considers adopting a “Home” boy, which refers to Dr. Barnardo’s Homes, a British children’s charity that still exists today—though it has given up its early, controversial policy of sending orphans overseas, sometimes into exploitative situations.) While the Cuthberts intend to provide their adopted child with room, board, schooling, and good “bringing-up,” not all such orphans were warmly welcomed like Anne; some suffered overwork, abuse, and neglect instead of becoming integral to a loving family.

Other Books Related to Anne of Green Gables

Anne of Green Gables is the first of 11 books featuring Anne; it’s followed by Anne of Avonlea (1909), Chronicles of Avonlea (1912), and Anne of the Island (1915); the last of the series is Anne of Ingleside (1939). Montgomery’s Emily of New Moon (1923) and its sequels are also well known; she wrote many other novels and hundreds of short stories. Though Anne’s character was Canadian-born, Kenneth Bagnell’s The Little Immigrants: The Orphans Who Came to Canada (2001) is a well-regarded historical account of the plight of England’s “home children” who were adopted in Canada throughout the 20th century. Christina Baker Kline’s Orphan Train (2013) is a work of feminist historical fiction which depicts the relocation of orphans to the American Midwest as part of the orphan train movement in the early 20th century. Finally, Anne of Green Gables was written during the so-called Golden Age of children’s literature which, influenced by Romanticism, emphasized childhood ideals of innocence and imagination. Other works from this period include Louisa May Alcott’s Little Women, Lewis Carroll’s Alice's Adventures in Wonderland, and Frances Hodgson Burnett’s The Secret Garden.
Key Facts about Anne of Green Gables

Animated Anne. Though Anne of Green Gables has been translated into dozens of languages, it’s especially popular in Japan, where it’s titled Red-haired Anne and has inspired a popular anime adaptation.

Visit Green Gables. For a century, Anne has played a major role in Prince Edward Island tourism. Green Gables farm, owned by Montgomery’s MacNeill relatives and the inspiration for the book’s setting, began to attract tourists soon after the book’s publication, and Prince Edward Island National Park grew up around the site in the 1930s. To this day, Green Gables Heritage Place lets visitors tour “Anne’s Room,” explore a 19th century farmyard, and wander down “Lover’s Lane.” 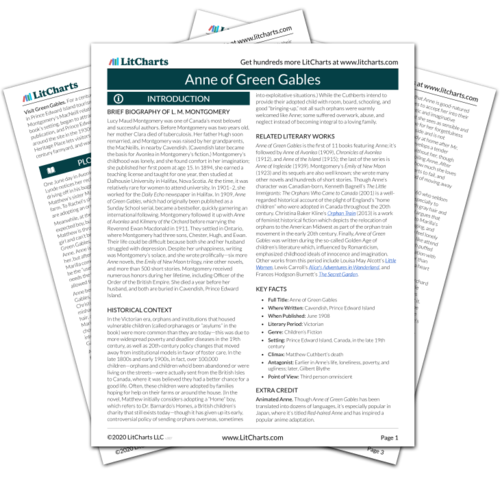 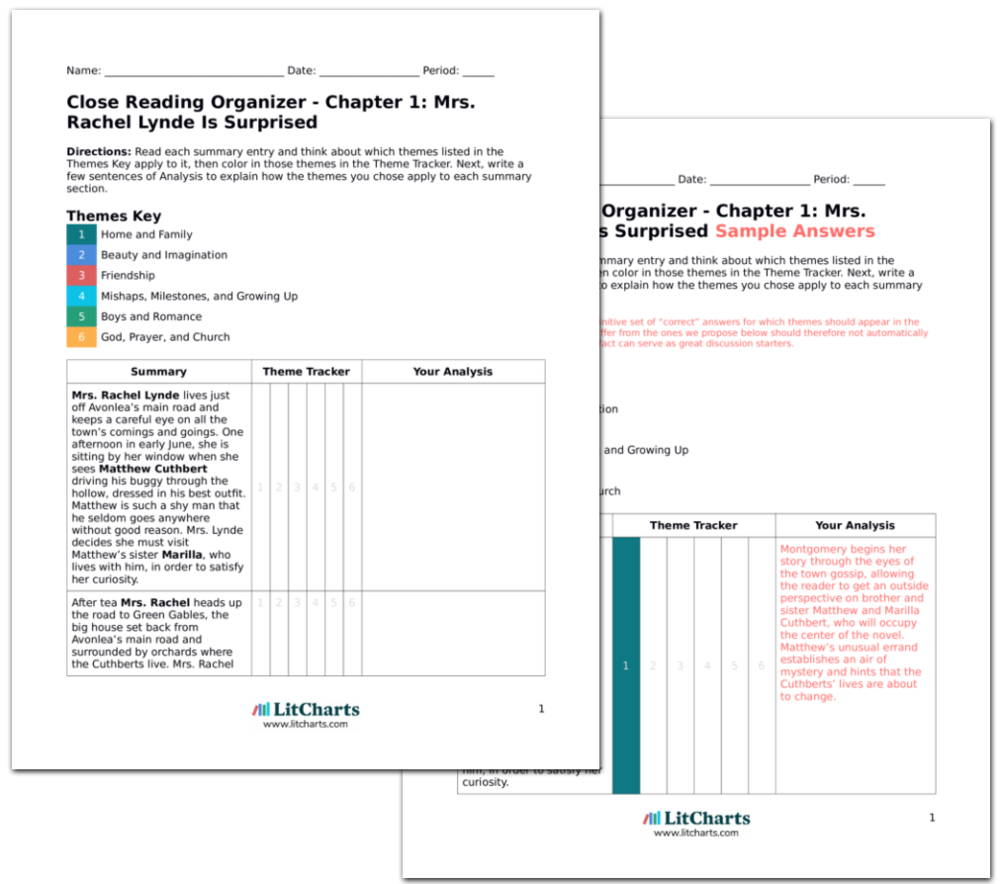