Welcome to the LitCharts study guide on Christina Baker Kline's Orphan Train. Created by the original team behind SparkNotes, LitCharts are the world's best literature guides.

A concise biography of Christina Baker Kline plus historical and literary context for Orphan Train.

A quick-reference summary: Orphan Train on a single page.

In-depth summary and analysis of every chapter of Orphan Train. Visual theme-tracking, too.

Explanations of Orphan Train's symbols, and tracking of where they appear.

An interactive data visualization of Orphan Train's plot and themes.

Christina Baker Kline was born in England, and is of Irish descent. She moved around while growing up, living in England, Maine, and Tennessee. She studied English at Yale and has a Master of Arts in Literature from Cambridge University and a Master of Fine Arts from the University of Virginia. Kline was also a Henry Hoyns Fellow at the University of Virginia and received the Geraldine R. Dodge Foundation Fellowship. From 2007 to 2011, she taught creative writing at Fordham University. She has written six novels: Sweet Water (1993), Desire Lines (1999), The Way Life Should Be (2007), Bird in Hand (2009), Orphan Train (2013) and A Piece of the World (2017). She co-wrote a book called The Conversation Begins with her mother, Christina L. Baker. The book features interviews with noteworthy modern feminists and their mothers. Kline is married and currently lives outside of New York City.
Get the entire Orphan Train LitChart as a printable PDF.
"My students can't get enough of your charts and their results have gone through the roof." -Graham S.
Download 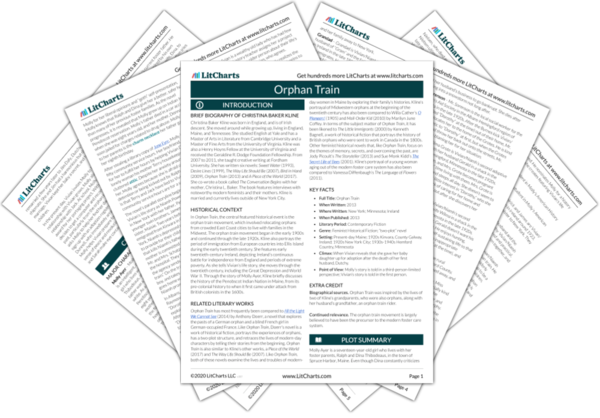 In Orphan Train, the central featured historical event is the orphan train movement, which involved relocating orphans from crowded East Coast cities to live with families in the Midwest. The orphan train movement began in the early 1900s and continued through the late 1920s. Kline also portrays the period of immigration from European countries into Ellis Island during the early twentieth century. She features early twentieth-century Ireland, depicting Ireland’s continuous battle for independence from England and periods of extreme poverty. As she tells Vivian’s life story, she moves through the twentieth century, including the Great Depression and World War II. Through the story of Molly Ayer, Kline briefly discusses the history of the Penobscot Indian Nation in Maine, from its pre-colonial history to when it first came under attack from British colonists in the 1600s.

Other Books Related to Orphan Train

Orphan Train has most frequently been compared to All the Light We Cannot See (2014) by Anthony Doerr, a novel that explores the pasts of a German orphan and a blind French girl in German-occupied France. Like Orphan Train, Doerr’s novel is a work of historical fiction, portrays the experiences of orphans, has a two-plot structure, and retraces the lives of modern-day characters by telling their stories from the beginning. Orphan Train is also similar to Kline’s other works, a Piece of the World (2017) and The Way Life Should Be (2007). Like Orphan Train, both of these novels examine the lives and troubles of modern-day women in Maine by exploring their family’s histories. Kline’s portrayal of Midwestern orphans at the beginning of the twentieth century has also been compared to Willa Cather’s O Pioneers! (1905) and Mail-Order Kid (2010) by Marilyn June Coffey. In terms of the subject matter of Orphan Train, it has been likened to The Little Immigrants (2000) by Kenneth Bagnell, a work of historical fiction that portrays the history of British orphans who were sent to work in Canada in the 1800s. Other feminist historical novels that, like Orphan Train, focus on the themes of memory, secrets, and overcoming the past, are Jody Picoult’s The Storyteller (2013) and Sue Monk Kidd’s The Secret Life of Bees (2001). Kline’s portrayal of a young woman aging out of the modern foster care system has also been compared to Vanessa Diffenbaugh’s The Language of Flowers (2011).
Key Facts about Orphan Train

Biographical sources. Orphan Train was inspired by the lives of two of Kline’s grandparents, who were also orphans, along with her husband’s grandfather, an orphan train rider.

Continued relevance. The orphan train movement is largely believed to have been the precursor to the modern foster care system. 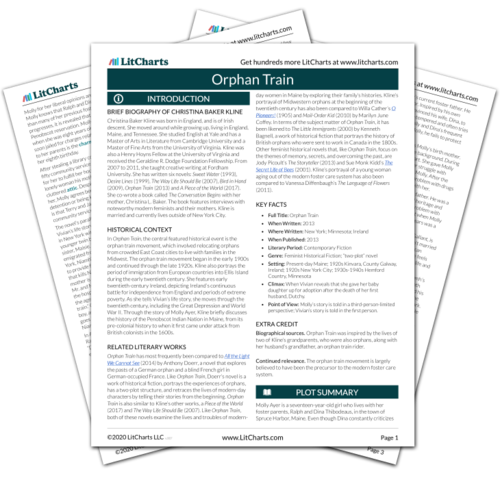 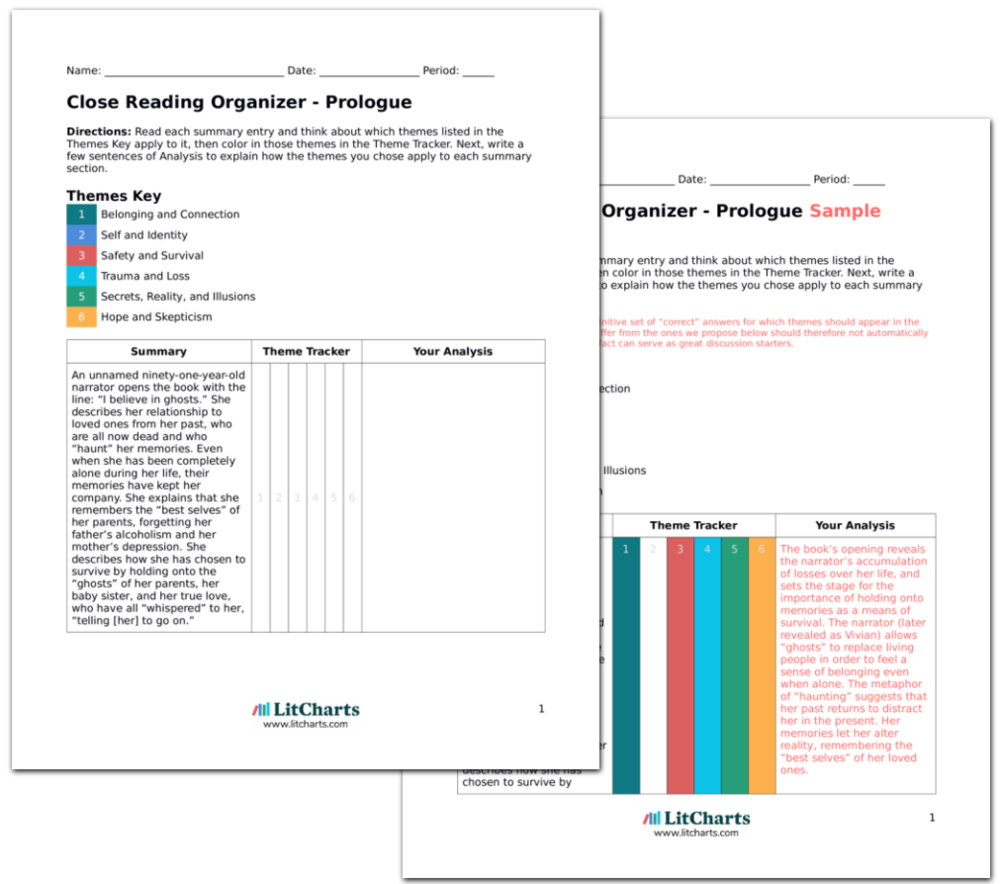