Download this LitChart! (PDF)
Teachers and parents! Struggling with distance learning? Our Teacher Edition on Little Women can help.

Welcome to the LitCharts study guide on Louisa May Alcott's Little Women. Created by the original team behind SparkNotes, LitCharts are the world's best literature guides.

A concise biography of Louisa May Alcott plus historical and literary context for Little Women.

A quick-reference summary: Little Women on a single page.

In-depth summary and analysis of every chapter of Little Women. Visual theme-tracking, too.

Explanations of Little Women's symbols, and tracking of where they appear.

An interactive data visualization of Little Women's plot and themes.

Brief Biography of Louisa May Alcott

Born in 1832, Louisa May Alcott was the child of parents who were prominent in the Transcendentalist movement. Her father, Bronson Alcott, is often referred to as the father of modern education in the United States. In spite of his brilliance, he was terrible with money, and the Alcotts were plagued with a poverty that was far less pleasant than the pious poverty enjoyed by the March family. Louisa was forced to begin working at an early age in order to keep her family from the brink of starvation. Like Jo, Alcott harbored literary ambitions and took to writing pulp fiction in order to support her family. She went on to become a writer for the Atlantic Monthly and saw her first real success with the publication of a collection of her articles, 1863’s Hospital Sketches. Alcott secured her literary fame with the publication of the first installment of Little Women in 1868. Alcott was a staunch abolitionist, feminist, and spinster up until her death in 1888.
Get the entire Little Women LitChart as a printable PDF.
"My students can't get enough of your charts and their results have gone through the roof." -Graham S.
Download 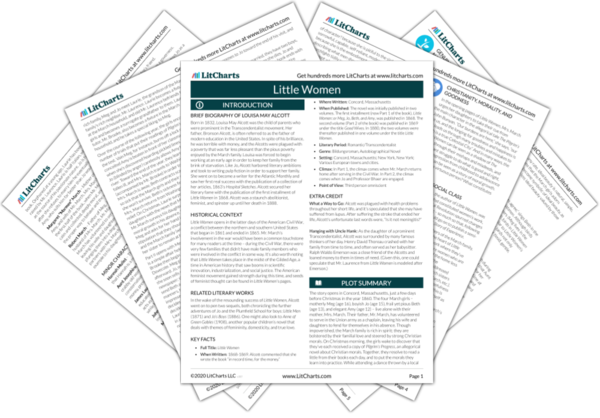 Little Women opens in the latter days of the American Civil War, a conflict between the northern and southern United States that began in 1861 and ended in 1865. Mr. March’s involvement in the war would have been a common touchstone for many readers at the time – during the Civil War, there were very few families that didn’t have male family members who were involved in the conflict in some way. It’s also worth noting that Little Women takes place in the midst of the Gilded Age, a time in American history that saw booms in scientific innovation, industrialization, and social justice. The American feminist movement gained strength during this time, and seeds of feminist thought can be found in Little Women’s pages.

Other Books Related to Little Women

In the wake of the resounding success of Little Women, Alcott went on to pen two sequels, both chronicling the further adventures of Jo and the Plumfield School for boys: Little Men (1871) and Jo’s Boys (1886). One might also look to Anne of Green Gables (1908), another popular children’s novel that deals with themes of femininity, domesticity, and true love.
Key Facts about Little Women

What a Way to Go: Alcott was plagued with health problems throughout her short life, and it’s speculated that she may have suffered from lupus. After suffering the stroke that ended her life, Alcott’s unfortunate last words were, “Is it not meningitis?”

Hanging with Uncle Hank: As the daughter of a prominent Transcendentalist, Alcott was surrounded by many famous thinkers of her day. Henry David Thoreau crashed with her family from time to time, and often served as her babysitter. Ralph Waldo Emerson was a close friend of the Alcotts and loaned money to them in times of need. (Given this, one could speculate that Mr. Laurence from Little Women is modeled after Emerson.) 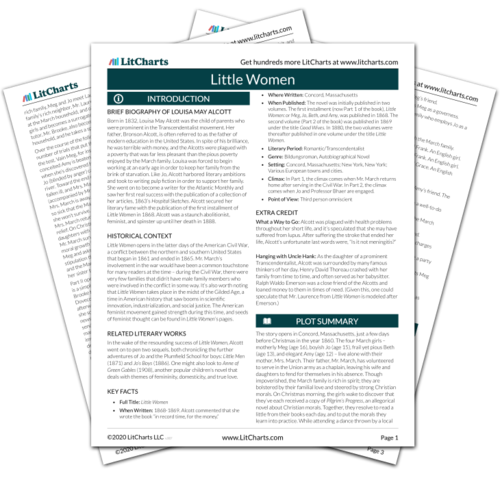 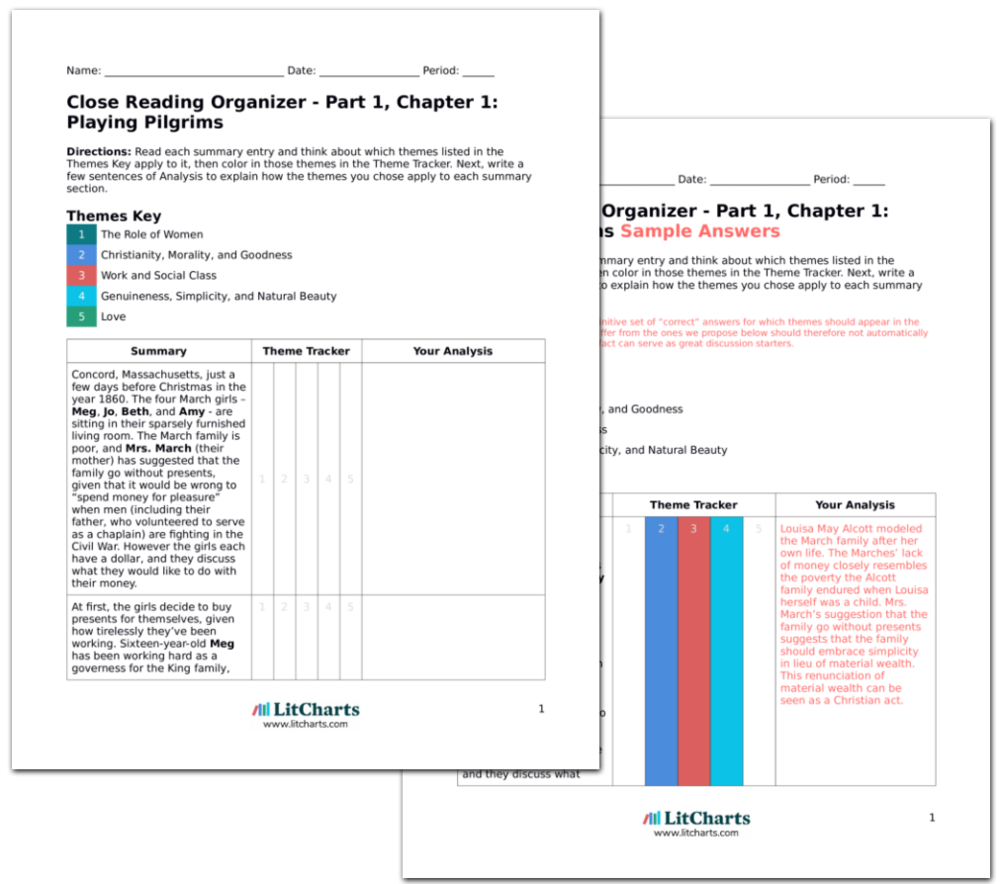