Download this LitChart! (PDF)
Teachers and parents! Struggling with distance learning? Our Teacher Edition on Art can help.

Welcome to the LitCharts study guide on Yasmina Reza's Art. Created by the original team behind SparkNotes, LitCharts are the world's best literature guides.

A concise biography of Yasmina Reza plus historical and literary context for Art.

A quick-reference summary: Art on a single page.

In-depth summary and analysis of every scene of Art. Visual theme-tracking, too.

Explanations of Art's symbols, and tracking of where they appear.

An interactive data visualization of Art's plot and themes.

Born in France to a Russian-Iranian engineer father and a Hungarian violinist mother, Yasmina Reza attended drama school and worked as an actress before rising to prominence as a playwright in the late 1980s with two back-to-back successes: 1986’s Conversations After a Burial and 1989’s Winter Crossing. Reza’s smash success came with the 1994 premiere of Art, which debuted in France and quickly inspired productions in England and America. For the three major productions of Art, Reza earned a Moliére award for best production, an Olivier for best comedy, and a Tony Award for Best Play. Reza’s success continued with 2006’s God of Carnage, originally staged in France; the play once again made a splash in the U.K. and the United States, earning Reza yet another Olivier and Tony. A 2011 film version co-written and directed by controversial director Roman Polanski brought Reza to even further prominence. The author of several novels and a biography of former French president Nicolas Sarkozy, Reza’s searing, satirical work often explores the dark underbelly of the bourgeoisie and the anxieties that come with friendship, parenthood, and social niceties.
Get the entire Art LitChart as a printable PDF.
"My students can't get enough of your charts and their results have gone through the roof." -Graham S.
Download 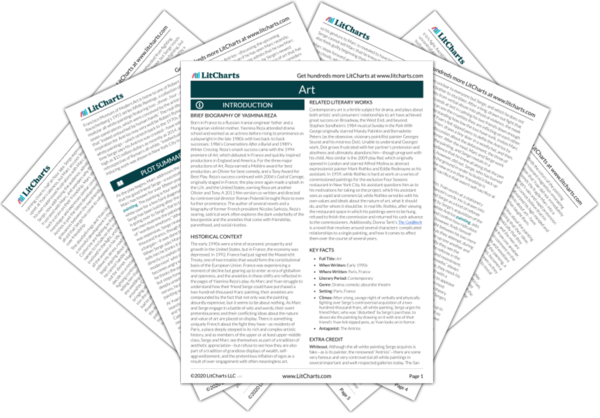 The early 1990s were a time of economic prosperity and growth in the United States, but in France, the economy was depressed. In 1992, France had just signed the Maastricht Treaty, one of two treaties that would form the constitutional basis of the European Union. France was experiencing a moment of decline but gearing up to enter an era of globalism and openness, and the anxieties in these shifts are reflected in the pages of Yasmina Reza’s play. As Marc and Yvan struggle to understand how their friend Serge could have purchased a two-hundred-thousand-franc painting, their anxieties are compounded by the fact that not only was the painting absurdly expensive, but it seems to be about nothing. As Marc and Serge engage in a battle of wits and words, their overt pretentiousness and their conflicting ideas about the nature and value of art are placed on display. There is something uniquely French about the fight they have—as residents of Paris, a place deeply steeped in its rich and complex artistic history, and as members of the upper or at least upper-middle class, Serge and Marc see themselves as part of a tradition of aesthetic appreciation—but refuse to see how they are also part of a tradition of grandiose displays of wealth, self-aggrandizement, and the pretentious inflation of egos as a result of over-engagement with often meaningless art.

Other Books Related to Art

Contemporary art is a fertile subject for drama, and plays about both artists’ and consumers’ relationships to art have achieved great success on Broadway, the West End, and beyond. Stephen Sondheim’s 1984 musical Sunday in the Park With George originally starred Mandy Patinkin and Bernadette Peters (as the obsessive, visionary pointillist painter Georges Seurat and his mistress Dot). Unable to understand Georges’ work, Dot grows frustrated with her partner’s pretension and aloofness and ultimately abandons him—though pregnant with his child. Also similar is the 2009 play Red, which originally opened in London and starred Alfred Molina as abstract expressionist painter Mark Rothko and Eddie Redmayne as his assistant. In 1959, while Rothko is hard at work on a series of commissioned paintings for the exclusive Four Seasons restaurant in New York City, his assistant questions him as to his motivations for taking on the project, which his assistant sees as vapid and commercial, while Rothko wrestles with his own values and ideals about the nature of art, what it should do, and for whom it should be. In real life, Rothko, after viewing the restaurant space in which his paintings were to be hung, refused to finish the commission and returned his cash advance to the commissioners. Additionally, Donna Tartt’s The Goldfinch is a novel that revolves around several characters’ complicated relationships to a single painting, and how it comes to affect them over the course of several years.
Key Facts about Art

Whiteout. Although the all-white painting Serge acquires is fake—as is its painter, the renowned “Antrios”—there are some very famous and very controversial all-white paintings in several important and well-respected galleries today. The San Francisco Museum of Modern Art is home to one of Robert Rauschenberg’s 1951 series White Paintings, a collection of modular all-white paintings featuring two-, three-, four-, and seven-panel pieces, which were conceived by the artist as art that “looked untouched by human hands.” The real-life inspiration for Antrios may very well be Robert Ryman, whose white paintings—which stretch back to the 1970s, the same time Serge says his Antrios was created—have sold for sums as high as $15 million dollars as recently as 2014, and a retrospective of Ryman’s all-white, “intellectual baggage”-inducing work was shown in New York City in 2015. 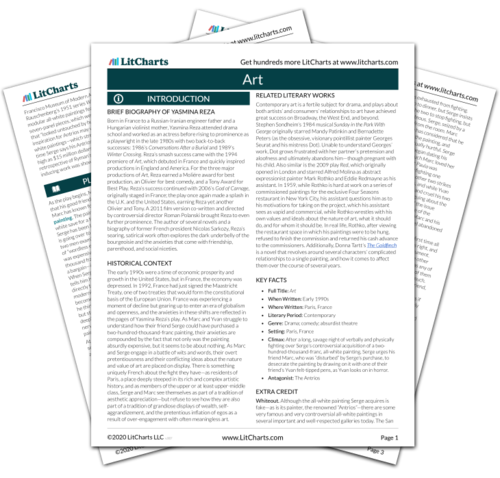 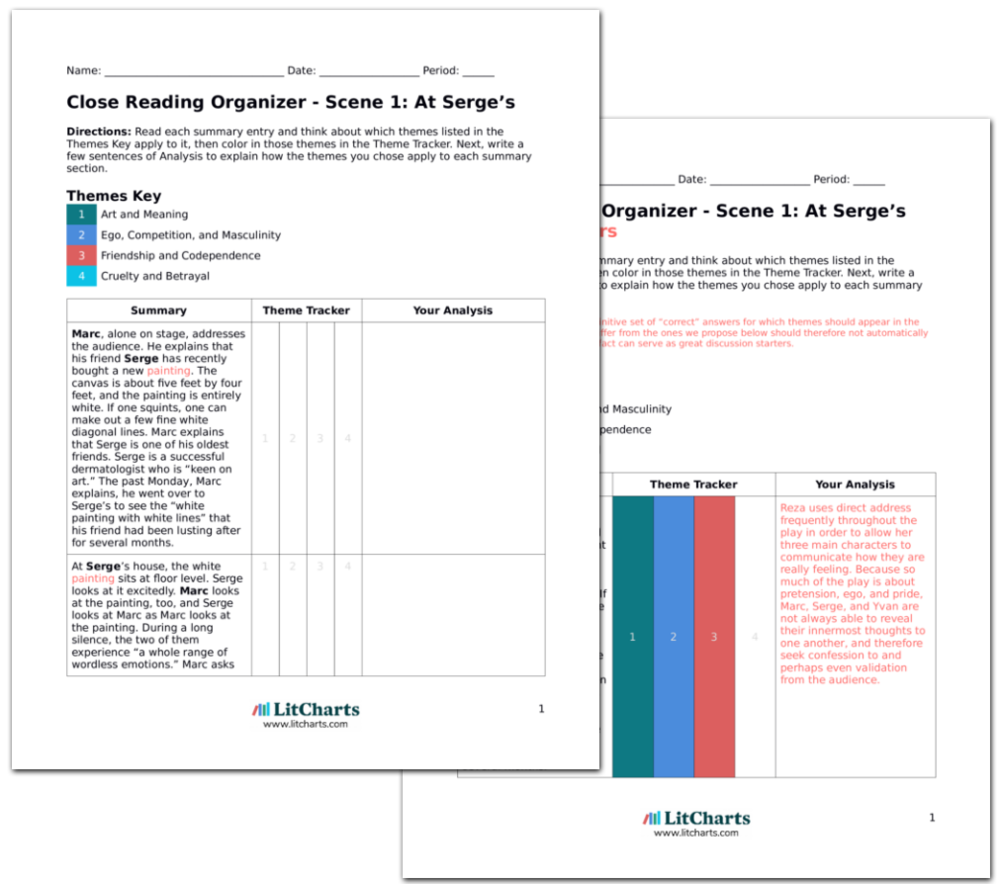