Get LitCharts A+
Tanner is the story’s protagonist. He is an orphan in England who is sent to Auckland, New Zealand to be an apprentice, but the wealthy family he works for treats him more like a servant. He meets Kitty, who is in a similar situation, and they begin a romance. After they marry, they move to a homestead of their own in the more rural area of Hiruharama. Throughout the story, Tanner is depicted as calm, resourceful, and hardworking, and he insists on seeing the best in people. For example, when the doctor calls the Tanners’ neighbor Brinkman “a crank,” Tanner says that Brinkman is a dreamer, showing that where some people might find a reason to be annoyed, Tanner finds a way to be charmed. In the story, Tanner makes one significant, almost dire mistake: he puts his second child (an unexpected twin) in the garbage, thinking the baby is just his wife’s afterbirth. The doctor, though, finds the child. That mistake, which could have become a tragedy, instead becomes a principle that guides the Tanners through their lives: namely, that they shouldn’t throw anything away, or, in other words, that they should look for the value in what at first might be overlooked, neglected, or discarded.

Tanner Quotes in At Hiruharama

The At Hiruharama quotes below are all either spoken by Tanner or refer to Tanner. For each quote, you can also see the other characters and themes related to it (each theme is indicated by its own dot and icon, like this one: 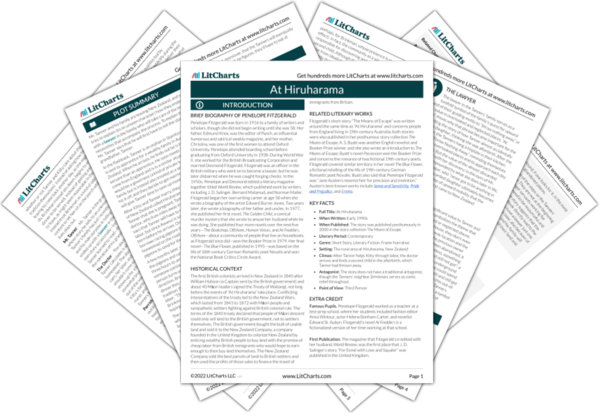 Tanner Character Timeline in At Hiruharama

The timeline below shows where the character Tanner appears in At Hiruharama. The colored dots and icons indicate which themes are associated with that appearance.

Mr. Tanner and his family have decided to leave New Zealand, and he’s excited to explain (to... (full context)

While running an errand to a dry goods store, Tanner meets Kitty, who also came to New Zealand from England. Like Tanner, she thought she... (full context)

Years later, Kitty and Tanner find a remote country place where they start to build their lives together. They don’t... (full context)

Tanner leaves the doctor’s office and goes to the post office, where he writes a letter... (full context)

More or less when they expected, Kitty goes into labor. Tanner uses the pigeons to send for the doctor and calculates that it will take him... (full context)