Wyatt and Jonas Maines identical twin boys born on October 7, 1997 in upstate New York. Their biological mother is a 16-year-old girl named Sarah, who contacts her cousin Kelly and Kelly’s husband Wayne, wondering if they’re interested in privately adopting the twins. Having been married for five years but unable to conceive a child, Kelly and Wayne jump at the chance to adopt Wyatt and Jonas. Kelly had come from a less traditional family, having been raised by her biological mother’s sister Donna. Wayne, by contrast, had grown up in upstate New York and is an “all-American boy.” He looks forward to sharing the rites of passage of manhood as the adoptive father to his two sons.

Early on, Wyatt and Jonas show very different personalities. Wyatt loves Barbies, dresses, and playing the “girl” characters when they act out stories. Jonas loves Power Rangers and acting out the “boy” characters. Wyatt is also obsessed with The Little Mermaid. One day, when Wayne is fixing up the bathroom, Wyatt joins him with his toy hammer. Wayne revels in the rare father-son moment, but Wyatt then confesses, “Daddy, I hate my penis.” Wayne comforts Wyatt but is stunned and upset by this statement. All he wants is for his son to have a normal childhood.

As Wyatt grows, he refuses to wear the masculine clothing Kelly buys for him, so Kelly starts to buy him more feminine clothes. She also does research on what Wyatt might be experiencing, leading her to think that Wyatt might be transgender. Wayne thinks that Kelly is being too indulgent with Wyatt but doesn’t stop her from buying him girls’ clothes and letting him grow out his hair. Wyatt becomes adamant that he is a girl.

Before Wyatt and Jonas start first grade, the family moves to Orono, Maine. At their housewarming party, Wyatt appears in a pink princess dress, and Wayne yells at him to put on something else. Kelly is frustrated at her husband’s intolerance. Wyatt starts to become depressed and anxious, plucking out his eyebrows and having violent fantasies. Wyatt’s friends at school accept his gender identity, but some older students start to bully and make fun of him. Kelly follows the news on transgender children and teenagers and is horrified at how much discrimination and violence they often face. She also watches a few profiles and interviews with transgender people on TV, including Jennifer Finney Boylan, a trans woman and a professor at Colby College, and Jazz Jennings, a transgender girl who is about Wyatt’s age. They become role models for Wyatt, who starts to recognize that he is not alone.

Nutt takes a brief interlude to explain some of the biological factors of sexual anatomy and gender identity. The development of these two things are due to both genes and hormones, and the interplay between those two things. Her ultimate conclusion is that sex and gender are two separate processes that can have many variations. Neither sex nor gender is binary, and the two do not necessarily have to match. When doctors have tried to “correct” a child’s ambiguous sexual anatomy with surgery, like in the cases of Cheryl Chase and David Reimer, at best they remove agency from the child in question and at worst they can be wrong about the child’s gender and scar them for life.

Kelly also realizes that it is time to find someone to help Wyatt with his transition and seeks out pediatric endocrinologist Dr. Norman Spack. Spack helps the family understand the process of transitioning, which will involve taking puberty suppressants, then the female hormone estrogen, and then finally sex reassignment surgery at age 18. Wyatt is thrilled that he will be able to avoid puberty as a boy.

At the same time, Wyatt starts fifth grade, which involves a few big changes: Wyatt changes his legal name to Nicole and starts using feminine pronouns, and Wayne publicly support’s Nicole’s transition for the first time. Additionally, in fifth grade, the bathrooms are single-sex. The officials at Asa C. Adams Elementary School agree that it would be more appropriate for Nicole to use the girls’ restroom, which is where she feels more comfortable. This plan is thwarted, however, when Paul Melanson, the grandfather and guardian of another fifth grader named Jacob, hears that Nicole is using the bathroom. He does not believe that Nicole should be using the girls’ bathroom and tells Jacob that if Nicole can use the girls’ bathroom, so can he. Jacob starts to follow Nicole into the girls’ bathroom and calls her a “faggot.” Jacob is taken to the principal’s office, but Nicole is also temporarily barred from using the girls’ bathroom. When Kelly calls the school administrator, Kelly Clenchy, and demands that Jacob and Nicole be separated and that Nicole be able to use the bathroom again, the school refuses to take action.

Jacob continues to harass Nicole, but the school becomes more and more complacent, telling Nicole that she can only use the staff restroom, not the girls’ bathroom. Additionally, various media outlets in Orono report on the incidents, and the Christian Civic League of Maine starts to publish editorials shaming the Maineses (though never by name) and arguing that the school should not allow Nicole to use the girls’ restroom. The situation grows worse and worse, with more and more media attention. The school does little to punish Jacob for his continued stalking but has an adult follow Nicole everywhere she goes.

Nutt takes another interlude to provide scientific evidence for being transgender, showing that there are areas of the brain as well as specific hormone receptors that can cause those with male anatomy to have more “feminized” brains and be transgender. She also proves how identical twins, who share the same DNA, could have different gender identities because they each have a different amniotic sac and umbilical cord in the womb. This explains how Nicole and Jonas could be twins but have different gender identities.

Nicole’s situation at school becomes so bad that Kelly, Jonas, and Nicole decide to move to Portland, Maine, while Wayne stays in Orono for work during the week and spends weekends and holidays in Portland. They also decide to sue the school district for discrimination. At their new middle school, Jonas and Nicole are instructed to “go stealth” and remain quiet about Nicole’s transgender identity, as the family fears a repeat of elementary school. This is frustrating for Nicole, who feels like she can’t be open about who she is. Meanwhile, Nicole starts to take puberty suppressants and GLAD takes up the Maineses’ lawsuit against the Orono School District.

Nicole and Jonas “go stealth” all through middle school, but at the end of eighth grade, the Maine legislature considers a bill that would allow business owners to decide who could use which restrooms. If a transgender person was denied access to the facility of their gender identity, they would not be able to claim discrimination. Wayne and Nicole both speak in front of the Maine Legislature and talk to their representatives, asking them not to pass the bill. Wayne speaks about his own experiences in learning about transgender issues, admitting his initial reluctance about Nicole being transgender, but revealing how proud he is of her persistence and her confidence in who she is. The bill is defeated.

When Nicole and Jonas begin high school at Waynflete, they decide that “going stealth” has been too painful, and so Nicole starts to come out to her new classmates. No one has an issue with this. The next year, proceedings begin for the Maineses’ lawsuit. They lose their case in their district, but they win when the case goes to Maine’s state supreme court. It is a major victory that has ramifications not only for the Orono school district, but for schools across Maine.

Nicole and Jonas graduate from high school, and both will attend the University of Maine in the fall. But there is one more hurdle for Nicole before she goes to college: having sex reassignment surgery. Nicole has made peace with her anatomy in many ways but knows that this is the final necessary step for her to feel like her body belongs to her. She is nervous, but her sex reassignment surgery goes successfully. She will take female hormones for the rest of her life, and will never be able to have children, but no one will be able to tell that she had ever had male anatomy.

Nutt writes in an epilogue informing the reader that transgender rights have evolved substantially since she started writing the book and continue to evolve. As of 2015, 18 states and 200 cities and counties bar discrimination on the basis of gender identity. Nutt concludes the book with an exchange between two third graders at Nicole’s elementary school, after Nicole had moved and gone on to middle school. A boy and girl talk casually about what it means to be transgender, and when the boy brings up Nicole, the girl comments that she didn’t know Nicole was transgender. The boy says, “Yeah, but it isn’t a big deal, you know.” The girl responds, “Oh, I know. It doesn’t really matter. As long as she’s happy.” 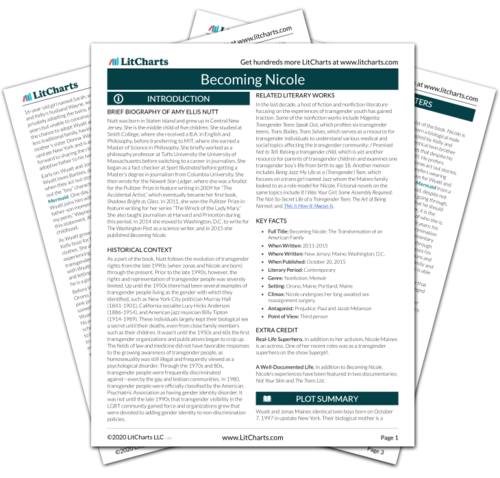 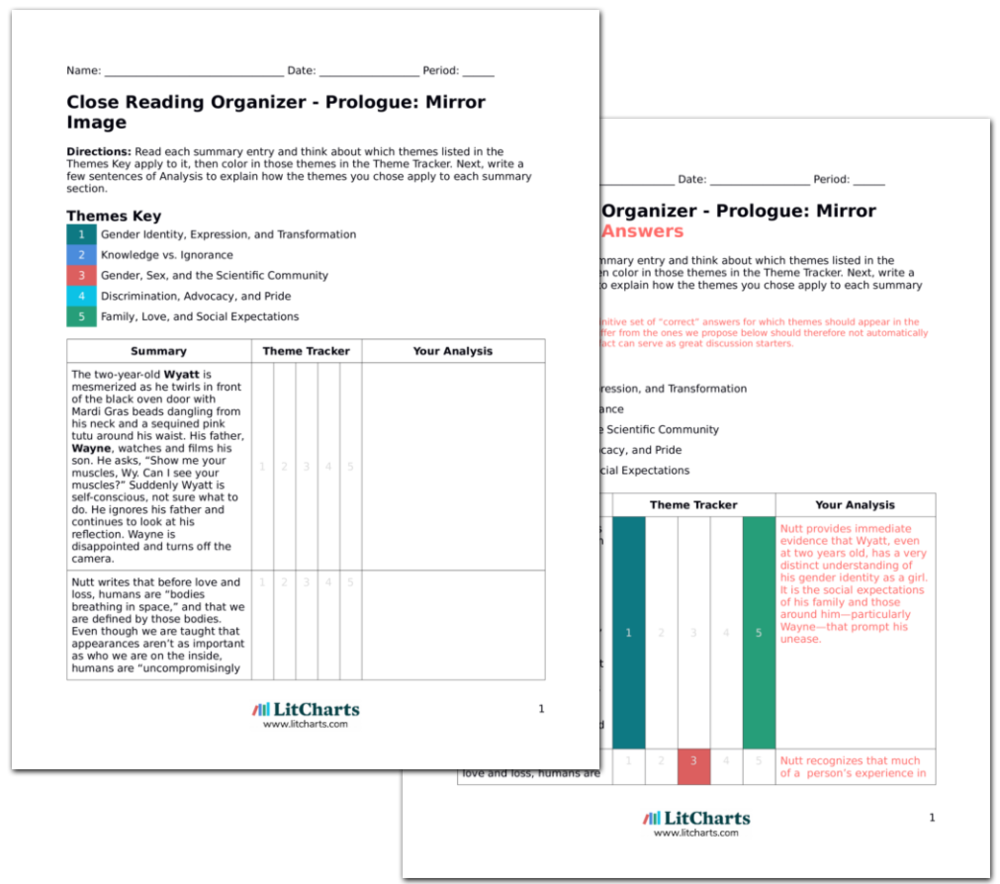