Welcome to the LitCharts study guide on Sebastian Faulks's Birdsong. Created by the original team behind SparkNotes, LitCharts are the world's best literature guides.

A concise biography of Sebastian Faulks plus historical and literary context for Birdsong.

A quick-reference summary: Birdsong on a single page.

In-depth summary and analysis of every chapter of Birdsong. Visual theme-tracking, too.

Explanations of Birdsong's symbols, and tracking of where they appear.

An interactive data visualization of Birdsong's plot and themes.

Sebastian Faulks was born in the market town of Newbury in Berkshire, England, to Peter Faulks and Pamela Lawless. Faulks’ father was a highly decorated soldier and judge, and his uncle, Sir Neville Faulks, also served as a judge in the High Court. Faulks attended preparatory school in Newbury and studied English at Emmanuel College, Cambridge. After graduating, he worked for a short time as a teacher before becoming a journalist for The Daily Telegraph and its sister newspaper, The Sunday Telegraph. Faulks began writing fiction early in his career, and in 1984 he published his first novel, A Trick of the Light. In 1986, he became the literary editor of The Independent, an online newspaper, and continued to write, publishing Birdsong to critical acclaim in 1993. After the success of Birdsong, Faulks quit working as a journalist and turned to his fiction full-time, quickly becoming an important figure in contemporary British literature. By the end of 1993, Faulks was elected as a Fellow of the Royal Society of Literature, a society founded by King George IV in 1820 to award literary merit and talent. In 2002, he was awarded Commander of the Excellent Order of the British Empire, the British order of chivalry, for his contribution to literature, earning him the honorific CBE. In keeping with the themes of war and history in Birdsong, Faulks sat on the Government Advisory Group for the Commemoration of the First World War from 2013 to 2018, where he advocated for public remembrance of the Great War. Faulks married his wife, Veronica Youlten, in 1989, and the couple went on to have three children together. Faulks and Youlten currently reside in London, England.
Get the entire Birdsong LitChart as a printable PDF.
"My students can't get enough of your charts and their results have gone through the roof." -Graham S.
Download 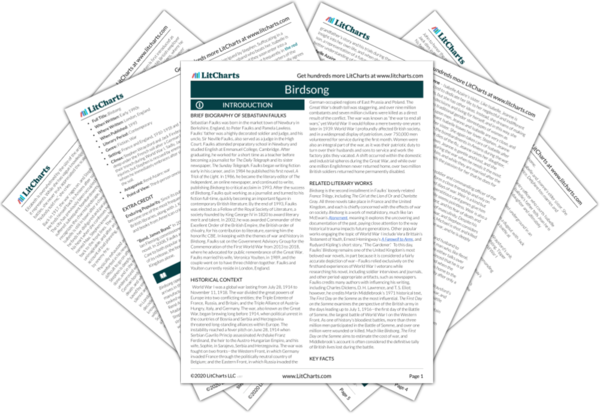 World War I was a global war lasting from July 28, 1914 to November 11, 1918. The war divided the great powers of Europe into two conflicting entities; the Triple Entente of France, Russia, and Britain, and the Triple Alliance of Austria-Hungry, Italy, and Germany. The war, also known as the Great War, began brewing long before 1914, when political unrest in the countries of Bosnia and Serbia and Herzegovina threatened long-standing alliances within Europe. The instability reached a fever pitch on June 28, 1914 when Serbian Gavrilo Princip assassinated Archduke Franz Ferdinand, the heir to the Austro-Hungarian Empire, and his wife, Sophie, in Sarajevo, Serbia and Herzegovina. The war was fought on two fronts—the Western Front, in which Germany invaded France through the politically neutral country of Belgium; and the Eastern Front, in which Russia invaded the German-occupied regions of East Prussia and Poland. The Great War’s death toll was staggering, and over nine million combatants and seven million civilians were killed as a direct result of the conflict. The war was known as “the war to end all wars,” yet World War II would follow a mere twenty-one years later in 1939. World War I profoundly affected British society, and in a widespread display of patriotism, over 750,000 men volunteered for service during the first month. Women were also an integral part of the war, as it was their patriotic duty to turn over their husbands and sons to service and work the factory jobs they vacated. A shift occurred within the domestic and industrial spheres during the Great War, and while over one million Englishmen never returned home, over two million British soldiers returned home permanently disabled.

Other Books Related to Birdsong

Birdsong is the second installment in Faulks’ loosely related France Trilogy, including The Girl at the Lion d’Or and Charlotte Gray. All three novels take place in France and the United Kingdom, and each is chiefly concerned with the effects of war on society. Birdsong is a work of metahistory, much like Ian McEwan’s Atonement, meaning it explores the uncovering and documentation of the past, paying close attention to the way historical trauma impacts future generations. Other popular works engaging the topic of World War I include Vera Brittain’s Testament of Youth, Ernest Hemingway’s A Farewell to Arms, and Rudyard Kipling’s short story, “The Gardener.”  To this day, Faulks’ Birdsong remains one of the United Kingdom’s most beloved war novels, in part because it is considered a fairly accurate depiction of war—Faulks relied exclusively on the firsthand experiences of World War I veterans while researching his novel, including soldier interviews and journals, and other period-appropriate artifacts, such as newspapers. Faulks credits many authors with influencing his writing, including Charles Dickens, D. H. Lawrence, and T. S. Eliot; however, he credits Martin Middlebrook’s 1971 historical text, The First Day on the Somme as the most influential. The First Day on the Somme examines the perspective of the British army in the days leading up to July 1, 1916—the first day of the Battle of Somme, the largest battle of World War I on the Western Front. As one of history’s bloodiest battles, more than three million men participated in the Battle of Somme, and over one million were wounded or killed. Much like Birdsong, The First Day on the Somme aims to estimate the cost of war, and Middlebrook’s account is often considered the definitive tally of British lives lost during the battle.
Key Facts about Birdsong

Enduring Popularity. Since its publication in 1993, Birdsong has become one of the most frequently borrowed books from British libraries, along with J. K. Rowling’s Harry Potter series and books from American crime writer, James Patterson.

“Bond, James Bond.” In 2006, the estate of late British novelist Ian Fleming commissioned Faulks to pen a new James Bond novel. In 2008, Faulks and Fleming’s estate published Devil May Care to both popular and critical acclaim. In the first four days of its release, the book sold nearly 45,000 copies in the United Kingdom alone.