Download this LitChart! (PDF)
Teachers and parents! Struggling with distance learning? Our Teacher Edition on Bliss can help.

Welcome to the LitCharts study guide on Katherine Mansfield's Bliss. Created by the original team behind SparkNotes, LitCharts are the world's best literature guides.

A concise biography of Katherine Mansfield plus historical and literary context for Bliss.

A quick-reference summary: Bliss on a single page.

In-depth summary and analysis of every of Bliss. Visual theme-tracking, too.

Explanations of Bliss's symbols, and tracking of where they appear.

An interactive data visualization of Bliss's plot and themes.

Katherine Mansfield Beauchamp was born into a wealthy, well respected family in Wellington, New Zealand, in 1888. Mansfield had two older sisters as well as a younger brother, with whom she was particularly close. In 1893 the family moved to the countryside. Mansfield was extremely happy in rural New Zealand and drew upon her childhood memories in later stories such as “Prelude.” Mansfield wrote fiction from a young age, publishing short stories in her school newspaper and later in a New Zealand literary journal. Mansfield moved to London, England, in 1903 and attended Queens College. She travelled Europe from 1903 to 1906 before returning to New Zealand, where she began working on short stories and published work in an Australian journal called Native Companion. Mansfield returned to London in 1908, missing the cosmopolitan life of the city and the vibrant, European literary scene. Mansfield had relationships with both men and women throughout her life and was married twice. She left her first husband, George Bowden, on the night of their wedding—possibly because of a lesbian relationship with the South African writer, Ida Baker, whom Mansfield had known since college. Mansfield later married John Middleton Murray, the editor of the literary journal Rhythm, which Mansfield contributed to. Their marriage was very volatile and they separated in 1917; Mansfield spent the rest of her life in the company of Ida Baker. Mansfield was deeply affected by the death of her brother, who died in 1915 in World War I. Mansfield was diagnosed with tuberculosis in 1917 and travelled to France for her health. During her stay in a hotel in Bandol, she wrote several of her most well-known stories, including “Bliss.” She died from tuberculosis in 1923, and many of her stories were published after her death by her ex-husband, Murray.
Get the entire Bliss LitChart as a printable PDF.
"My students can't get enough of your charts and their results have gone through the roof." -Graham S.
Download 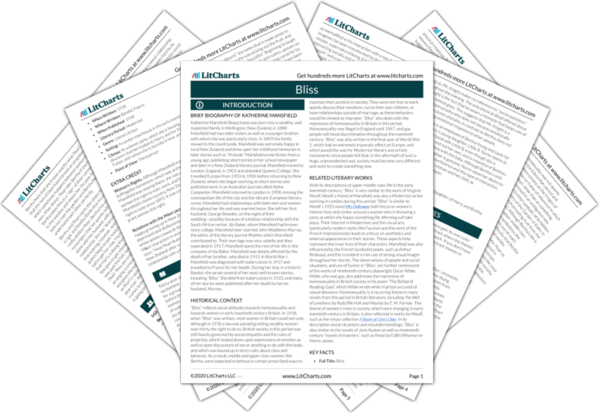 “Bliss” reflects social attitudes towards homosexuality and towards women in early twentieth century Britain. In 1918, when “Bliss” was written, most women in Britain could not vote, although in 1918 a law was passed granting wealthy women over thirty the right to do so. British society in this period was still heavily governed by social etiquette and the rules of propriety, which looked down upon expressions of emotion as well as open discussions of sex or anything to do with the body, and which was bound up in strict rules about class and behavior. As a result, middle and upper-class women, like Bertha, were expected to behave in certain prescribed ways to maintain their position in society. They were not free to work, openly discuss their emotions, nurse their own children, or have relationships outside of marriage, as these behaviors would be viewed as improper. “Bliss” also deals with the repression of homosexuality in Britain in this period. Homosexuality was illegal in England until 1967, and gay people still faced discrimination throughout the twentieth century. “Bliss” was also written in the final year of World War 1, which had an extremely traumatic effect on Europe, and which paved the way for Modernist literary and artistic movements since people felt that, in the aftermath of such a huge, unprecedented war, society must become very different and work to create something new.

Other Books Related to Bliss

With its descriptions of upper middle-class life in the early twentieth century, “Bliss” is very similar to the work of Virginia Woolf. Woolf, a friend of Mansfield, was also a Modernist writer working in London during this period. “Bliss” is similar to Woolf’s 1925 novel Mrs Dalloway: both focus on women’s interior lives and center around a woman who is throwing a party at which she hopes something life affirming will take place. Their interest in Modernism and the visual arts (particularly modern styles like Fauvism and the work of the French Impressionists) leads to a focus on aesthetics and external appearances in their stories. These aspects help represent the inner lives of their characters. Mansfield was also influenced by the French Symbolist poets, such as Arthur Rimbaud, and this is evident in her use of strong visual images throughout her stories. The observations of people and social situations, and use of humor in “Bliss,” are further reminiscent of the works of nineteenth century playwright Oscar Wilde. Wilde, who was gay, also addresses the repression of homosexuality in British society in his poem “The Ballad of Reading Gaol,” which Wilde wrote while in prison accused of sexual deviance. Homosexuality is a recurring theme in many novels from this period in British literature, including The Well of Loneliness by Rydcliffe Hall and Maurice by E. M. Forster. The theme of women’s roles in society, which were changing in early twentieth century in Britain, is also reflected in works by Woolf, such as her essay collection A Room of One's Own. In its description social situations and misunderstandings, “Bliss” is also similar to the novels of Jane Austen as well as nineteenth century “novels of manners,” such as those by Edith Wharton or Henry James.
Key Facts about Bliss

Women’s Rights. Although Mansfield was not involved in the Suffragette movement, which was active in Britain when Mansfield was staying there, she was aware of its efforts to win women the right to vote, work, and have equal rights. In Mansfield’s home country, New Zealand, women had had the right to vote since 1893. It was one of the first countries to grant women this right.

Relations with the Māori people. While Mansfield had been happy growing up in New Zealand, as a young adult she became depressed and disillusioned by the racist attitudes shown by white settlers towards the native Māori people. She includes Māori characters in some of her later fiction, such as the short story “How Pearl Button was Kidnapped.” On her return to New Zealand after college, Mansfield also had a romantic relationship with a Māori woman, Maata Mahupuku. 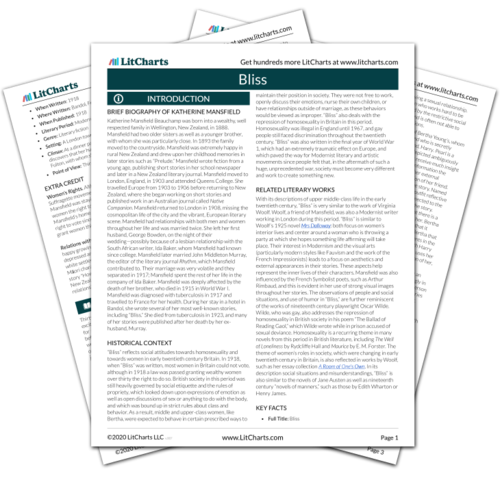 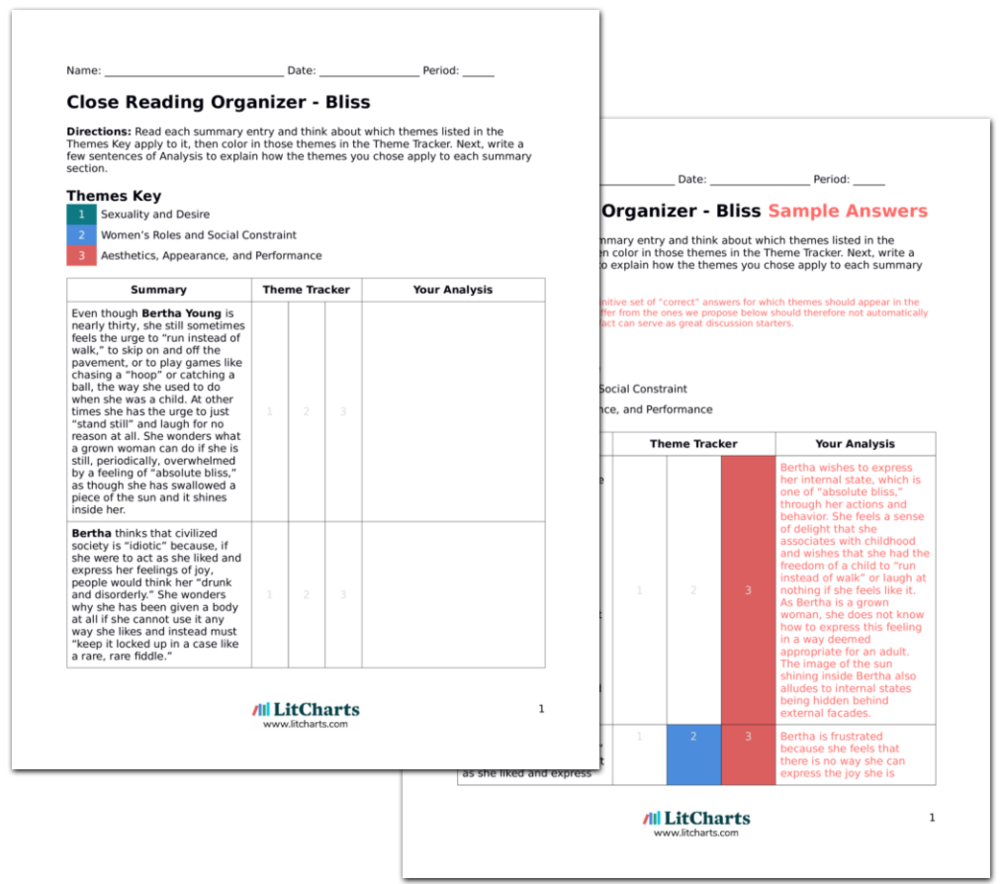