Braiding Sweetgrass is a combination of memoir, science writing, and Indigenous American philosophy and history. The book opens with a retelling of the Haudenosaunee creation story, in which Skywoman falls to earth and is aided by the animals to create a new land called Turtle Island. Robin Wall Kimmerer explains how this story informs the Indigenous attitude towards the land itself: human beings are “the younger brothers of creation” and so should humbly learn from the plants and animals that were here first. At the same time, the world is a place of gifts and generosity, and people should give gifts back to the earth as well.

In “The Council of Pecans,” Kimmerer relates some of her family history while also discussing how trees communicate with each other. Her Potawatomi grandfather was sent to Carlisle boarding school, where he and other Native children were given new names and subjected to various abuses in an attempt to rid them of their culture. Yet despite the federal government’s best efforts and the many tragic injustices that Indigenous Americans have faced over the centuries, they remain resilient, as shown by the Potawatomi Gathering of Nations that Kimmerer attends with her family.

In “The Gift of Strawberries,” Kimmerer elaborates further on her worldview that the land can be a place of generosity and wonder. Growing up, she loved picking wild strawberries, and she thinks of them as gifts from the earth. This leads her to consider the difference between gift economies and market economies, and how the nature of an object changes if it is considered a gift or a commodity. She hopes that more people will come to see our relationship to the world as a relationship of giving and receiving. In a similar vein, Kimmerer describes her father’s ritual of pouring the morning’s first coffee onto the ground as an offering to the land.

In “Asters and Goldenrod,” Kimmerer details her attempts to reconcile her field of botanical science with Indigenous knowledge and her own sense of wonder. Initially she was discouraged from focusing on anything but total scientific objectivity, but after many years she returned to Native ways of knowing and now tries to combine the that with science to paint a fuller picture of the world. Next, Robin discusses language, as she starts taking classes to learn some of the Potawatomi language. Musing on how it differs from English, she notes that in many Native languages, objects and animals are spoken of as if they are persons as well. This helps shape a culture’s view of its place in the world, and she wonders how English speakers might see the world differently if their language also granted personhood to non-humans.

In “Maple Sugar Moon,” Kimmerer remembers making maple syrup with her daughters, Larkin and Linden, and considers again her responsibility to the land and the future. “Witch Hazel” is narrated in the voice of one of Robin’s daughters, and it describes a time when they lived in Kentucky and befriended an old woman named Hazel. Hazel and Robin bonded over their love of plants and also a mutual sense of displacement, as Hazel had left behind her family home. In “A Mother’s Work,” Kimmerer muses on motherhood as she works to clear out a pond that is overgrown with algae. This becomes an exercise in the study of the pond’s flora and fauna, but also a symbol of the constant work of motherhood and trying to provide a better future for her children. When her daughters do eventually leave for college, Robin tries to ward off her sadness by going canoeing. There she is comforted by the water lilies all around her, and she thinks about their life cycle of reciprocity between the young and the old. In “Allegiance to Gratitude,” Kimmerer considers the difference between the U.S.A.’s Pledge of Allegiance and the Haudenosaunee Thanksgiving Address. The Thanksgiving Address makes a list of various aspects of the natural world and gives thanks for them all, and Kimmerer suggests that we might be better off with such a mindset of gratitude, pledging allegiance to the land itself rather than a flag or nation.

“Epiphany in the Beans” furthers the theme of reciprocity between humans and the land, as Kimmerer considers the idea that the land itself loves us because of how it takes care of us, and that our relationship to it could be very different if we were to accept its love. She then describes the Three Sisters—corn, beans, and squash—that are a staple of many Indigenous cultures and are designed to grow together and support each other in a harmonious relationship. She considers the plants to be her teachers, and she tries to pass on this mindset to her own college students.

Robin next takes a class on making traditional black ash baskets, taught by a man named John Pigeon; he emphasizes the patience and respect for the ash trees that go into the process of basket weaving. Kimmerer tries to apply his worldview to other aspects of her daily experience, recognizing the life within the origins of everyday objects. In “Mishkos Kenomagwen: The Teachings of Grass,” Kimmerer and her student Laurie attempt to integrate academic science with Indigenous knowledge, as Laurie decides to use her thesis project to study sweetgrass and how harvesting methods affect its growth. Despite the scorn of her other advisers, Laurie ends up producing data that affirms the benefits of Native practices: harvesting sweetgrass in the traditional way actually causes plant populations to flourish, not decline.

Kimmerer next returns to the theme of citizenship and allegiance, wondering what it would mean to be a good citizen of “Maple Nation”—to actively defend the forests as if they were our country. “The Honorable Harvest” focuses on the best way to consume sustainably, with gratitude and respect. The concept of the Honorable Harvest means never taking more than one needs and honoring the generosity of the plant or animal being harvested. It also means giving back to the land that sustains us. She contrasts this mindset with the contemporary capitalist habit of constant overconsumption and suggests that the only way to prevent environmental catastrophe is by bringing back the Honorable Harvest’s ideas of restraint and reciprocity.

Next Kimmerer discusses Nanabozho, the traditional Original Man in many mythologies, and how he explored his new home on earth and made it his own. Kimmerer uses this story to build the idea of “becoming Indigenous to a place,” and she considers the rootlessness of many Americans. Following the example of Nanabozho and certain plants, she suggests that non-Indigenous people try to become “naturalized” by treating the land like the home that one is responsible to, and to live as if one’s “children’s future matters.”

In “Sitting in a Circle,” Robin takes her ethnobotany students out into the woods for five weeks of field work away from civilization. Though the students are unused to living so closely to the land, after working to construct shelters entirely from plants, eventually even the most reluctant comes to appreciate all the gifts that nature provides. Later they discuss among themselves how to live more sustainably and give back to the generous land. “Burning Cascade Head” discusses the salmon of the Pacific Northwest, and the ceremonies that the Indigenous people there performed in confluence with their migrations. Kimmerer asserts the importance of ceremonies that are connected to the land itself, rather than just other people.

In “Putting Down Roots,” Kimmerer returns to the story of her grandfather and the tragedy of the Carlisle Indian School and others like it. Comparing this loss of cultural heritage to the decline in sweetgrass populations, she works at planting new sweetgrass plants while also considering how to undo the work of places like Carlisle. Next Kimmerer tells the story of Franz Dolp, who traveled to the Pacific Northwest and studied old growth forests there, and then carefully attempted to recreate similar ecosystems in places that had been logged, working towards a future of new old-growth forest.

In the book’s final section, Kimmerer introduces the character of the Windigo, a demon in many Indigenous mythologies, and uses him as a metaphor for the constant consumption and narrowminded greed of capitalist society. She then delves into the story of Onondaga Lake, which was originally a sacred place to the Haudenosaunee people—the site where a figure called the Peacemaker united five warring tribes and formed the Haudenosaunee Confederacy. In the centuries since, however, the Onondaga’s land was stolen and Onondaga Lake was overrun by chemical factories that flooded the waters with industrial waste, such that it is now one of the most polluted places on earth. There have been many efforts to restore the lake, but with mixed success. While relating this history, Robin walks the shores of the lake herself and considers how best to begin restoring our relationship to the land. An important aspect of this, she says, is changing our perception of the land: not seeing it as real estate to own and exploit, but as a living thing that takes care of us and requires our care and generosity in return.

In “Collateral Damage,” Kimmerer describes a night spent with her daughters rescuing migrating salamanders from passing cars—the same night that the U.S. began bombing Iraq in 2001—and considers all the lives that are considered “collateral damage” to the way that we live. Next she discusses the nature of fire and its importance in Potawatomi culture, and relates a prophecy about various generations of people: the final group, the people of the Seventh Fire, are destined to return to the ways of those who came before and to heal the wounds of the previous generations. Kimmerer speaks frankly about our society’s current state on the brink of environmental collapse, and she says that only drastically reimagining our relationship with the land—choosing the “green path”—will save us. Braiding Sweetgrass concludes with a story of Robin herself defeating the Windigo with the aid of plants and stories. 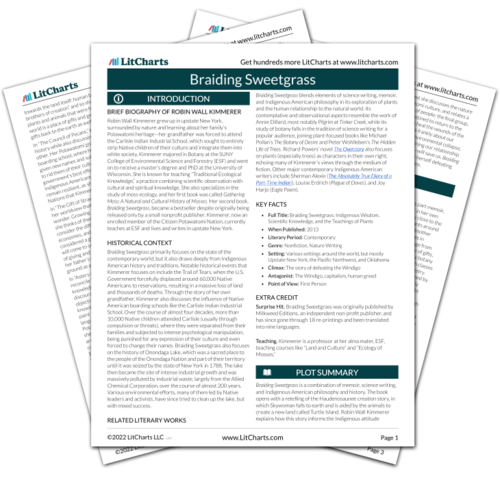 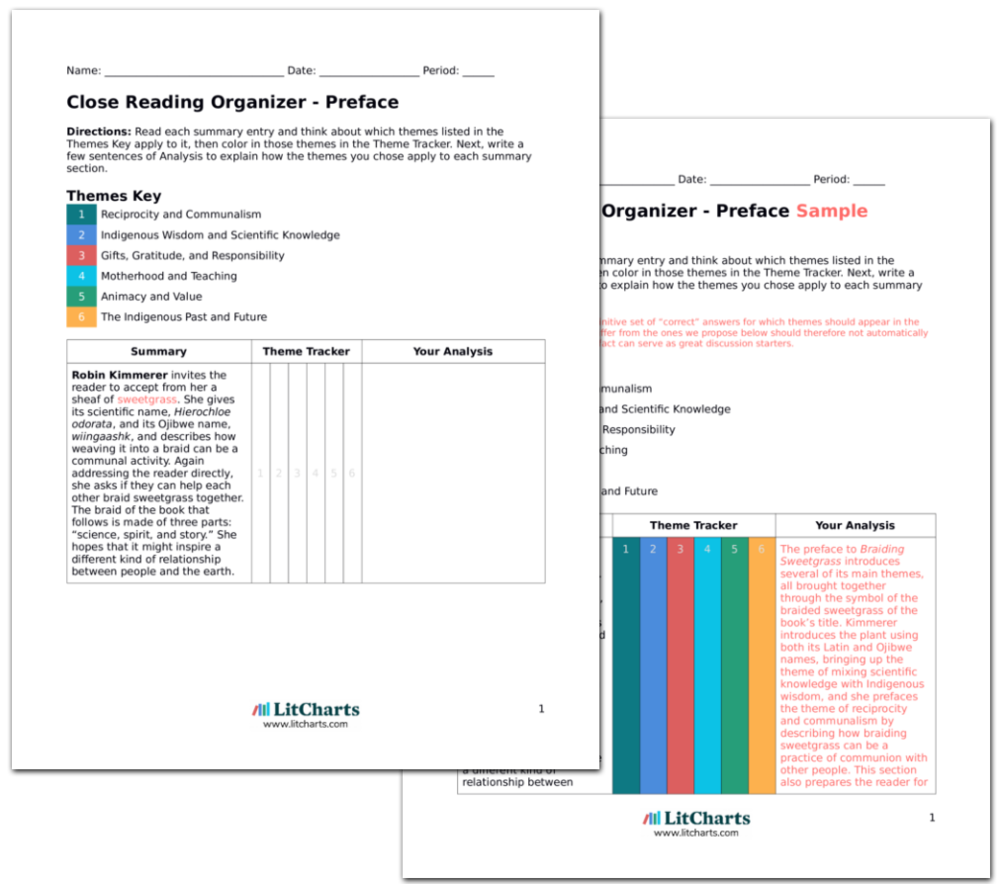