Download this LitChart! (PDF)
Teachers and parents! Struggling with distance learning? Our Teacher Edition on Code Talker can help.

Welcome to the LitCharts study guide on Joseph Bruchac's Code Talker. Created by the original team behind SparkNotes, LitCharts are the world's best literature guides.

A concise biography of Joseph Bruchac plus historical and literary context for Code Talker.

A quick-reference summary: Code Talker on a single page.

In-depth summary and analysis of every chapter of Code Talker. Visual theme-tracking, too.

Explanations of Code Talker's symbols, and tracking of where they appear.

An interactive data visualization of Code Talker's plot and themes.

Joseph Bruchac was raised by his maternal grandparents in the foothills of the Adirondack Mountains in upstate New York. He holds a B.A. from Cornell University, an M.A. in Literature and Creative Writing from Syracuse University, and a Ph.D. in Comparative Literature. Though Bruchac also has English and Slovak ancestry, he says that his northeastern American Indian heritage has nourished him the most. Along with his younger sister, Margaret, and his two adult sons, James and Jesse, Bruchac is heavily involved in projects for preserving Abenaki language and culture, including a musical group called the Dawnland Singers. Bruchac has written more than 100 books for both adults and children. Some of these include Breaking Silence (winner of an American Book Award), Sacajawea (a historical novel), collections of traditional Native American stories, and poetry. He has been awarded the Lifetime Achievement Award from the Native Writers Circle of the Americas, as well as the Virginia Hamilton Literary Award for his contributions to children’s multicultural literature. He lives in Greenfield Center, New York.
Get the entire Code Talker LitChart as a printable PDF.
"My students can't get enough of your charts and their results have gone through the roof." -Graham S.
Download 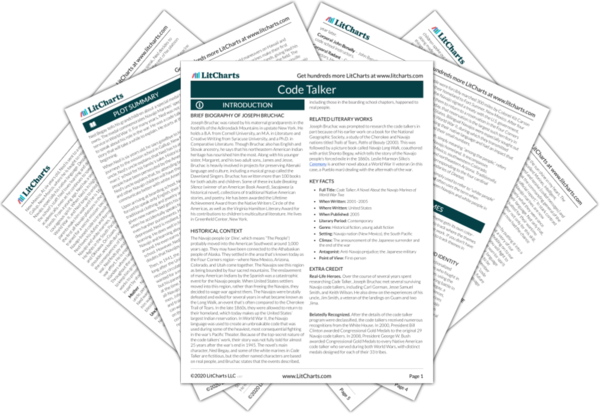 The Navajo people (or Dine’, which means “The People”) probably moved into the American Southwest around 1,000 years ago. They may have been connected to the Athabaskan people of Alaska. They settled in the area that’s known today as the Four Corners region—where New Mexico, Arizona, Colorado, and Utah come together. The Navajos see this region as being bounded by four sacred mountains. The enslavement of many American Indians by the Spanish was a catastrophic event for the Navajo people. When United States settlers moved into this region, rather than freeing the Navajos, they decided to wage war against them. The Navajos were brutally defeated and exiled for several years in what became known as the Long Walk, an event that’s often compared to the Cherokee Trail of Tears. In the late 1860s, they were allowed to return to their homeland, which today makes up the United States’ largest Indian reservation. In World War II, the Navajo language was used to create an unbreakable code that was used during some of the heaviest, most consequential fighting in the war’s Pacific Theater. Because of the top-secret nature of the code talkers’ work, their story was not fully told for almost 25 years after the war’s end in 1945. The novel’s main character, Ned Begay, and some of the white marines in Code Talker are fictitious, but the other named characters are based on real people, and Bruchac states that the events described, including those in the boarding school chapters, happened to real people.

Other Books Related to Code Talker

Joseph Bruchac was prompted to research the code talkers in part because of his earlier work on a book for the National Geographic Society, a study of the Cherokee and Navajo nations titled Trails of Tears, Paths of Beauty (2000). This was followed by a picture book called Navajo Long Walk, coauthored with artist Shonto Begay, which tells the story of the Navajo people’s forced exile in the 1860s. Leslie Marmon Silko’s Ceremony is another novel about a World War II veteran (in this case, a Pueblo man) dealing with the aftermath of the war.
Key Facts about Code Talker

Real-Life Heroes. Over the course of several years spent researching Code Talker, Joseph Bruchac met several surviving Navajo code talkers, including Carl Gorman, Jesse Samuel Smith, and Keith Wilson. He also drew on the experiences of his uncle, Jim Smith, a veteran of the landings on Guam and Iwo Jima. 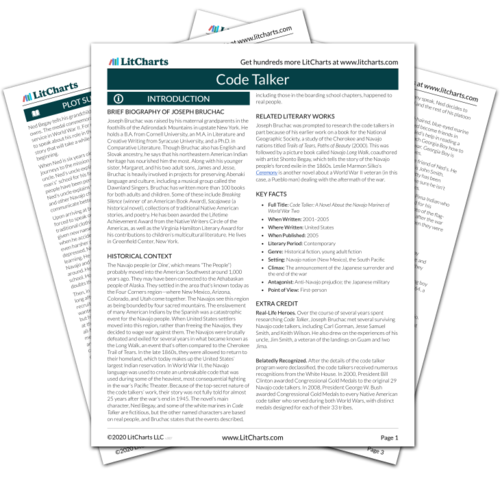 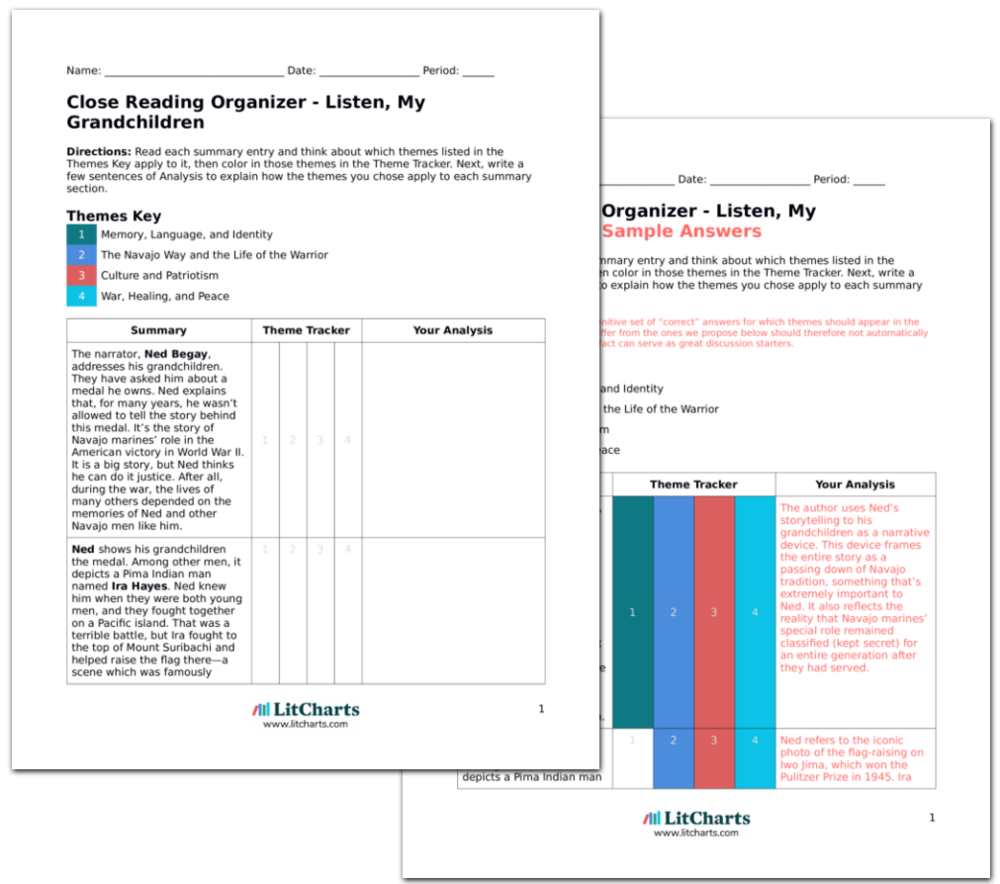